Ruth, my late mother-in-law, was an avid birdwatcher.  With her trusty binoculars, she pursued her interest wherever she settled and wandered.  She did her rounds in UK, New Zealand (where she finally settled down), Singapore, Malaya, Hong Kong, Fiji and and most remarkably in Australia when she was in her 70s.

Lely, my former student from Jurong Secondary School is another bird enthusiast.  She would spend many, many hours of her weekends in Singapore, her visits  to our abode in KL and Leicester, as well as her overseas trips (with Darby and Joan) to New Zealand; taking umpteen photographs of birds.  From Lely, I learned to recognise the names, the songs  and the plumage of some birds, especially the ones in our garden at Setiawangsa.  She has a stockpile of thousands of photographs of birds, flowers, iguana, bats, lizards and all sorts of creepy crawlies and even of our dumb domestic cats - in fact, all of God's creatures that she loves and respects.  Part of her collection is located at :

However, 8 years ago she suffered a stroke caused by AVM (Arteriovenous Malformation) a very rare congenital illness in the brain.

Though deprived of her ability to continue this great pleasure of her life, she retains her chirpy, optimistic self, just like her beloved birds!  She's still - in her spirit - flying free, joyous and rejoicing despite being in a wheelchair, just like her celebrated birds!

During the PKP ( Movement Control Order),  I am beginning to appreciate even more the peace that our feathered friends  bring: their morning chorus, the tweetings  during brunch and lunch time and the busy chirpings before bedtime in the evenings.


NOTE : On Malaysian Stamps, the country's name is firstly written in JAWI.  So why the vociferous opposition to learning Jawi in schools in 2019????

Birds I have seen and/or  heard in our garden

But here is my pride and joy - my very own discovery in our garden in Kuala Lumpur.

It had dropped(?),  fallen(?) into the garden.  I can't believe my luck, to be able to touch (and revere) this serindipity-find.  But I feel so sorry for  the mother-bird who had worked so hard to sew this nest.  My joy is this poor bird's sorrow!  Fortunately, there was no egg or baby bird in the nest.  The mother-bird must have just started on this little home of hers.

" The nest, which is similar in all the lowland Tailor Birds, is a very remarkable structure.  Most usually a single large, living leaf is curled round by twisting strands of spider's web silk round it, so that the opposite edges come together.  These are then joined by a method usually described as sewing, but really more like riveting.  Holes are punched opposite each other near the two edges, and tangled spider's webs or tree-cotton (kapok) is pushed through and teased out on each side so as to hold the edges together. ........ In the resultant pouch the nest is built of vegetable fibre mixed with kapok or lalang down, and firmly anchored by stitches or rivets pierced through the leaf. "

The Tailor Bird is just one of God's creatures making use of its God-given skills to live and survive on this earth with the minimal damage to its surroundings. But this is not my first nest.

The first time was in 1952/1953  when Ash discovered a little nest on the ground,  in the  grass-shrubbery patch not far from our local kedai Seng Teow at Kampung Abu Kassim, Pasir Panjang.   It was about 5 inches in diameter, made up of layers of tiny bits of dried leaves, grass and twigs woven into a kind of cup-shape. It was just about 2-3 inches deep, enough I suppose for a mother bird to sit on comfortably, while hatching her little clutch of eggs.  I gasped at its incredible design, so simple and  fragile and yet so practical for the pro-creation and continuity of life on this earth.  I can't remember seeing any eggs in the nest.  I let it be, and kept my discovery a secret.  I was fairly certain that this nest would be safe because no kids would find this semi-belukar a good place to play in and thank goodness, in those days, motorcycles and cars were rare in our kampung.
-
I don't know which came first - this unforgettable first encounter with a bird's nest or this reading passage from my primary school text-book;  The Radiant Way.


The above  extract is taken from ... 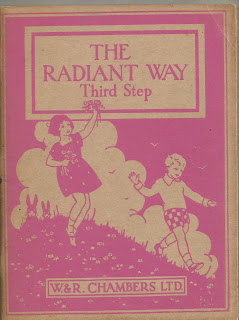 It's a shame that the names of the authors were not in the book.  However, on the Internet, I found out the authors were Jane Brown and Elizabeth L. Sinton. You can, with a bit of difficulty, just locate the illustrator's name, Rene Cloke, from the little notation on some of the really beautiful colour-drawings. This series was first published in 1933.  Other editions were made in 1953 and 1960.  I guess I must have been taught with the 1953 Reprint.  I have in my keeping the 1963 Reprint which I excavated from a little bookstore at Chowrasta Market, Penang in 1992.  Another epic discovery!!

The Perenjak / Tailor Bird is a very common bird in our kampungs and gardens.  It is a very noisy - and I can vouch for it - and secretive bird.  Look out or rather, keep your ears open for this little (only about 5 1/2 inches in size) bird.  Here's a video by Azlina Abdul on this seamstress-chatterbox.

This is what the Perenjak/Tailor Bird  (D) looks like.