Christmas - looking from the back of other eyeballs

Colin, photographer and photography-technician extraordinaire was coming for dinner on the 22nd.

so on the 21st, I took Bus  Number 22  into the city centre to do the shopping.  The bus stopped at the Railway Station to pick up a tall, strapping young man, somewhere in his mid-thirties.  He was carrying a big and heavy rucksack on his back.  He also had a name-tag on a string draped around his neck.

To put it simply: he looked absolutely knackered - but he also wore a grim and dignified countenance. From his build he could have been a policeman, a sports coach or even a British Airways pilot - of someone holding a job that required authority and responsibility.

As the bus approached the City Centre, a comfortably-dressed, middle-aged English lady proceeded to the front of the bus where the young man was sitting, as she was about to get off the bus.

As she went past, she gave him a nice smile and said  "Merry Christmas"

With a wan, worn smile, he replied, "Merry Christmas to you."

This was the rest of the conversation.   (W=English woman;  M=English man.)

W  Are you looking forward to Christmas?

M  (He began to look fed-up as it was obvious he was not prepared to natter on about the joy of Christmas)  To hell with fucking Christmas.  All for one man's birthday.  What has he done for the world?

The bus stopped and as the woman got down, he wished her, "You have a happy Christmas, love."


He was a Big Issue vendor.    The Big Issue is a weekly current affairs and entertainment magazine - put out specially to help the homeless......And his rucksack was heavily laden with copies he was hoping to sell - and this he will do without a kiosk or a covered stand.   If it rains or snows, he will stand in the biting cold, for the sake of a tiny income.

We Malay-Muslims in Malaysia, have a lot to learn from the Ummah  at the East London Mosque. 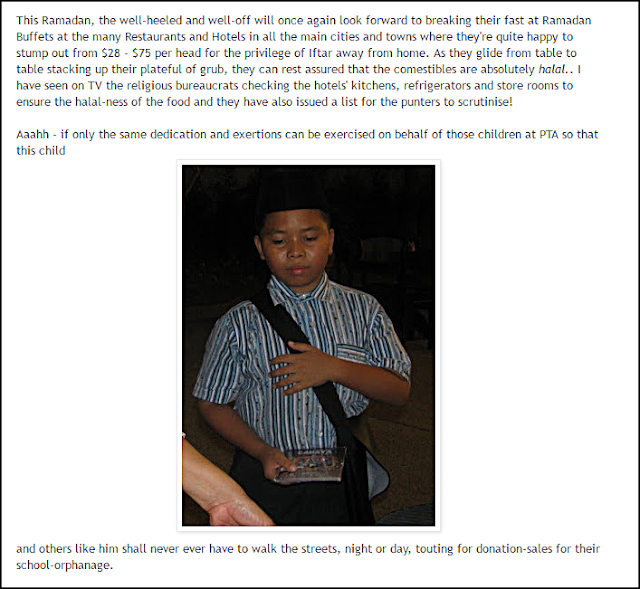 And there are also the Syrians, Yemenis, Iraqis, Libyans and Rohingyas to remember in their dark days.

Are the Muslims' pockets so shallow and our hearts so grudging?

Finally, an anecdote from my childhood to close this post about Christmas.


Makcik Ayik was my mother's best friend (during the 1940s to 1960s) from their days of being neighbours at Kampung Chantek, Dunearn Road, Singapore,


When I was about 10 years of age my mother would 'park' me at Makcik's  during the school holidays.  As Makcik had no children, my mother thought I would be good company for the dear lady.  Also it got me 'out of her hair' and gave her some peace with her other three brattages.

I quite enjoyed being the only child at her kampung house at Batu 10, Bukit Panjang.  I remembered walking along a rickety wooden bridge across a river  to get to the kampung from Bukit Panjang. Road.

That was over 60 years ago.  Today Batu 10 has been gentrified and un-Malaydified to  TEN MILE JUNCTION.

Just over 60 years ago, on the 25th day of December, I was chatting to Makcik Ayik and I said,

She replied, with a quizzical look on her face.


Looking back, I reckon my mum's good friend must be thinking what a weird Malay child I am - must be because of all that schooling!!  Christmas ??!?!!

Indeed, we have come a long, long way from those dark days of ignorance!!!!

However, we're no better or kinder than Makcik Ayik's generation.