While doing my spring cleaning (in winter) and ferreting through my books and files, I discovered a posting I had prepared in November 2015 but forgotten to publish.

I discovered it while leafing through an old notebook : 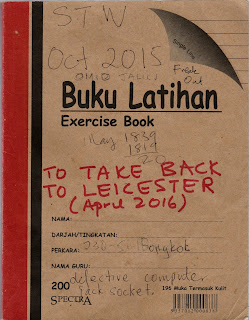 MY MISPLACED POSTING: Drafted on 15 November 2015.


Ringo Starr sang about wanting to be "in an octopus's garden in the shade .....


.... in a little hideaway beneath the waves.  We would be so happy you and me, no one there to tell us what to do".

For the past four weeks  I've been yearning for such a hideout.

Even if that is too much to ask for us two septuagenarians, we would be just as relieved to live the life of two frogs under a coconut shell - to be ignorant and unaffected by life outside the shell and its ensuing ordinances.

I would be forever ignorant about the interplay of Man's Law and God's Law. Standing in the dock in front of where I was seated in the Syariah Court were a couple, aged in their late thirties or early forties, on trial for not registering their marriage in Malaysia.  She was a Malaysian and he was an Indonesian but also a Malaysian PR.  They were married according to God's Law in Central Java, but they failed to comply with Man's Law in Malaysia and so they were fined MYR 1000 each or face a jail sentence.  The husband made a plea for a reduction of his wife's fine and they were then given a discount of  MYR 50 each.

From their demeanour and their dressing, they could easily be the husband and wife selling kuih kuih, nasi lemak and mee goring at a roadside stall in Setiawangsa, Wangsa Maju, or any KL suburb - eking out a meagre living in the 'grey' economy.

But Man's Law must take its course and this couple had to face the full brunt of the ruling of the Syariah  Court.  What if they were rich and well-connected?? I reckon, Man's Law will prevail again, this time on the side of the privileged.

When it was all over, the wife sat next to me in the women's section of the Court Room.  I was quite shattered at their plight and hesitated to give her a sympathetic glance - to let her know how I felt for her.  But she took the initiative and gave me a smile, a wan smile, but still a sweet smile despite her travail.

Days afterwards, whenever I recall the situation of that couple in the dock, it made my heart ache and it was so difficult to keep back the anger and tears - tears of sorrow for them, tears of shame for the religious diktat that imposed this punishment.

The spouse and I: we do not think fast enough on our feet - we berated ourselves for not catching up with them immediately to offer some kind of help. We were willing to part with MYR 990 to neuter a sick stray cat, to hospitalize him and cure his mange.  And yet we failed to extend a helping hand to a fellow human being!!  In my after-life, I will have to explain this grave oversight on my part!


If I had been an Octopus:

I could carry on living in my cloud-cuckoo land "under the waves" where my conversations and contacts are far more limited.

But on Friday I took a taxi to the Singapore High Commission to get a certified copy of our Singapore Marriage Certificate for the purpose of verification (Pengesahan) of our marriage  by the Wilayah's Religious Authorities.  By the way, we have been living together (not in sin) for over 30 years.

We had just passed Jelatek LRT Station when our Malay taxi driver pointed out a sad-looking middle-aged Malay lady resting on some sort of support in the middle of a grass patch, reading a newspaper.  He said. " Kesian, she's there most mornings.  I feel sorry for her.  And when she walks on the pavement with her head bent, you can see how unhappy she looks.  People say she's been told to get out of the house by either her children or her in-laws."

What a social commentator and a thinker to boot!  And straight from the horse's mouth itself - not from some pompous social media prat.

When I mentioned about how Malays in Malaysia are more "alim"  and how "Ceramahs" in many surau and mesjid are so well attended, he replied,

I was quite shocked.  Was our taxi driver stating a fact or merely rumours and grumbles?  But there's room for believing in some of his account. What does he gain by getting these complaints off his chest - he's just one of those thousands of Malays who work hard earning an honest day's living - driving endless hours in the hell-hole that best describes Kuala Lumpur's traffic.


It looks like I can't be either a frog or an octopus.  Maybe a parrot!!?

This blog and blogger, like the parrot in Monty Python's sketch below is not "quite dead, deceased, demised, passed on, ceased to be, expired, bereft of life, not quite pushing the daisies."   AsH is "resting, stunned and pining" - buffeted by the winds of a Kafkaesque drama in the land of my father, my grandfather, my great-grandfather et al.

So watch this space - you might just meet the ex-parrot again.


That posting was done in the midst of frustration and despair  dealing with JAWI and the Syariah Court and the Immigration Department.  Should I have buried it?  No way, every little anecdote of dealing with the Theory and Practice of  Authority in Malaysia  must see the light of day, even if you have to turn blue in the face.

The following posts (that means the ex-parrot is now a kicking Parrot) complement and illustrate the above posting.

But there's more to follow - our assignments with the Immigration Department.

Some day, maybe some day when I feel strong enough to spit at the sky.