AsH has been tackling a dilemma of sorts - whether to carry on writing or to put away all my thoughts and notes and references and chuck them into a box marked  "Do not open until 2044" - my 100th anniversary - when I will become like Lightfoot's "ghost from a wishing well".

This has so far been, a disturbing year in so many ways, - to simplify it, too many scales have been removed from my eyes.  Illusions will always plague your life whether you're seventeen or seventy.

This was (is?) how I feel just like Pak Belang below. 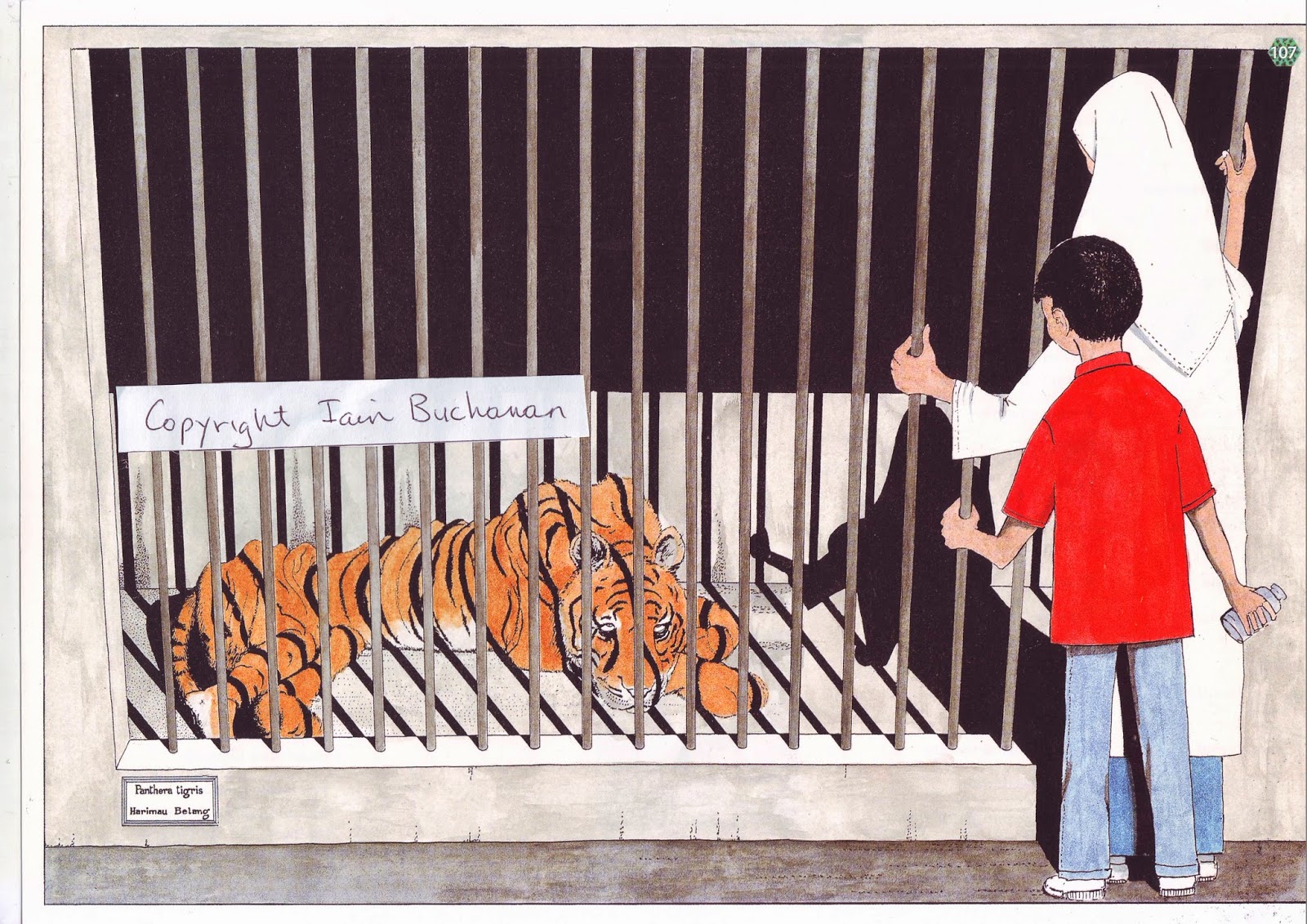 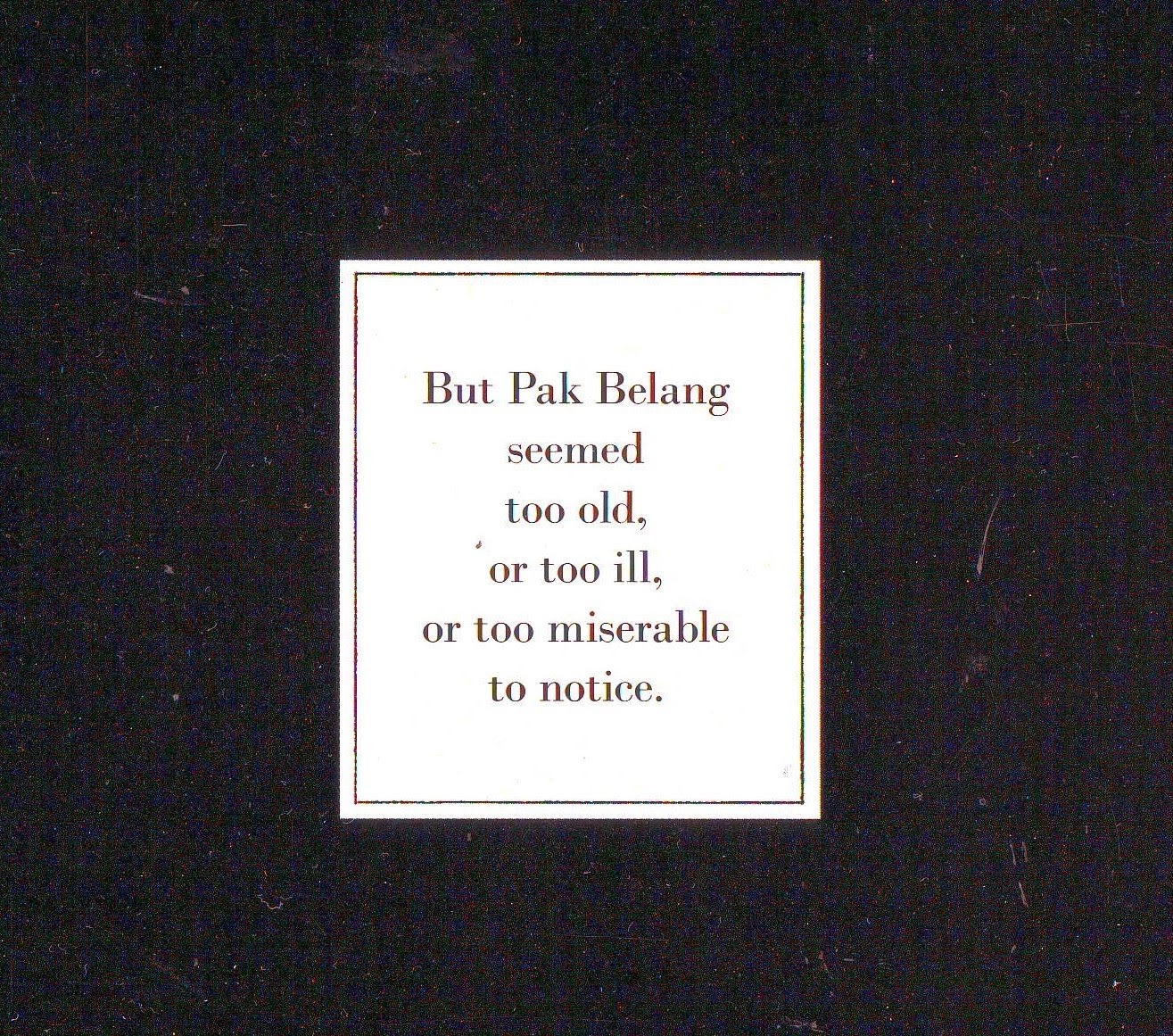 Pak Belang in the spouse's illustrated book,  "Fatimah's Kampung"  was captured when his jungle habitat was swallowed up by development and he ended up as a caged exhibit in an urban theme park.

The above illustrates Pak Belang's world before wrath, avarice, sloth, pride, lust, envy and gluttony  ( the Seven Deadly Sins according to Christianity) destroyed its world.

Especially in Malaysia today, these features, this idolisation of the Self has become the norm despite attempts to veil them in purr words  like religion, human rights and peace and love!

Yesterday I made a bad mistake. Instead of sorting out something  quick to sew from my box of cross-stitch samplers, I turned to read The Daily Mail.

You can't possibly imagine Malaysia as practising a "creeping Islamisation of the country"  because this country and the surrounding Malay Archipelago has always been an Islamic region even before Christian imperialists like Spain, Portugal, Holland, and Great Britain invaded and manipulated the Muslim Sultanates and population for their religious and economic plunder.

The Mail conveniently omitted one very special feature of Malaysia.  This is one nation where the indigenous mainly Muslim Malays were swamped by an influx of immigrants from China and India, a deliberate British policy to maximise the development (plunder) of the country's resources.  This is the only nation with such a toxic racial mixture and surprisingly has managed to look after her population without being a basket case depending on massive Western aid - and lo and behold! - has given opportunities for the non-Malay, non- Muslim denizens (and the Malay elites too, of course) to thrive and make loadsofmoney.  On top of this they can even afford to invest their surplus  in  wealthy foreign countries like Singapore, USA and Britain.

We have evangelist corporate moghuls like Tan Sri Dato Francis Yeoh Sock Ping of YTL Corporation and Tan Sri Dato Khoo Kay Peng ( Hope Foundation) who by the way has a 40% stake in Britain's upmarket Laura Ashley. The one thing that's creeping (and very rapidly too) into Malaysia is Christian evangelisation.

There's nothing new about Christian evangelisation. It has been with us for millenia although the tactics today are much more high-tech, aggressive and devious.


I reckon I have said enough in many previous postings about Judaeo-Christians' and secularist-liberals' anti-Islam agenda.   I'm almost turning blue in the face writing about this issue and like Pak Belang I'm getting too tired and too old and quite washed out.  But perhaps these images will suffice.

Recent and not-so-recent Creators of Chaos:


Here's a little story to add to the Mail's  angst about the "ban" on using the word "Allah" in non-Muslim texts in Semenanjung Malaysia.   There's a road in Leicester called Belgrave Road, the main artery from the city to the north (avoiding the M1). Hence it is a most strategic commercial route to the north of England from days of yore.

When the Indian community was expelled from Uganda by President Idi Amin, they migrated to Britain in 1972 because they were holders of British Passports.  A Gujarati entrepreneur from Uganda - Gentilal Parmar - saw the winds of upheaval and made a crucial (and lucrative) move to buy up residential and commercial properties in and around Belgrave Road.  When these 'refugees'  (mainly Hindus) from Uganda arrived in Leicester they gravitated to Belgrave Road.  Today, Belgrave Road is Leicester's Little India.

Some years ago in the late 1980s, an ex-student of mine from Singapore came to Leicester for a visit.  We took him for a drive along Belgrave Road.  This was his first trip into England.  He was shocked at the scenes and the shops and the sights.  He exclaimed,  " But where are the orang putih?  I did not come to Leicester to see my fellow Indians - we have them at home (Singapore) and we have Serangoon Road!"

The Indians from Uganda thrived and  prospered in Leicester and by 2012 the native orang putih became a minority (less than 50%)  in this ancient Roman city.  (In fact the old Roman road ran right in front of our terrace house and it still keeps its Latin name!)   The Indians from Uganda were not farmers and were not from  the poorer  rural parts of Uganda.  Being savvy urban shopkeepers, businessmen, entrepreneurs and professionals they found the right niche in this Midland city.  They became movers and shakers in Leicester's economy and politic framework.

Then in the 1990s there was a fervour and a strong vocal movement among Leicester's Asians ( Indians and anyone else for that matter, who are not Caucasians or Africans or Afro-Caribbeans, are termed as Asians.  It's as if - in Malaysia - the immigrants are lumped simply as non-Malays!) - to change the name of Belgrave Road.  They wanted to re-name it Mahatma Gandhi Road.  There was of course the expected outcry from the "natives'.  They regarded this as more flexing  of the Asians' political (and religious)  muscle.

Of course, that could not materialise.  But they managed this, at least.


Malays and Muslims in Malaysia have as much right to retain "Allah" for their own use - just as Christian and secular whites in Leicester have - to keep the name of the artery road to the north of their country England as "Belgrave Road."

Alas, this article by the Mail's Simon Tomlinson is just another hatchet job on Islam and Malaysia by an ignorant and self-righteous hack from the British press. We've seen and heard it all before - a very easy and popular topic for western liberals and  Judaeo-Christians - on their  favourite bete noir.

More of the same from my earlier postings:

1.  http://anaksihamid.blogspot.com/2011/07/simon-tisdalls-lecture.html  This is another self-righteous diatribe from another Simon from a pukka middle-class British newspaper.

Enough is Enough.  This is why I feel I'm in the same state as Pak Belang.

Please do not call it a day yet.i fervently believe we need very articulate bloggers like you.., you have seen this nation came up from scratch and are one of the few malaysians who has lived abroad for so long to know what the world is like away from our shores.those below 50s have not seen or gone through what we went through to help build this nation.its only through atrticulate ppl like you that younger malaysians are able to appreciate what we have now and how far we have gone.please do keep on writing.

As always, a beautiful posting. Do carry on, Ms Hamid. I'm banking on you for inspiration here ..

Thank you for your kind thoughts. I do hear you and appreciate your view of my contribution, albeit just a little drop in a huge ocean.

I do despair at the shenanigans that goes on with the Malays. And when I see with my own eyes a neighbour's ( a member of academe) teenage (hijabed) daughter refusing to eat Malay 'kuih' and food, my heart sank.

I foresee more Luncais being bred and thriving in this Semenanjung.

And I say, what the hell for?

But voices like yours and IdrisMdIsa ( Emulating S'pore Part 1) reminds me that it can be worthwhile. Bless you.

I recalled how I 'coaxed' you and your classmates to enjoy writing your Composition by using the Beatles "She's Leaving Home" and it worked.

Perhaps for me I need "Across the Universe".

All the more reason you should continue Nor !
Never mind those that might hurt you.
Look at those, and there are more, the silent majority, (like me) , who have benefited from your writings.
And there are also those who wouldn't have known, if not for your writings !

Remember the old saying, "Sticks and stones may break your bones but words can never hurt you".