This is a continuation of  the posting 'Holier than Thou - Part 1'   regarding the Archbishop of Canterbury's (ABC) harangue of Pakistan and Muslims after the killing of Pakistan's Christian Minister of Minorities on 2 March 2011.

In paragraph 10,  the ABC wrote : 'It is heartbreaking to see those we count as friends living with the threat of being coerced and menaced into silence .............  They need to know the support of Christians and others outside Pakistan for their historic and distinctive vision.'  In other words, those who threaten our brethren will have us, the Christian West, to answer to.

In that case the worldwide Christian Congregation  and their Secularist sidekicks in the West should not begrudge or castigate the Ummah and especially  minority Muslims in USA, Britain and Europe for declaring their sympathy and support  for Muslims in Palestine, Gaza, Iraq, Afghanistan, Bosnia, Chechnya, Mindanao, Myanmar, and Pattani who suffer more than  'the threat of being coerced and menaced into silence.'  In fact the 'historic and distinctive vision (s)'  of these nations have been pummelled and bombed into pieces, overwhelmingly by the Christianist-Secularist Masters of the Universe.

In calling for a 'civic recognition' of non-Muslims in Pakistan and 'guarantees of security' for the brethren of the late Christian Minister for Minorities  the ABC seemed to be a little amnesiac about the draconian Terrorism Act 2000 (Tact) and the anti-Terrorism Crime and Security Act 2001 (ACTSA) which virtually turned Muslims in Britain into a suspect community.

This resulted in a regime of stop and searches, arrests, sweeps and raids sanctioned by the law. Young male Muslims were profiled as potential terrorists when they prayed at a particular mosque or visited internet sites dealing with Muslim causes or simply for  wearing traditional Muslim outfit.   You are presumed guilty unless proven innocent.   In this atmosphere, self-righteous hostility grew against Muslims - mosques were vandalised and cemeteries desecrated.

And so, when ABC in Paragraph 5 stated that 'a just Muslim state, no more and no less than a just Christian or secular state, had to provide for the rights of its minorities', he seemed to put on his blinkers about what Muslims have to endure as minorities in USA, Britain and Europe.  Even the battered fate of Muslim nations like Palestine, Gaza, Iraq and Afghanistan could not get into his reckoning.

After all, the crown of victimhood is also worn by minority Muslims in western countries.  Take one example of Nawaz Malik's experience on 23 November 2010:  Detained at (Heathrow) airport ' for no other reason than  I'm a Muslim returning from the Hajj'.  Read  http://www.muslimnews.co.uk/paper/index.php?article=4994

However one must be clear that this 'discrimination' against Muslims was not just because of 9/11 in New York or 7/7 in London.  The animosity towards Islam in Western religion and culture carries a long history  and 9/11 especially cut deep into the psyche and ego of the West.  Bush and Blair, two  devout Christian leaders of the two most powerful countries in the world  launched  the War on Terror (by Muslims of course) - thus recommencing the Crusade.

As for the 'populist illiteracies of modern extremism' in Islam (paragraph 7) ,  this should be seen in the context of similar extremist illiteracies of both Christian and secular cultures, in their politics, their media and their literature.

"Any death diminishes me' wrote John Donne.   That is a sentiment that we all hold dear. 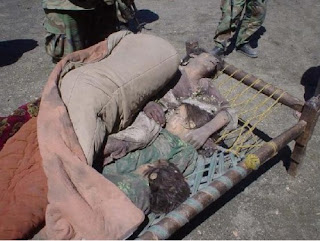 On 1 March 2011, 9 Afghan children aged 8-14 were attacked and  killed by American helicopter and artillery fire while they were collecting firewood in Darah-Ye-Pech district of northeastern Kunar Province.  They were blown to bits.  They were just minding their own business trying to help their parents to eke out a decent living in their war-torn and poverty-stricken country.  Very little was seen or heard in the Western media about  this ghastly massacre.  I could not find any image of  the agonising cries and grief of their parents and siblings and friends or of their funeral.  But the above photo will have to do because this is all that they and other murdered children of Islam are entitled to.

When Shahbaz Bhatti, the Christian Minorities Minister in Pakistan was gunned down in his car on 2 March, the print and electronic media in Britain gave the news full publicity from the event of the death up to the funeral and of course the Archbishop of Canterbury's lament. 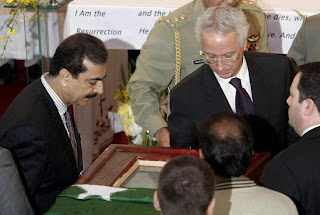 And above is a photo of the Minister's funeral attended by the PM of Pakistan and the US Ambassador.

Death is supposed to be the great leveller.

May all  9 children (al-fatihah) and the Minister rest in peace.


The rain it raineth on the just
And also on the unjust fella.
But chiefly on the just, because
The unjust steals the just's umbrella.
(Charles Bowen 1835-94)
Posted by anak si-hamid at Sunday, March 20, 2011

The facts, argument and history put forward are just brilliant.. worth all the waiting..

Sorry it took so long. This posting required some 'research' and fine tuning.

It always exhausts me, writing such a riposte. But my old dad would have wanted me to do a proper job.

Once again thank you for reading and for the comment.

Time these double standards be exposed for all to see.

Afraid it's getting worse and worse - the hypocrisy and double standards.

Hope you both are enjoying the season of the lambs - the spring, not the barbecues!