Thirty five years is such a long , long time ago.  Margaret Thatcher started her reign in 1979, the Iranian Revolution shook the world in 1979, Anwar Sadat and Menachem Begin signed the Camp David Accord and Russia invaded Afghanistan.  I was blissfully unaware of these happenings because I lived and worked in Singapore where life was very predictable and comfortable, revolving around shopping, teaching and more shopping.  I even believed that Ronald Reagan, the President of the US was the next best thing after sliced bread!!  That was how politically idiotic and naive I was.

Then in 1977 I decided to deviate from the straight and narrow.  My career was careering nowhere and I decided to up sticks and get a job in Brunei.  This I did in February 1978.
Read  : http://anaksihamid.blogspot.com/2012/04/another-tale-or-two.html

And what a change it was!  I must say those short (compared to 10 years teaching in Singapore) years in Brunei gave me so much more - in the warmth and camaraderie of my colleagues -  Yvonne, Munah and later Asmah in Jabatan Ilmu Alam.

Yvonne and I were - I reckon- the only two women expatriates in Maktab Perguruan Sultan Hassanal Bolkiah Brunei.

When Munah  (Head of Department) and I went to the Airport as the 'reception committee' to welcome the new lecturer Dayang Yvonne de Souza, we had this picture in our heads and how we laughed ourselves silly over it.  We imagined a middle-age, slightly plump Eurasian lady wearing horn-rimmed glasses with a small short-strapped black handbag tucked under her arm!  Well, the ravishing creature we got caused quite a stir at the College, especially among the male lecturers.  During the first few weeks we would see a parade of men (married and single) strolling past our room to have a look at the new member of the Geography Department.  Some of the braver ones would talk to her, calling her Yonne because they did not know how to pronounce the 'v' in Yvonne's name.  Munah and I observed the show and had to gulp so many giggles.

The three of us and later four when Asmah came to join the Department, got on like a College on fire and built up a strong professional and personal bond. 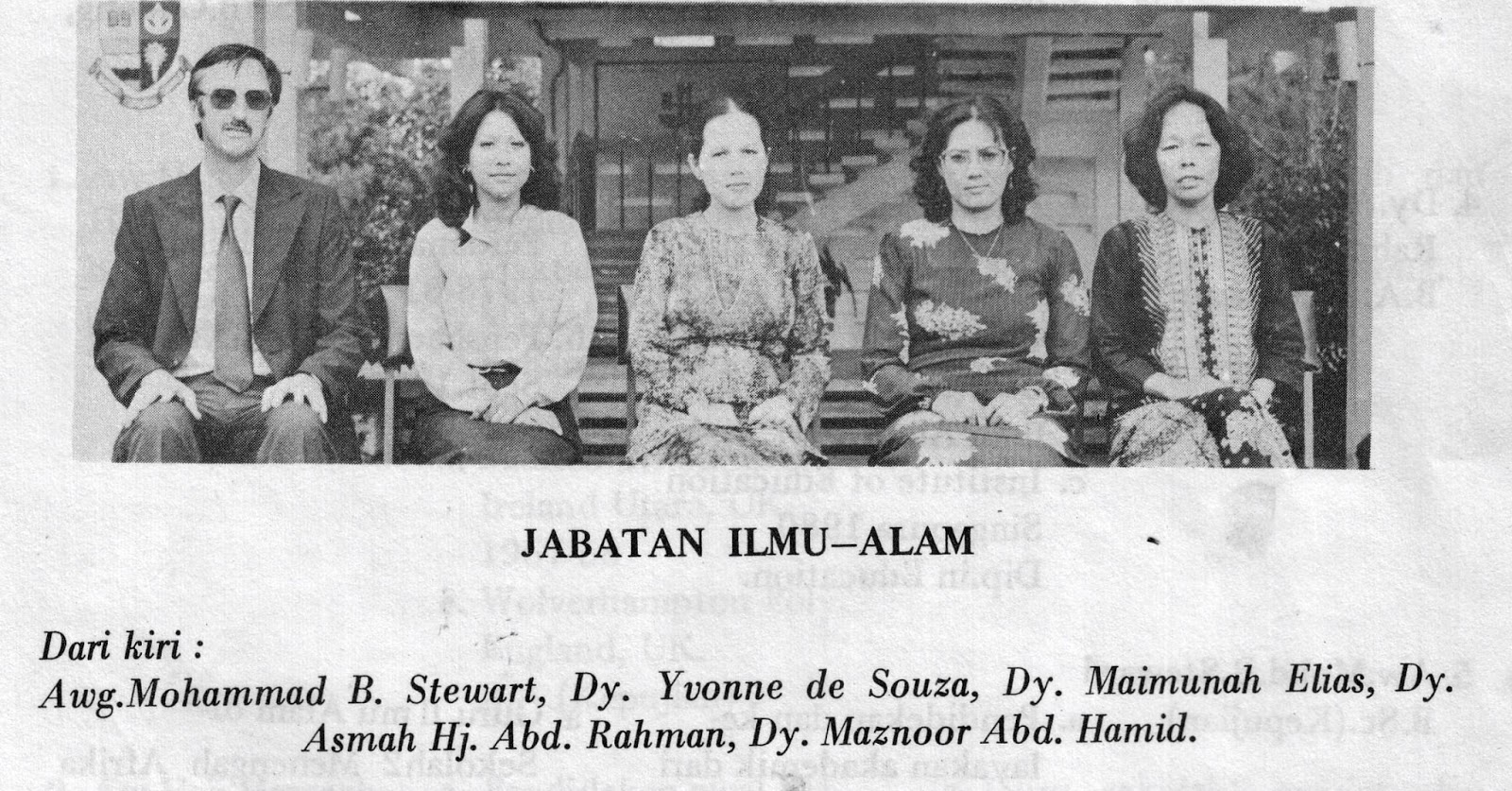 We were more than just colleagues, we were mates.

Eventually Yvonne and I left Brunei.  Munah and Asmah were both Bruneians - and have forged ahead in their careers and family life.  These two Brunei lasses are the finest of colleagues and friends I could ask for.  Unlike some female academics I have come across in Singapore and Malaysia, they are very warm and unassuming , no airs and no pretensions despite their family and educational backgrounds.  And they had been studying in England since their A levels!!

Yvonne and I spent much more time together wandering in places like our student Sameon's padi field to take photographs and learn about dry padi farming in Tutong.

By the early and mid-1980s we all went our separate ways.  Munah was transferred to the Ministry of Foreign Affairs,  Asmah was embarking on her Masters at London University with two little toddlers in tow.  Yvonne was beginning a new career  as a Librarian at a College in Vancouver and I went on to do my Masters at Leicester University and then settled down to life as an academic's wife.  How I relished that 'early retirement' - the great escape :

But I faltered in my decision and went on to teach at USM Penang from 1991-1993.  The students made those two years worthwhile but the administration and the system made me realise it was a mistake.  Teaching and teachers are just the same, wherever they are -  petty, unprofessional and even squalid in some parts.  I returned to Leicester and decided I must look up dear Yvonne.

So in 1993 - 12 years after we said goodbye in Brunei - I went to Vancouver to renew old ties.  We spent hours regaling our mischief  and all the shenanigans we got up to when we were in Brunei.  And when we said goodbye at the Airport we hugged each other and said we must not wait too long for our next reunion.

Dear Yvonne had been to hell and back where her health was concerned.  I had my ups and downs but nowhere as traumatic as hers.

And so after her visit to Sydney to see her mum and family, Yvonne stopped over in KL .  With Julian's kind help, he accompanied her to our doorstep on the evening of  Thursday 20 June.  It seemed like we had never parted - though time has ravaged us somewhat  ( but less so with Yvonne) ......

......  and we looked through the old photographs and College magazine - and we were back laughing and giggling at our wayward ways of the past.  This must be my bestest treat since the new millenium.

We said good-bye way after midnight , pretty late for folks who are over the hill in their 60s, and once again reiterated we must not wait too long for our next chinwag - perhaps in Vancouver, maybe in Leicester and who knows it might be in KL again.  InsyaAllah.

This has been the story of a loving, lasting friendship between two mavericks - this Eurasian from Kuala Lumpur and the Malay from Singapore.  And thank you Brunei for putting us - and Munah and Asmah - together.

Such friends are hard to find.

Very nice indeed. I have one or two such friends (partner in crime) since my kindies days & working years still intact.....

You have a better span of friendship than I have.

Partners in crime ? You must have been a right rascal - like Yvonne and I.

Yup! the rascal u are refering to is me thy neighbour. I dont know how the hell my comment went to Anon.....getting spooookkkyyyy!!!

I guessed it was you. The key words were 'kindies' and 'crime'.

Hope that after this your brains are still 'intact'.

Nice but cant help noticing Munah looks more Eurasian than Yvonne. In the West, Yvonne would still be classified as Asian, as far as looks go :)

You have posed a very fascinating question. Thank you.

It has mainly become a matter of perception hasn't it? The lighter skin is more Eurasian than the darker one.

It's like this. If you're a light-skinned Malay you can be taken as a Chinese.

But as for Munah, she's a Muslim - speaks Malay and Brunei Malay, like the rest of her family. We just don't notice her looks.

That's how Malays are defined.

Good reading.Stories about great bondship always makes me melancholy.
I love your pictures - pictures of old somehow are so different.Perhaps these days of camera phone dilute photographing a little bit.
And JJ Cale ... What can I say.Not many people knows about him..and to think he is Eric Clapton's mentor.
Curious about your wall ... Is it a dug-out bookshelf or an opening with a room beyond.Can we have more pics of your house? I keep a picture collection of writers room.I find it therapeutic.

Yes, those old photographs have a character of their own just like those sepia photographs from over a hundred years ago.

As for the background, it's just an opening for a room full of books, books and books. Technically it is a kitchen hatch because that room was supposed to be the kitchen!

As for pictures of our house? No, it's just a big nest of junk, what my mak would describe as 'karung guni'!

Anyway... i was born in Singapore too , my mum is Singaporean ... and that made me a Singapore Malay. My dad is from Muar, Johor.. But I still am, a Singapore Malay.
My early education was in Singapore, from Kindergarten - at balai rakyat - then two years in Ngee Ann primary school - at that time we had to use the Bedok Primary School -
When i was 8 , we went to Brunei, my father got a job in the Royal Brunei Armed Forces, so i went to St. Andrew's school then continued my A levels at Maktab Duli... then went to UPM... and now in KL....
Looks like we have something in common....
I pray that you will always be in good health and happiness always :)

Welcome to a fellow nomad, albeit a younger version. You must have a lot on interesting tales to tell.

Thank you for your kind wishes and InsyaAllah I shall blog on and on and ......

I stumbled upon your blog while researching for my academic works on Teachers Training in Brunei Darussalam. It is amazing to spot my father and my great-grandfather in the photo showing the dry paddy field in Tutong =)

Firstly my apologies for this belated reply as I have not been too well lately.

But what wonderful news to get a comment from Sameon's son. Thank you for turning up in my blog.

Please convey my salam to your dad. I have other photographs of your dad, your grandparents and auntie. If you want them, send me your e-mail (which I will not publicise on the Blog) and I shall send them to you, InsyaAllah.