I got so embroiled in writing my riposte I forgot to mention that the two wanderers are back home from home.

We've had our asam pedas ikan merah and sambal goreng tahu/tempeh from my sister.  We've had two dinners and more from our nearest (physically and metaphorically) neighbour Zarina.  We've been plagued by the little monsters especially when all of Ampang suffered a disruption of water supply over the weekend except for Setiawangsa !  And we had our petai!!

What more could one ask for ?

Our cats were happy to meet us.  Here's Comot reviving her old days with the spouse. 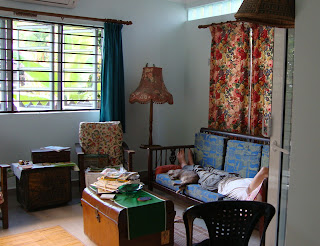 Socks is never around except for breakfast and dinner.  She spends all her time on the neighbour's roof - our cat on a hot tile roof!

Poor Rusty had to go to the vet today because of ringworms which he caught from another stray cat.
Here he is with a flowery attachment to make him look better. 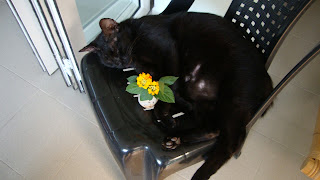 I'm so pleased with my tiny vase which travelled in my handbag.  I could pick my favourite bunga tahi ayam from the garden and have a teeny-weeny floral display in the house.

Here it is set against the banana tree that had increased its height by ten times since we were away. 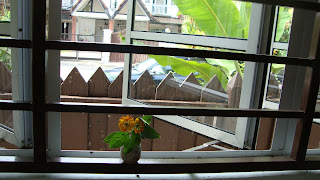 And closer still on top of the writing bureau.  The vase is just two inches high! 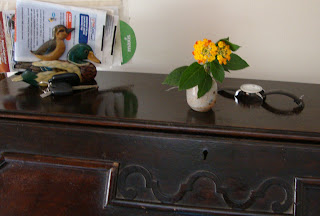 Even though it was night time we couldn't help but notice the political buntings and flags on the way home from the airport.   It looked even more colourful in the day ... unlike elections in England and Singapore this democratic exercise is lively, healthy - and crucial.  But I wonder what my dear Abah would say if he was alive now to see how the Malays have split themselves into three and are shooting themselves in the foot as a result!!

Alas, what happened to the Spirit of 1946!  He would say  "Melayu tak sedar diri - mudah lupa daratan.  Dengki khianat sesama bangsa".   He told me that about my bangsa in the 1950s, way before Merdeka 1957.  And Anak si Hamid  concurs - especially now, despite over half a century of Merdeka.

nice to read about your cosying away in the warmth (literally) of yr home from home. :)

[it's getting nice and warm in my neck of woods too, though word is spring is late by abt 2 weeks this year.]

love your pretty vase of lantanas!

hehehe! i cannot bring myself to call these lovely blooms their malay name. really beats me how the malays make that totally unwarranted connection, odourwise.

granted lantana florettes and leaves have a slightly pungent smell, but it's not unpleasant kan?

furthermore verbenas, the species that lantanas belong to, are considered aromatic flowers and i think are valued for their looks as well as scent. for medicinal properties too, i heard.

Yesterday was my first time reading your blog & I like it. Really like it. I spent most of my working hours, reading your writings!! Hehe..

Welcome back, my dearest ex teacher. And uncle Iain. Quite a welcome we've lined up for you, eh? Hope to get invited to your dining table soon, before i park myself in Johor for the election coverage.

Yes our spring was delayed too. It was the coldest March in 50 years.

I know it's such a shame to name these beautiful flowers BTA. I may be wrong but I reckon the fragrant flowers in Malaysia have been given nicer names like kenanga, melor, cempaka and bunga tanjung.

Yes indeed out BTA is good as an insecticide too. There is room for all in God's world.

Salam to you too Cik Kifi,

Am as pleased as Punch that you like the rantings of this geriatric Malay Maverick.

Hope you weren't caught by the boss while reading AsH?!!

InsyaAllah I shall keep on writing. Once again, thank you AND get back to work!

Menginding again? We'll sort something out before you head south.

Thank you, we're both in great shape.