I  knew there was something odd about us and it's such a relief to blame it on where we live.  Somewhat akin to Feng Shui, the English have their Ley lines - lines that are in harmony with one another and utilise a mysterious aspect of the Earth's energy.  So I searched for our alignment, according to our postcode, and lo and behold ....... 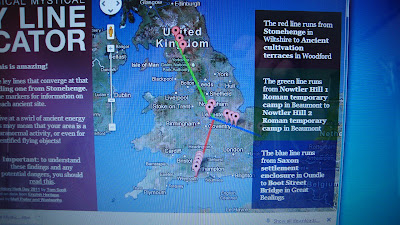 We are at the convergence of 3 Ley lines.  The red line connects Stonehenge to an ancient agricultural terrace; the green links two hills in a Roman camp in Beaumont and the blue joins a Saxon settlement to a bridge.  The upshot of this :  that we "live at a swirl of ancient energy  highways; this may mean that your area is a hot spot for paranormal activity or even for unidentified flying objects! "

That explains why we are what we are.  Phew! Thank goodness, it's not due to our defective personalities!

That explains my hoarding spirit that cannot resist accumulating 'junk'.   It also drives me loopy, giving me an urge every few years to pack boxes of all such paraphernalia off  to the motherland.


Speaking of which, these were then transported  (not by teleportation) on Wed 27th.  As the weather in March had been abnormally cold - minus two to minus three at night, and hovering between six to seven in the daytime - I experimented with this mad hatter's trick of donning a summer hat so that my worldly and otherworldly goods will arrive safely! 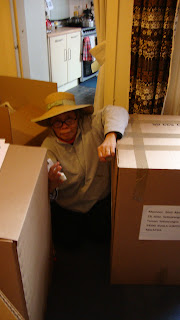 In one of those boxes I packed this magic book. 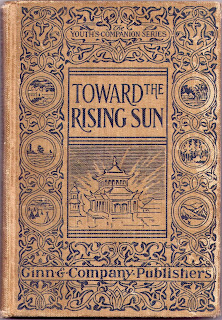 It was written in 1902 and published in that wildly self-righteous land of plenty which has the feature of the Freemasons pyramid and the all-seeing eye on the back of their one dollar bill - wow! - this is real hot stuff.
Here's a page taken from that book, about a " Malayan Child Life ".  Do note certain sloppy errors like the child's name should be Busu, for the youngest in the family.  "Busuk" means smelly!!  I suppose the wrong spelling for Muar can be overlooked as the 'durians'  had been correctly spelled. 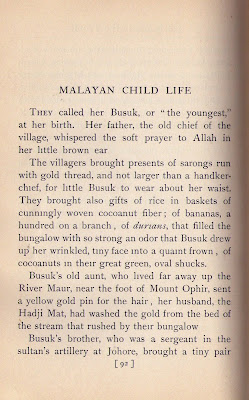 But today, there's not much care for children from the exotic parts of the world like Gaza or Vietnam.
This mighty nation - this USA - is happy to abet Israel in wrecking the lives of children from Palestine and Gaza.

The drawing below was done by a little boy from Gaza.  It shows Israeli soldiers 'foraging' in his house for bombs, weapons, grenades, and terrorists! 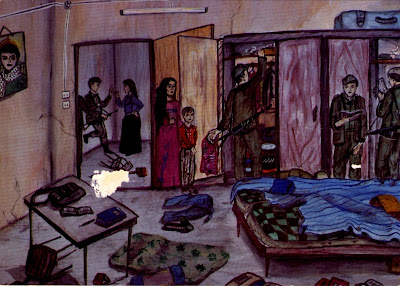 I must say that Palestine or rather, all of the Middle East, must have very distressing Feng Shui and Ley lines.

As for our abode and the possible presence of UFOs,  I reckon these two men of my life, the spouse and Jack, would fit the bill.  Here they are enjoying  two and a half hours of opera music on the laptop OR probably communicating with their brethren from outer space. 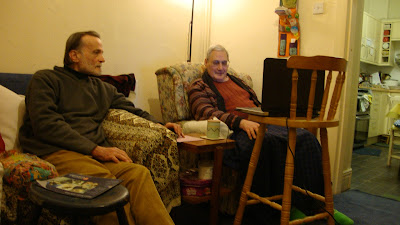 Then today, on a shopping expedition , we came across Matthew Fearon busking in Leicester City Centre.  He sang "My Song" which I recorded and as we left to catch the bus, the Beatles'  "Here comes the Sun" echoed in the square.  Matthew has such a strong and beautiful voice, like a stream meandering in a forest.

This is one pleasure you can find when you live where three Ley lines converge!

P.S.  2.  We have a wonderful freight forwarder based in Birmingham.  His name is Andrew Blakemore at andrew.blakemore4@virginmedia.com  We have used Arcadia Freight Services to transport our goods (door to door) in 2 half-containers a few years back, and a pallet size most recently.  He is very efficient, courteous and helpful and his cost is very reasonable.  It's not my practice to advertise any one,  but Andy is such a dependable gem and a good egg!

Pn AsH,
Salam. What a relief to have something to blame for our idiosyncrasies. So 'don't blame me' for acting so. Blame it on the 'forces'.
Read your enlightening much researched writing on the Palestine/Israel conflict. Could it be a possibility that you have something of the same on the Sulu Sabah claim?

loved the busking vid, he's blessed with sweet vocals :) thanks for sharing.

btw what was the context of the page from the book about? the one about busuk :)

Glad you found the writing on The Conflict useful.

As for the Sulu Sabah claim - InsyaAllah. But remember, my Ley lines might not be too encouraging ha ha !

So glad to see you here. Do you think Ken could sing 'My Song'on our STW sidewalk?

And most of all Happy Anniversary to the much younger Darby and Joan from Setiawangsa!!

Salam. Matthew Fearon does have a lovely voice, doesn't he?

That page about 'Busuk' was taken from the 1902 book "Toward the Rising Sun".

When I have the time, I'll try to scan the chapter.

Oh, so that's why u stayed at Boon 'Ley' before and now in Malaysia Bo'Ley'!

Thank you. And now semua boleh except getting our travel dates correct ha ha!

Better say this before you get a chance.

You should have listened to him singing "Here comes the sun".