Wicked Witch from the West (of Suez)

Been back for just a week and am now feeling a bit normal.  I do feel like a composite of the three wicked witches in Macbeth because since we've arrived in Malaysia we've brought in "thunder, lightning and ... rain".

On Thursday evening  the storm brought down the modem and the wireless - leaving us bereft of our toys.  With Faiz's  (our nephew-in-law) help, we managed to get it going last night.  But this afternoon it played up again and with guidance from streamyx staff I found out that the splitter had given up the ghost. HELP!!


Our return was marked by other interesting incidents.  Firstly one of the bedroom doors refused to open.  But Faiz set it right by doing exactly what the spouse had been doing - but I supposed he had a special twist of the wrist, being young and sturdy!  Then the toaster caught fire. The kettle refused to boil  due to damaged wiring.  What else?? 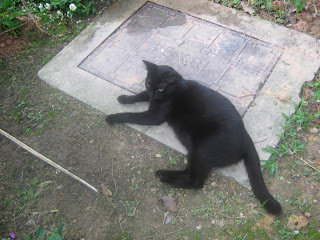 was going about looking uptight and depressed.  He would not touch his food and was not as playful as he used to be.  Took him to the vet for two days running.  It was raining cats and dogs (ha ha) on the second visit.  His problem?  He had a problem with his KYBO - army parley for Keep Your Bowels Open!!

And now for the good news.  When we arrived on Friday the 13th at 8 pm,  we found ikan asam pedas  and sambal goreng tahu and tempeh in the fridge.  My sister was responsible for that.  Maria had cooked the rice. She also stocked us up with tea, coffee, milo, margarine, bread, eggs, tomatoes and salad!!

But there was more to come.

We found our bedroom cleared of 4 months' cobwebs and dust  - by courtesy of Hidayah.  We were bestowed with more meals on wheels from my sister for the rest of the week - yummies like masak lemak labu, mee siam, laksa, tahu masak taucheo, date cake, sambal ikan bilis & petai and pau daging. 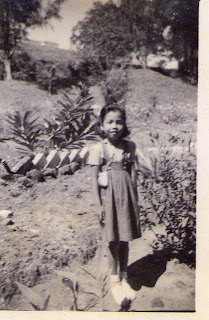 How was I to know that this little girl would grow up to be the world's best sister and cook?  And how did I get to be the most thick-skinned moocher?

What a welcome home from the rest like Mus and Hannah, my sister's 7 KL grandchildren and today, the man from JB  (8 March 2011 posting).

Thank you all.  It's good to be home.

Soon I shall put the cliffhanger to rest and carry on with my role as the wicked witch of the east.
Posted by anak si-hamid at Saturday, May 21, 2011

welcome home, welcome home.. you have been missed! i'm going to cook nasi minyak & ayam kuzi for you soon.. insyaallah..

Yabadabadoo - more yummies for the tummy. Bless you dear girl.

Hope you both are in good nick.

Be prepared for another pair of trouble coming soon !!!

Alhamdullilah for having a loving family who thought of everything before your return!
Kama At-Tarawis, will you teach me how to cook ayam kuzi when I am there in July? Sounds yummilious :)
Need to learn some new dishes to cook in OZ Land
See you soon.....insyallah

Pray tell me, who are these two?

Also when, then we can both have a stomach headache and you have to return to Singa Land.

Good to hear from the grandma. How about teaching us an Ocker tucker dish?

Some unhappy events (leaving you bereft of your toys) but many happy occasions for the tummy.
Hopefully your stay will be a very happy one.. :))

It will be a happy stay - all the signs are there.

Good to be back in the same woods as you.

Let's see now....meat pies, sausage rolls, I can do that!
Frankly, I am not into witchity
grubs, hehehe!