Putting a Word in.

Words have always fascinated me - from the jaunty tum-tiddy-tum rhythm of .....


Jack be nimble.
Jack be quick.
Jack jump over
The candlestick.

....... to word meaning and interpretation.
Many, many years ago I dabbled in a little exercise of  comparing how words are selected to reflect the writer's or in this case the English newspapers' attitudes and interpretations. 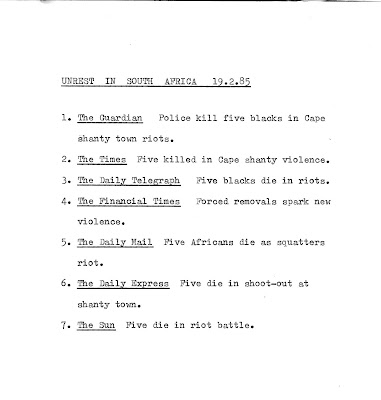 Several thoughts came to me.


Well, except for the Guardian, all the other papers are sympathetic to the  White Apartheid Regime of South Africa or at the very least quite ambivalent about the struggle of the non-whites against apartheid.

Firstly there was the case of the now former Director of the IMF,  Dominique Strauss-Kahn, arrested for the sexual assault of a chambermaid of West African origin in a posh New York hotel.

We all know how Islam and Muslims are condemned by feminists, Judaeo-Christian and secularist critics for an inherent misogynistic attitude towards women.

However one should also realise that the English Language is no better as a  purveyor of classic Misogyny!  The comments in the various reports on DSK found great difficulty in attaching definitive words to describe this wealthy upper-class Jewish Frenchman's sexual proclivities.

There is no shortage of words to describe the 'loose' woman.  She will be labelled as a slut, prostitute, slag, harridan, cow, harlot, whore, tart, trollop, wench, nymphomaniac, hussy, strumpet etc. - words that are clearly condemning and hostile.

What words in English can you use for a man of 'easy virtue'?  There's rake, lady-killer, wolf, gigolo, roue, Don Juan, womaniser, playboy, Casanova - words that are not quite as judgemental as those reserved for women.  It's almost indulgent, like 'boys will be boys' - aaahh!!  The one strong word I can think of is 'lecher'.  When I was in University we girls describe such men as 'smellers'.

As for DSK, despite a record of a 'lack of sexual restraint' against women, French culture and the Gallic way of life tend to ignore and hide such 'ungentlemanly' behaviour.  He is regarded as a  'libertine', a very hurrah-word, a term allied to 'liberty' and freedom of expression and action.  No wonder the French are so offended by the hijab and the burqa.

Secondly, take this report of the tragic event of the landslide at Hulu Langat which killed 16 children and youngsters.
Read mhtml:file://C:\Users\user\Documents\Malaysian village mourns orphans 9use of words.mht
This is an article in the asiaone news, a Singapore Press Holdings Portal.  It was extracted from the AFP or Agence French Presse.  Here's a quote from  one sentence.

Koranic verses blaring from an orphanage loudspeaker was a daily wake-up ritual for residents......

The word 'blaring' means 'to make a very loud, unpleasant noise'.  My Secondary Four students in the non-pukka Jurong Secondary School in Singapore would not use that word in this context.  It's an unsuitable choice of verb.  To a lay person like me this  word  reflects the writer's attitude towards 'Koranic verses' and indirectly to the victims of the  landslide.  What's his/her perception?  You don't need a Ph.D to tell.  And the AFP is no two-bit hick town agency!

I would prefer the word 'echo' or 'resonates'.   I suppose it is easier for the writer to choose an apt word if it was about church or temple bells and furthermore these do not require loudspeakers!! 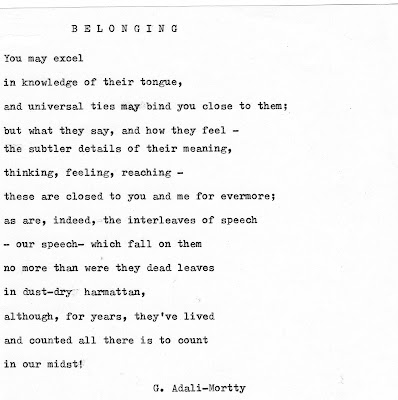 But most cutting and damning was when TV3  on their 11pm news on Sunday  described the children at the
Rumah Anak-anak Yatim dan Anak-anak Hidayah Madrasah Al-Taqwa  as "inmates" !!!

To the neanderthal at TV3 who chose that word ,  an "inmate" is  'someone who is being kept in a prison'.

This gross mistake has nothing to do with the problem of lacking  "the subtler details of .... meaning, thinking, feeling, reaching ...".   It's sheer ignorance and laziness. So there!!

Totally agree wth you on the choice of the word 'blaring' ! I didn't read the article, but was just wondering just what has this newspaper statement got to do with the tragedy ?????

Ha..ha..
I noticed the word "inmate" was also used in Malaysiaboleh's free paper "the Sun" to describe the children at the Rumah Anak-anak Yatim dan Anak-anak Hidayah Madrasah Al-Taqwa..