Eight hours into our flight to London Heathrow,  I  woke up with a start and realised to my horror  that I had forgotten to pack my old passport that had my SWS  (Settled with Spouse) British Visa which  ensured my indeterminate stay in UK.

I broke into a cold sweat worrying about the prospect of being grilled and put on another plane back to Kuala Lumpur.  Shall I wake up the spouse and unburden my fears?   I nudged him awake and told him the dire news.  He muttered  "Don't worry.  We'll sort it out when we get to Immigration" and went back to sleep.

But within half a minute, he sat straight up - now fully aware of  my predicament.  "What other documents have you got with you?", he asked.


There was my Debit Card and National Insurance Card. 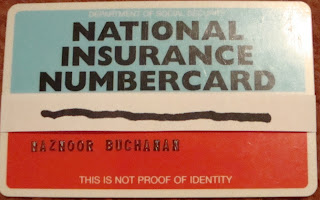 But my address was not on these cards and the NI Card is not a valid proof of identity.  My mugshot was not on it!

Then it dawned on me that if I went to Immigration hanging on to the spouse's coat-tail they will want proof of our marriage.  For all they know I could have paid Donald Iain Buchanan millions or billions of pesos or bahts or rupiahs to get a foothold into Britain!

I only cart along our marriage certificate  when we travel in Malaysia - you know, khalwat   and all that palaver.  That piece of paper is quite travel worn by now because it accompanied  us whenever and wherever we travelled  in Malaysia - ever since 4 April 1986.  We keep one copy in Britain and the other in Malaysia with my mother when she was still with us.  It's now safely ensconced in a little case under our bed in KL - just in case.


In my old Singapore Passport I was allowed an aka of Mrs Maznoor  Buchanan - for ease of travel in all the places we've  merayap-ed   in -  like Spain, Ireland,  India, Canada, New Zealand, Sri Lanka, Italy  and South Africa.  However no such consideration was allowed   in my Malaysian Passport.

Then the spouse dug into his wallet and discovered our NHS Cards which had our addresses in it.  Phew! What a relief. 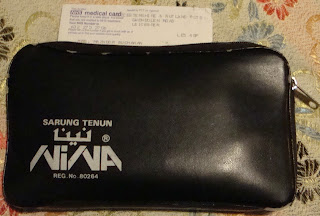 He asked how long I had been away and after getting my answer  he stamped my passport.  And that was that!

Good to be home (the other).

InsyaAllah we'll see you both gain - this time for lemon layer pudding??

Welcome home good people. May the sun shine on you, if only a little. But your hearts are brighter so what does it matter?

Who cares about the sunshine - grey and frosty will do for me.

So when can the four of us get together and 'bersembang panjang2' now that you're only just down the M1?

The M1 is 200 miles long, full of Eddie Stobart lorries and, I think, becomes a bit of a bolognese near the spaghetti junction in Birminghamistan (or what Malaysians here call Birm). But there's a nice whiff there of chicken tikka.