Today is the last day of 2010 in the Gregorian calendar. Almost everyone will be looking forward to 2011 and making resolutions for the coming year
.
Strangely enough I've been going backwards because I have been rummaging and tidying my collection of Malay 78s before we make another sortie to Leicester on the 10th of January. In this life, few of us have the 'privilege' of having to sing three national anthems. I warbled my way through 'God Save the King' followed by ' God Save the Queen' in 1953. Came 1961 we sang 'Negara Ku' and when Singapore was separated from Malaysia I learned to revere 'Majulah Singapura'.

Most national anthems sound very triumphal and pompous. Some have been specially composed for the occasion via special selection or by competition. For me 'Negara Ku' is the sweetest  and it's not just because I'm Malaysian. There was nothing pretentious or showy about this anthem. It did not flaunt the might of the people and the nation. After all it was once a beautiful love song called 'Terang Bulan' and tonight I would like to show off select bits from my collection of Malay 78s.

Please click on the arrow to play the video. 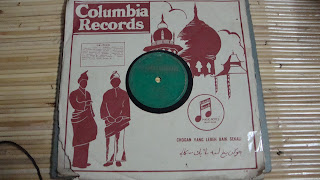 
The next version of Terang Bulan was danced to in perhaps many dance halls in Britain through the 1930s to the 1950s.

You will notice a moving finger in the video.  It belongs to the spouse,  the  Musical  Director's assistant.   The record is chipped and so the earlier part  is missing.  But it's still much loved and treasured.﻿ 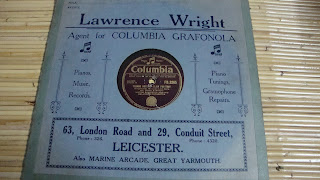 There are many other versions of Terang Bulan  but these two are the best (to me) AND  I have them in my keep (showing off again).

Actually they were collected by the spouse -  a larger magpie than me -  and I have sequestrated them as mine,  yeah!!!!﻿

This posting was supposed to make its debut on 1st  January  2011 to wish  all of AsH's readers a peaceful and happy New  Year.

But the video posting got snagged and no amount of effort on my part could put it right until  Lely got on the scene and showed  Miss Hamid how!!!!   I always knew she had brains between her ears!!
Posted by anak si-hamid at Sunday, January 02, 2011

The first clip, the original version of Terang Bulan at approximately 1:16 into the song, you can hear a guy 'rapping'!
I'd be glad if someone can tell me what he's saying.
And can we now claim that rap started in Malaya decades ago?

First....congratulations on a fine piece of video and audio recording. You did it !! at least there is a recording copy of these beautiful songs.

Third....its so strange to hear her referring her lover as 'tuan' and herself as 'saya' . Trying to imagine what a present day song would sound like with such pronouns...

You're a staid middle-aged doctor - just where did you learn about 'rap'? Have you got a secret life somewhere?

Also this might be a Malayan song but the singer and orchestra are from Java. We don not want to start another war with Majapahit, do we?

I think Victor Tobing was 'rapping' this.

I think that's what I heard. After all, this record is over 73 years old.

You posed so many interesting questions. It got me thinking too.

Can you imagine a line that reads, "Ingatkan anda yang jauh di mata?"

Gems you have here, Ms Hamid!

Btw, happy first Tuesday of the New Year to you and the spouse, and here's to the sweetest national anthem of them all!

Thank you Din for your special greeting.

And yes they are precious gems.

Take care and be good.

Our Negaraku is a much maligned but a much loved song. Soekarno (who couldn't spell and kept changing the spelling of his name. And then added Ahmad to it when people kept asking if he had another) mocked it by singing Terang Bulan during Konfrontasi, but thank God we had Tunku Abdul Rahman as PM then, a man who kept his sense of humour by the drumload. And there are others around still - some old enough to know better, some young enough as to be punks - who are so chauvinistic and anti-anything Malaysian that they forget that it is only a song, for chrissake!

Well, Negaraku, I shall always sing it with gusto and not a little melancholy weighing on the mind. It has a long past, a troubled mid-life and, dare I say, a glorious presence. Try listening to Negaraku when you are standing in foreign climes, and the wind is blowing a little and the sun is shining, and you're pining desperately for mee rebus (rebus sic stantibus as they say, but that's another thing). It beats watching a soppy Bollywood film. To many it is the dost-dost-na-raha moment in Sangam. Boo-hoo-weep-sniff!

It started in the Seychelles, they say. When Abdullah and his band of men were exiled there they absorbed not only the sounds of the sea in the conch, but also everything in the surrounds. Fast forward to a royal visit to Britain by the Sultan of Perak (early 20th century it must have been) and his hanger on was asked if the Sultan had a state anthem to be played on his arrival. "No," said the man. "But hang on, I know this tune from the Seychelles." So he whistled one, and it was the first, slightly-out-of-tune rendition of Negaraku. So the Brits, overstuffed with their Yorkshire puds and hung-over from their bout of Somerset cider drinking, said to them, "What ho, this'll do for a song." And it became the Perak state anthem. And the rest, as they say, is Name That Tune.

Negaraku, on the best of evidence, was a French folk tune. It must've been sung by the Seychellois on their return from the sea, and it was sung by Perakians longing for that their second home. Detractors, and they are legion, say "Boo hoo, you call that a national song?" And let's all, with gusto, say "Yes!" Negaraku, with its history, is a page from our past. It speaks of longing, exile, return, everything is within.

But what about this purloining form the French and all that? So what, let's all say. Egypt's got Wagner for their national song, and it doesn't make them less Egyptian; and God Save the Queen is said to have been plagiarised by Handel from a French tune and so on ad infinitum. Let's settle this once and for all then: It's the singer, not the song.

POSTSCRIPT: And did Soekarno have another name? No. Ahmad was one that he made up on the spur of the moment.

And another: I once narrated this story to a Perakian named Raja Badiozzaman who was then customs attache at the Malaysian High Commission in London. After listening to my story politely for about five minutes, he cleared his throat and said, "Yes, and the man who whistled that tune was my grandad."

Thank you very much AG.

As usual you're a fount of information and I'm certain those who read this blog learn a lot from you.

I know the feeling of being far away from the shores of home. Even the sight of a swaying coconut tree on a documentary about Malaysia on British TV made me homesick.


And yet after nine months here, I yearn for the bare trees of winter and coming home to a warm fire and a hot cup of tea after a walk at Victoria Park.

Yes, our anthem is soothing and loving. Wish our society had turned out the same.

Terang Bulan, the origin of the anthem of Perak & next is Negaraku. Nowadays younger people have forgotten about this kind of song.

It's so good to know that a young man like you recognises the connection between Terang Bulan, Perak's Anthem and Negara Ku.