I Vow to Thee My Country - Rajinder Singh and Deva Kumarasiri

About a year ago Deva Kumarasiri, an immigrant postmaster of Sri Lankan origin at Carlton, Nottingham, hit the news when he refused to serve Asian customers who can't speak English. He had been in Britain for 18 years and he was quoted as saying "When I left Sri Lanka I left the culture, customs and language and have done my utmost to be part of this country's culture......He peppers his conversation with the local terms 'duck' and 'dear' .....flies the Union Jack in his garden and on his Land Rover. His wife is a nurse and his daughters....want to join the RAF". How fortunate Britain is to have him as an immigrant. Some countries in SE Asia are not that lucky.

I just wondered if he dared to give the same (mis)treatment to the immigrants from Eastern Europe who can barely speak English?

In November 2009 it was reported that an ex-teacher, a Mr Rajinder Singh 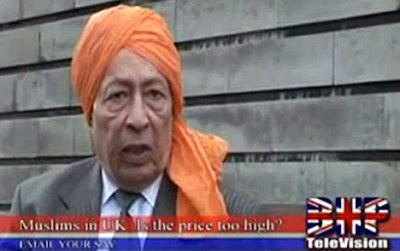 will be able to sign up as a true blue member of the racist, right-wing British National Party (BNP). What links this Mr Singh with these white extremists? They both hate Muslims and Islam.

For more details Check Out this

Some years ago in Leicester, the spouse was sitting in the bus and saw in passing a poster at an Indian Sweetshop which read "Islam rapes your mothers". Based on that claim there must be untold numbers of uncircumcised males scattered all over the globe whose Muslim fathers raped their non-Muslim mothers. Generally females are unwanted and discarded.

So, what aspects of British cuture do you have to cultivate to be regarded as British?

Check this this It's quite laughable.

Based on that rebuttal by Mark Pack, a stalwart of the Liberal Democratic Party (one of Britain's major political parties) I could be British too except I hate Easter chocolates. I'm not a member of the Church of England. I find cricket boring and football and rugby are too full of sweaty men in shorts running after a ball. My father was a 'loyal' worker in the British Army and he too was given his 'thank you' certificates. I quite like the Ealing comedies and I never get tired of watching re-runs of Monty Python, Blackadder and Fools and Horses.

However people like Mr Rajinder Singh and the BNP adherents will not have the likes of me even if I have English fish and chips coming out of my ears. Even the nasty Daleks (of the Dr Who series) want to exterminate me. 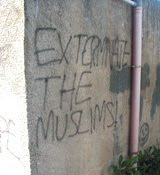 But hang on! I have no wish to be British. I'm just happy to be a Malaysian spouse of a British national.

However, such are the desires of Muslims to be accepted and acceptable in Britain. 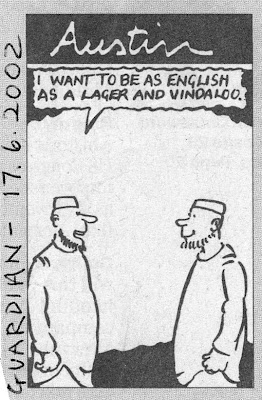 Maybe Muslims in Britain should take up Morris Dancing and learn to exclaim "b......r off" at the appropriate moments.
Posted by anak si-hamid at Monday, April 12, 2010

That man with the saffron turban, isn't he Spike Milligan? He's probably the guy who wrote to the great white Queen during the war asking to serve the country "in a clerical capacity".

AG,
Thank you.
Now you will really upset Spike M. who probably prefers to be a hobbit.
Clerical? Is that as in writing or preaching? Probably both. Hallelujah!!!

Reading about deva kumarasiri reminds me of the story, in all probability apocryphal, of the m'sian and the british indian immigration officer at heathrow.
So there was our immig officer all bristling with self-importance (you know the sort, the ones who give their own kind the hardest time).
Immig officer: And so how long do you plan to stay in the UK?
Msian: Not as long as you!

I love this story. That's why you will always find me smiling at the passport line even after a long flight.

Thank you Ribut,
I love your story. Do you notice how the non-Caucasian Immigration Officers at Heathrow are more bolshie and arrogant than the British Bumiputeras?

Tu lah, depa tu lagi aksyen, kan?
Klu depa tu aksyen sangat, i snub them with "I've got a country to go home to". Now, did I see a glint of amusement in the British Bumiputera's eyes?

Thanks for allowing me to let off steam here. I've always enjoyed your blog.
Ribut