A Plea for Recognition 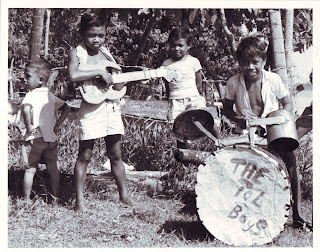 During his sojourn in Malaysia and Singapore in the 1960s, the spouse took loads of black & white photographs. He wandered uphill and downhill, in rainforests and concrete jungles, in urban centres and rural seaside, took pictures of all sorts of people and places. Today he gave me one of them to use for this blog. I've been nagging him for some time for this lovable photograph - a picture of creative imagination, innocence and fun on the part of these little boys.
This photo was taken in a kampung off Changi Road in Singapore sometime in 1968. That drumset and guitar says a lot about the nature and mindset of children in those days before TV took over the imagination, before rampant materialism consumed their lives and home is where they are surrounded by trees and bushes, and sticks and stones are easily gotten for making sophisticated toys and where they know the grammatical difference between Boys and Boy's!!
I know I am guilty of romanticizing the past but why not? There's a lot in the past to be proud of including a drum set made of old tin cans. I do salute you marvellous members of The Tol Boys Band.

My one wish. If there are people out there who recognize themselves or these boys in the picture, please come forward.


I know you can't stand Jefrydin, Mus. But if you care for future mugs of Iain's teh tarik, you had better hide your opinion.
Long Live Pop Yeah Yeah!
Posted by anak si-hamid at Tuesday, September 22, 2009

Ms Hamid, there's mothing wrong with romanticizing the past. I do it all the time. At our age we have a lot of past to romantocize about.

Could it be Rocky with the drums? Just a wild guess.

With is girls, we were the anneke gronlos and salomas, complete with backcombed hairdos and lengan patah while belting their songs.

Kak Teh, I hope your sayangs are not reading this confession of yours.
Can't be Rocky because he was living on the other side of the island. But where that boy is concerned, who knows?

I'll stick to my regular mug of Iain's teh tarik !

However... the photo is cute though...just the photo mind you...

AsH & Kak Teh, with Jeffridin, Aneke Gronloh, Saloma, kugiran (kumpulan gitar rancak), kebaya ketat coupled with batik wiron, beehive & heavily backcombed hairdos... how not to love you both? Ash, I spend half my time romanticizing the past.. I think it's a good way to while away one's time..

Thank you Kama,
Shall we have a new club? Romantic Incorrigible Women? or Incorrigibly Romantic Women? or just Plain Daft Women!!!

AsH,
I too like to romaticize the past - why not, when those days are full of laughter and not a care in the world except to study and get to MU or Singapore U.Once in the Uni it was endless weekend dances/balls, crushes,dreamboats, hunky ruggger players plus of course the tears and heartbreaks.It was such fun.
Yes, Jefridin, A Ramli,(I use to have such a crush on M Ramli,a Singaporean, remember him?)et al Anneke was the ultimate!

selamat hari raya to you and iain!

Yeah. '68. It was a very good year.
In Form 6 and on the brink of adulthood. Someone described Sixth Form as the best years of ones life -- full of dreams and can do-ism and not yet tainted by the harsh realities of life.

As to the boys, just hope they weren't the ones who saw something the rest of us didn't and grew up to be THE toll boys, our ubiquitous corporate and political hoods greedfully helping themselves to every penny Malaysian motorists have to cough up any which way they turn.