The Long and Winding Road (CsH) 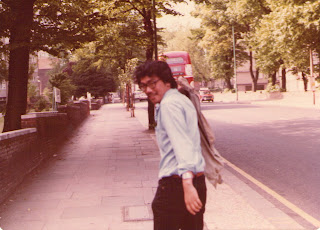 Since 1982, after Akim passed away, I could not bring myself to come home for Hari Raya. On Hari Raya eve - Akim, Mother and I would be getting the flat ready for when Nah and Mus and their families would turn up to celebrate Hari Raya - with our Mother. Putting up the curtains and changing the cushion covers were Akim's job and he did it pretty well - despite some harassment from our two cats Suzie and Kookie who refuse to budge from their cushion seats.

On the second day of Hari Raya this year - you left us 27 years ago without saying goodbye. Your departure "sudah ditakdirkan", but it's still unbearable.
So I came back for Hari Raya in 2007 but I could not do it for 2008. I'm here now in 2009 and the near coincidence of the anniversary of our loss and Hari Raya is an agony. It's not that I love my remaining family and their children and grandchildren less - but your sudden departure is like a task incomplete, like an unfinished symphony

Alfatihah. Your words hang heavy with sadness, Miss Hamid. I remember Akim for good moments, happy ones. Hippy, even. His taste in music was definitely ahead of his time (and I think I still owed him a few dollars for some of the LPs he pushed my way back then).

The last time Ben was here in KL, we spoke of Akim as if he was still there in Singapore, spinning the LPs back in Boon Lay, nary a care in the world.

The loss of loved ones diminishes us. May he rest in peace. Alfaithah.

Selamat Hari Raya to you and the Scotsman.

Din, Kama, Naz and Awang Goneng,
May Allah bless you for your kind thoughts. Thank you.