The Bad, The Good and the Ugly

I find the squealing from the Simon Wiesenthal Center, a Jewish rights group, denouncing Pat Oliphant's cartoon as "anti-Semitic, comparing it to Nazi imagery of the 1930s" quite amusing. According to the Zionists this is BAD


Compared to the demonisation of Islam and the Prophet, Pat Oliphant's jibe is to be expected when you consider Israel's (a country armed to the teeth by the United States) aggression in December 2008 towards the tiny strip of Gaza - killing more than 1,400 Palestinians which includes 900 civilians.

A writer from the London Guardian ( quoted in The Opinionater Blog in the NY Times 22.2.2006) supported the sentencing of David Irving for being a Holocaust-denier and he added " it's not ....hypocritical to simultaneously defend anti- Islam cartoons and European laws and against Holocaust denial". He further added " that the Holocaust laws were intended to prevent the legitimation of mass murder".

How do you designate the killing in Gaza? Is the murder and slaughter of innocent women, children and men justified for as long as the numbers killed do not approximate those who died in Hitler's concentration camps? How many have to die before it can be called "mass murder"?

Or does it depend on the ways you are put to death? For instance, a death sentence is still a death sentence whether it's by hanging or by the electric chair or by lethal injection or by chopping off the head with a sword. Does not the slow strangulation of the Gazans by sanctions, deprivations, economic blockades and daily harassment - what Mark Twain refers to as a Terror "wrought in heartless cold blood", with "death from hunger, cold insult, cruelty and heartbreak" count as modes of deliberate mass murder?

And heaven forbid !! Was the brutal war inflicted on the Gazans legitimate?

We've been told about the BAD. So what is GOOD? Perhaps this? 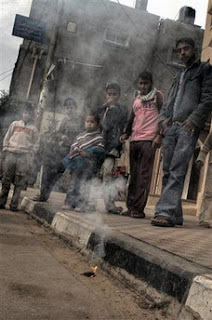 This photo shows Palestinian kids looking at a substance identified by Human Rights Watch as a wedge of burning white phosphorus . Phosphorus is classified as a chemical weapon which burns up to 816 degrees Celcius and causes horrific burns and severe injuries when in contact with human skin.


Next, here is an item which we must all agree is UGLY .

Fri, 30 Jan 2009 16:41:58 GMT
Israeli President Shimon Peres says the war on Gaza was not "an ugly story", insisting that the global condemnation of Tel Aviv is unjust.

"They try to make the Israeli policy an ugly story," a frustrated Peres was quoted by the Associated Press at a session of the World Economic Forum on Thursday night.


Woe unto you, scribes, and Pharisees, hypocrites! for ye pay tithe of mint and anise and cummin, and have omitted the weightier matters of the law, judgment, mercy, and faith: these ought ye to have done, and not to leave the other undone.

Ye blind guides, which strain at a gnat, and swallow a camel.

From the New Testament, St. Matthew, 23