I'm feeling a bit nostalgic tonight. We'll be off to Leicester, our other home in two days' time and such a journey always leaves me uneasy. Will things remain the same when we come back? This has been the longest stay in Malaysia and I long for the cool weather where I can walk and walk without feeling drained. And I can sit and sew and write in my room overlooking Evington Road and watch the buses and traffic and children and unfriendly East Europeans passing by. There used to be a couple of these female teenagers, dressed to the nines, but scantily clad even in October parading themselves to the young men on the streets. I wonder if they have grown out of it .

And so as usual I return to the comforting pictures of my happy childhood - to remind me of where I come from. 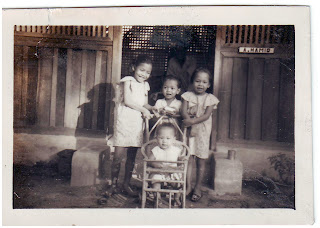 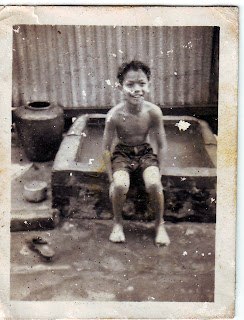 Mus sitting on the edge of the rain water butt (before the Plastic Age) which was built by our DIY Dad for collecting and storing rainwater. We had no piped water. So we paid a sister of Akim's friend Tu Kia to carry water from the kampung well to be stored in the tempayan or water jar as seen in the top left of the photo. (1952? 1953?) 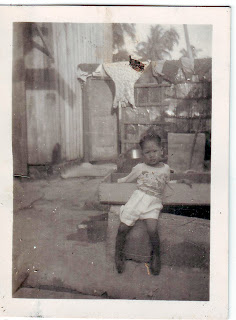 A year or two later, our Abah, the original Makeover Expert 'deconstructed' the water butt and made us a spanking new bathroom using flattened biscuit tins for walls . We enjoyed reading the writing on the walls so to speak, ha ha. He also made another concrete water container/tub in the bathroom which had to be cleaned ever so often because of the green slime. Of course we had to climb into the tub to do a good job and mak made sure we did so or else there'll be hell to pay. But Abah brilliantly made a hole at the base of the container for easy drainage and it was plugged by a piece of cloth wrapped around a tiny cylinder. Best of all, we had a bathroom door, a bit wonky but it served the purpose. We had privacy at last in the bathroom!! Our Dad was The King of Recycling before the word became fashionable. 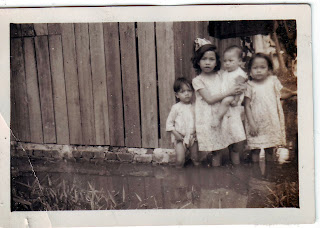 Knee high in water! For as long as we can remember we were always plagued by floods, sometimes several times a year. When heavy rain coincided with the high tide, the river behind our house would be choked and the excess water would flow into the house, sometimes in the middle of the night. Such a combination of heavy rain and tide would leave a layer of mud when the water receded and the penyapu lidi , a broom made from the stems of the fronds of the coconut leaf is the most effective tool for removing the mud. By the way we made our own penyapu which would leave striations on our index fingers and thumbs. We used a little sharp knife to do this and the process is called to raut or to smoothen. My sister and I DETESTED this job and when our skinflint mother decided to buy this broom from the local sundry shop, we both heaved a sigh of relief . During one of these floods my sewing project, a pair of pyjamas, was left soaked in mud and my teacher refused to accept my explanation. I had to sew another one and this time I enrolled my mum for help without any compunction because she did not believe my story. So there!


Good Night to all and to my Dear ones in Singapore and Malaysia and Insyallah I'll be 'seeing' you from Leicester. Ta raa me duck.
Posted by anak si-hamid at Sunday, April 19, 2009

i like the last picture, you all looked so adorable.

If only i have a father like your Abah..

Don't push your luck too far. I've got other photos of you - like when you were an itty bitty baby.

Your students would love it!!

And so would Pickled Herring. It will have her laughing all the way from Singapore to Sungai Buloh.

Mus,i had seen photo of you and late Akim dressed up in cowboy outfit taken at the Botanical Garden hahahaha.....

If Uncle agrees to adopt me, i will have to get blue-tinted contact lens. What do you think, boleh tak ??

you do that ! You might miss uncle and got syukri instead !
He has blue eyes too !!!