Prince Charles - a prince among (some) men.

On BBC1 News two or three nights ago there was an item on the launch of a report by a Catholic charity.    Accompanying the launch was a statement  by His Royal Highness Prince Charles Philip Arthur George, Prince of Wales, KG, KT, GCB, OM, AK, QSO, PC, ADC, Earl of Chester, Duke of Cornwall, Duke of Rothesay, Earl of Carrick, Baron of Renfrew, Lord of the Isles and Prince and Great Steward of Scotland.

In his video message HRH Prince Charles said,  " It is an indescribable tragedy that Christianity is now under such threat in the Middle East, an area where Christians have lived for 2000 years and across which Islam spread in 700 AD, with people of different faiths living together peaceably for centuries."

The report, by Aid to the Church in Need, claimed that "across the world, Christians remain the most persecuted religious minority, while Muslim countries predominate among states with the most serious violations of religious freedom."  (My emphasis in bold).

The report also said that "as Western Europe becomes more diverse, political and social tensions are rising between different faith and cultural groups".

John Pontifex, who compiled the religious freedom report, says "all faith communities need to work together to stand up for the right to worship in peace."

"We do not want to be alarmist but we do want to tell the truth in this report about the degrees to which minority groups - Yazidis, and indeed of course Christians, are being pushed out of their homelands."

"It is in effect a genocide.  What more evidence does one need to point to it being a genocide?"

On 18 December 2013, at a reception for Middle East Christians at Clarence House in London ...


......" I have for some time now been deeply troubled by the growing difficulties faced by Christian communities in various parts of the Middle East."

"It seems to me that we cannot ignore the fact that Christians in the Middle East are increasingly being deliberately targeted by fundamentalist Islamic militants."

Judge not, that ye be not judged.  For with what judgement ye
judge, ye shall be judged:  and with what measure ye mete, it shall be
measured to you again.  And why beholdest thou the mote in thy
brother's  eye, but considerest  not the beam that is in thine own eye?
Or how wilt thou say to thy brother, Let me pull out the mote out of
thine eye; and, behold, a beam is in thine own eye?  Thou hypocrite,
first cast out the beam out of thine own eye; and then shalt thou see
clearly to cast the mote out of thy brother's eye.
(The Bible. Matthew 7:1-5)


HRH Prince Charles will one day - on the demise of his mother Queen Elizabeth II - ascend the
British throne.  Fidei Defensor or 'Defender of the Faith' will be one of his assignations.  He will be the 'Defender of the Anglican Faith' (as of 1544) and this signifies the British monarch's position as the Supreme Governor of the Church of England, a position that is superior (formally) to the Archbishop of Canterbury.

Another inherited title is  Dieu et mon droit - meaning God and my right - referring to the divine right of the king/queen to govern.

This you can observe in the British Passport

and the British coin.

In 1994 HRH did declare that "I personally would rather see (my future role) as Defender of Faith, not the Faith."

If that is HRH's desire then maybe he should be a bit more circumspect about apportioning blame to Islam for causing agony to the Middle Eastern Christians - in the same way that Catholics and other Christian groupings are doing.    Such people are merely 'menanggok di air yang keroh' .... or making hay while the sun shines and striking while the iron' s hot.

Let us remember: allegations that Islam and Muslims are more violent, than any other faith and groupings on this planet must always be seen in a context - and a context Westerners usually forget:

1.  Countries with the Christian heritage have killed off tens of millions of people in the wars of the twentieth century, 16 million in World War I, 60 million in World War II.  Some have attributed more deaths during WW II to "Buddhists in Asia" - because Buddhists in the Zen orders supported Japanese militarism.  And today you have the Buddhist monks of Myanmar pushing for the ethnic cleansing of the Rohingyas.

2.  Then there were those killed in the Colonial (Christian) wars against non-Christian natives. In India we have the Battle of Plassey,  the Indian Mutiny and other colonial 'skirmishes".  Belgium - a strongly Catholic country, - in its conquest over the Congo killed off half of the Congolese - at least 8 million.

3.  Does Christianity  want to be reminded of the Holocaust of over 6 million Jews - that Christianity thrived on the belief that Jews were the killers of Jesus Christ.  Who pays for this 'indescribable' crime?  They are mainly the Muslims in Palestine and by default the  Christians of the Christian Holy Land.

4.  Most recently, Christian civilization has surpassed itself in inflicting civilian deaths on Muslim populations in Bosnia, Iraq (twice), Afghanistan  - using the "official" excuse of a "War on Terror". Their direct involvement in 'wars of liberation' in Libya and Egypt, their support for Muslim radical/extremist groups like al-Qaeda, Muslim Brotherhood and ISIS is well-documented.   Of course you will not find such facts in documents and videos publicised  by Christian charity groups like  'Aid to the Church in Need'.

5.  If Muslims are slaughtering each other today, do take into account the inter-Christian butchery that took place during the Christian Reformation and Counter-Reformation.  And Christian civilization seems to have little stomach to analyze and discuss the "indescribable tragedy" of  the African Slave Trade that claimed 10 million African lives or the number of Native Americans in North, Central and South America hunted and massacred during Christian Colonial Conquests.

The killing of Fusilier Lee Rigby in May 2012 sparked off blood-curdling cries against Islam in Britain.  David Cameron regarded it as an "an attack on the British way of life".  One sane voice dared to differ.   Seumas Milne of the Guardian had this to say: "When Rigby became a target by Muslim extremists, it  was a predicted consequence of an avalanche of violence unleashed by the US, Britain and others in eight direct military interventions in Arab and Muslim countries that have left hundreds of thousands dead,  Only the wilfully blind or ignorant can be shocked when there is blowback from that onslaught at home.  The surprise should be that there haven't been more such atrocities."


When it comes to selecting victims, it seems that some victims, - especially Christians and Israelis - are more equal than others.  The Judaeo-Christians shield themselves, through their media machine, from the atrocities committed by their culture on others especially in  Muslim countries.

Other than perusing videos presented to him by sources related to his Faith - HRH might try to catch some of these .......

Of course the minority Christians in the Middle East are victims of this terror war in their homeland but no more and no less than the majority who are Muslims.  To simply blame their plight on the Muslim extremists is mischievous - and perfidious.  For 2000 years these early Christians have lived in peace under Muslim rule.  Think: would they have survived the inter-Christianity wars in Europe in the Middle Ages, in the battle for supremacy between the Catholics and the Protestants? Think again - when did their world (and the Muslims too) began to fall apart.  Who made it difficult for Christians to make their pilgrimage to the Holy Land?

Perhaps HRH should also listen to other concerned voices like CAAT  (Campaign Against Arms Trade). 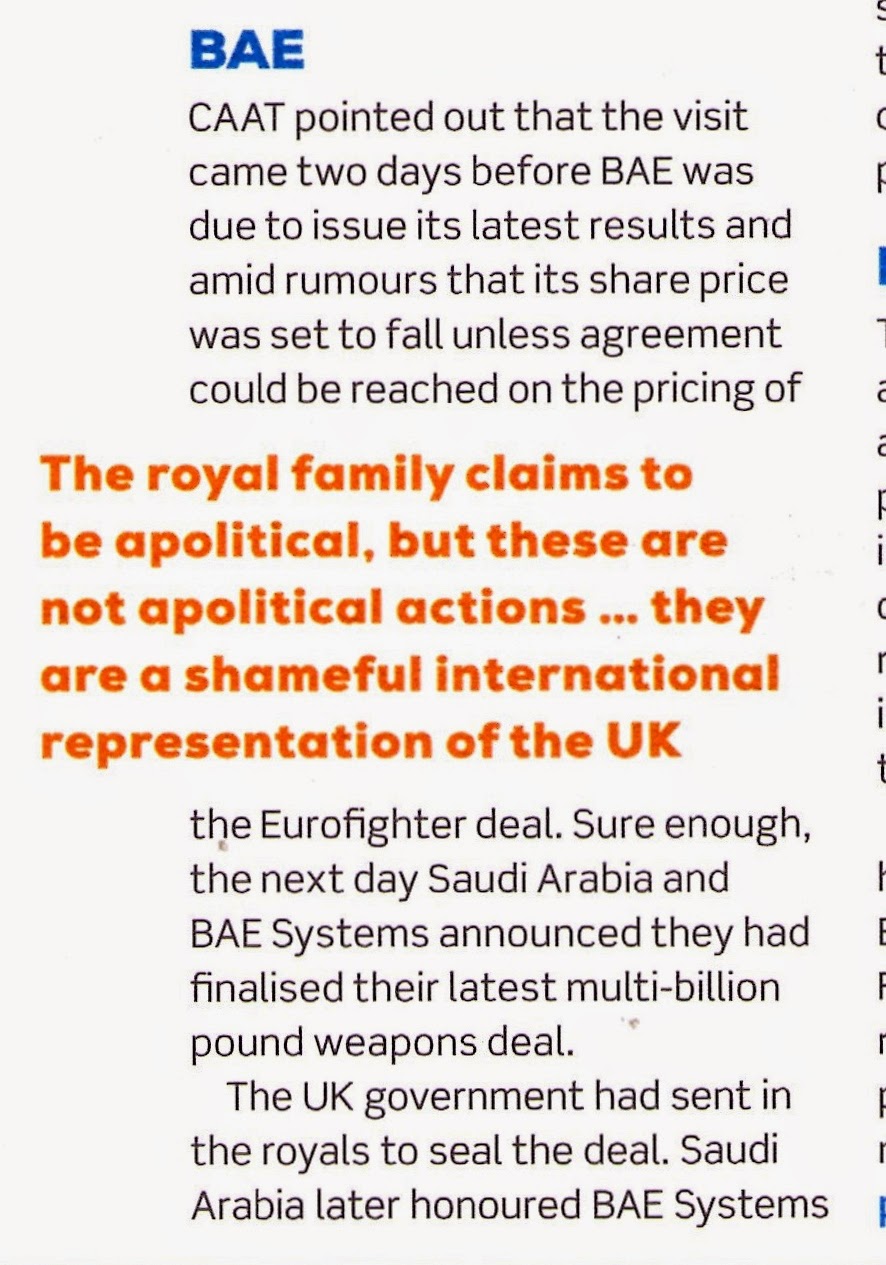 And Jesus said, "Father, forgive them for they know not what they do."  And they cast lots to divide his garments.  (Luke 23:34)

Dr Mahzan bin Haron, this posting is for you.  You (among a couple of others) nagged me incessantly to get to work on writing.

Three days ago you wrote me  "If you stop, it's like a doctor who stops practicing because there's so much diseases and sick people around and it's only getting worse now."

I'm weary and the leaves are turning brown ...

Thank you, me duck!

Just something that I've always thought about White Anglo-Saxon Christians but never had the skill to write about it and be as artuclate as you are ma'am.

Thank you so much.

We are all getting on and I don't know how to educate my children and cucus. Now I can direct them to your beautiful blog.

The ammunition for tackling the bigotry and hypocrisy of Christians (not Christianity as taught by Nabi Isa) against Islam are there in the history books and now on the Internet which anyone can click on to.

Maybe we have to think seriously about the way (especially the contents) we teach history and Ugama to our young ones and in our "hallowed halls of learning".

At 70, I find my energy - to take up cudgels for my Faith and my people - flagging, but every little bit helps.

Thank you and bless you for being a concerned Ayah and Atok.