Now that  Remembrance Day, Armistice Day, and Poppy Day  have been laid to rest - for this year - it's time for more reflections about invasions and killings post-1945.  The First and Second World Wars were basically tribal wars between Christian- European civilizations in their bid for supremacy,  not only in Europe, but in the rest of the world.

People from other non-Christian 'civilizations' were also dragged into this bloodshed - those from the British, French, Belgium, German, Italian and other Empires.  As for the involvement of the WASP  (White Anglo-Saxon Protestant)  USA, they chose to do so - and at the end of both world wars, they became - till today- the most powerful nation on earth.

The bloodshed of both world wars has been recorded in endless books, documentaries, videos and  movies.  This year marks the 100th anniversary of the First World War, a war that killed almost a whole generation of young men, a war aptly described as a "war fought by lions and led by donkeys".
People were more at ease when it came to remembering the dead of those two world wars. But the wars and deaths of post 1945 - the killings of the Vietnam War, the 'Troubles' in Ireland, and the invasions of the Middle East pre and post  September 11 were unpalatable.  The victims, overwhelmingly were not "us", and the commemoration of the perpetrators sticks like craw in the throats of the afflicted.

"...... it will be the last time that I bear witness to those soldiers, airmen and sailors who are no more, at my local cenotaph.  From now on, I will lament their passing in private because my despair is for those who live in this present world.  I will no longer allow my obligations as a veteran to remember those who died in the great wars to be co-opted by current or former politicians to justify our folly in Iraq, our morally dubious war on terror and our elimination of one's right to privacy."


They are both brave and principled men.  If only Muslims in Britain are allowed to express their reservations and principles in the same way ;  " ..... for me to wear a poppy would be as much a gesture of disrespect for the innocent who lost their lives in the Troubles -..( James McClean) like on  the 'War on Terror' in the Middle East.

James McClean, you have taken the words right out of the mouths of many Muslims in Britain!

In a blaze of glory, the last remaining British troops left Camp Bastion, Helmand Province, Afghanistan on 26 October 2014.  Operation Enduring Freedom in Afghanistan was supposedly to
"turf out al-Qaeda .... 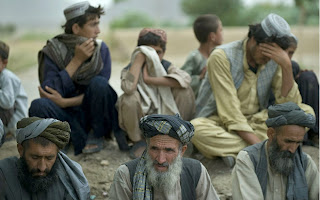 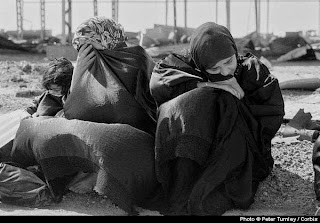 ... and finally to protect the streets of Britain from Islamist threats."
Read:  http://www.thecommentator.com/article/5346/why_did_british_troops_go_to_afghanistan


So what's the verdict now that the British troops are back home?  453 deaths of British personnel were recorded - from October 2001 to October 2014.  Their names and photographs were publicised by the British Government

UNAMA ( United Nations Assistance Mission in Afghanistan) "estimate that 11,614 civilians died .... in Afghanistan.  However, ..... this figure - which only accounts for just over half the war - is likely to be an underestimate.
The Watson Institute of Brown University in the US, estimates that 21,000 civilians have died as of February this year, ..."

"Ultimately  we will probably never know exactly how many civilians died as a result of the conflict or what their names were."   (Note the use of the benign word 'conflict'.)

So, here's the background for the above diagram.  The large green square represents the 21,000  (underestimated) civilian Afghani deaths  and the white patch within illustrates the proportion of British fatalities.

When Christians moan the fate of Christians in the Middle East and turn to Princes and Patriots for succour -  the carnage of Muslim deaths in Afghanistan  (and Iraq and Libya and Palestine) provides the other side of the coin - the context so to speak.  Hallelujah!

Today, in Australia, PM Cameron talked about UK Jihadists returning from the wars in Syria and Iraq, about them being threats to the UK and how to stop them form going or coming back. Though I do not condone the actions of these jihadists, I can understand their motivation.

Strangely, British Jews who go to Israel to fight against Palestinians and Muslims (and kill them too in the most horrific of ways) are not considered threats to the social, cultural and religious fabric of the UK.

This is the appaling hypocricy and the double standards of the Western Christian'civilsations'towards people who are 'different' from them.

Thank you ASH for putting things down so succinctly which most of us cannot do.

You know, you write well and you have raised some good points. That's me putting on my teachers hat!

Have you thought of writing/blogging? That's me nagging you.

The issue of British Jews fighting /killing Palestinians in Gaza?? Ssshh .. no one wants to talk about it, especially the British media. The sword of accusations of anti-Semitism will smite thee.

As for those dastardly British jihadist Muslims with the potential of wreaking havoc in mother England - they're all the rage!!!!! Off with their passports!!