The last posting I did on Sekolah Menengah Yusof Ishak or Yusof Ishak Secondary School was on  5 November 2013.
Read :  http://anaksihamid.blogspot.co.uk/2013/11/darihal-rokok-road-to-sekolah-menengah.html


Here's the next part - belated - but better late than never.

It began with how I was trained  - to be an accredited teacher - notwithstanding the advice given to me by the Che'Gu in the Ministry of Education!  There was no Institute of Education then.  It was just the Teachers' Training College - where they produced Primary School teachers ( with O Levels),  Lower Secondary School teachers ( with A Levels) for all the language streams.  Graduates were given a one-year, part-time, in-service training  - with one difference. There was no provision for Malay Stream Graduate teachers.  One can understand why by checking - for instance -   the number of Singapore Malays who were bonded by the Special Malay Teaching Bursary in this Convocation Programme of 1967.  There were only three of us. 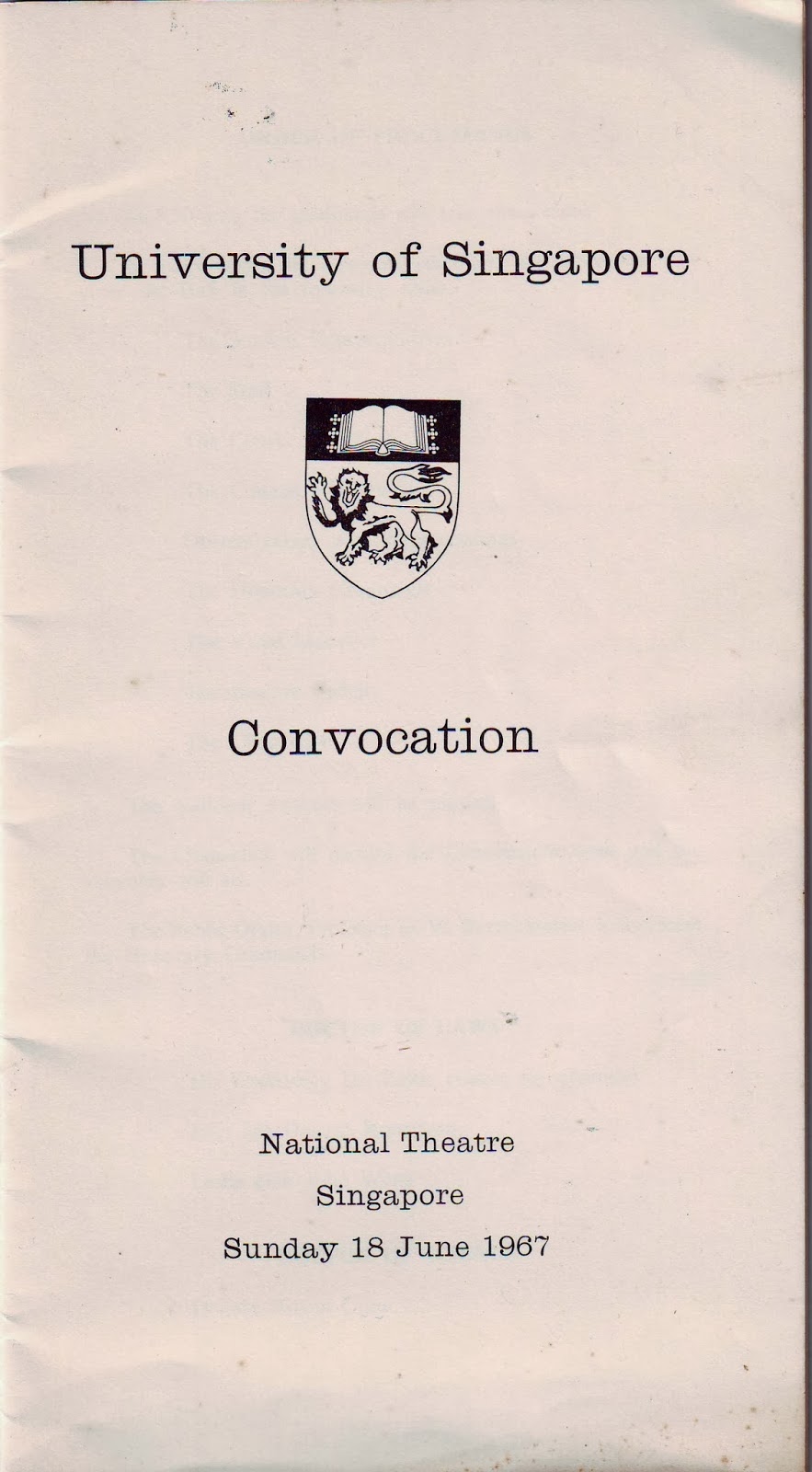 So I embarked on my professional training as a teacher  from May 1967 to April 1968.  This Certificate ensured that I could be let loose in YISS or any school in the Republic of Singapore. 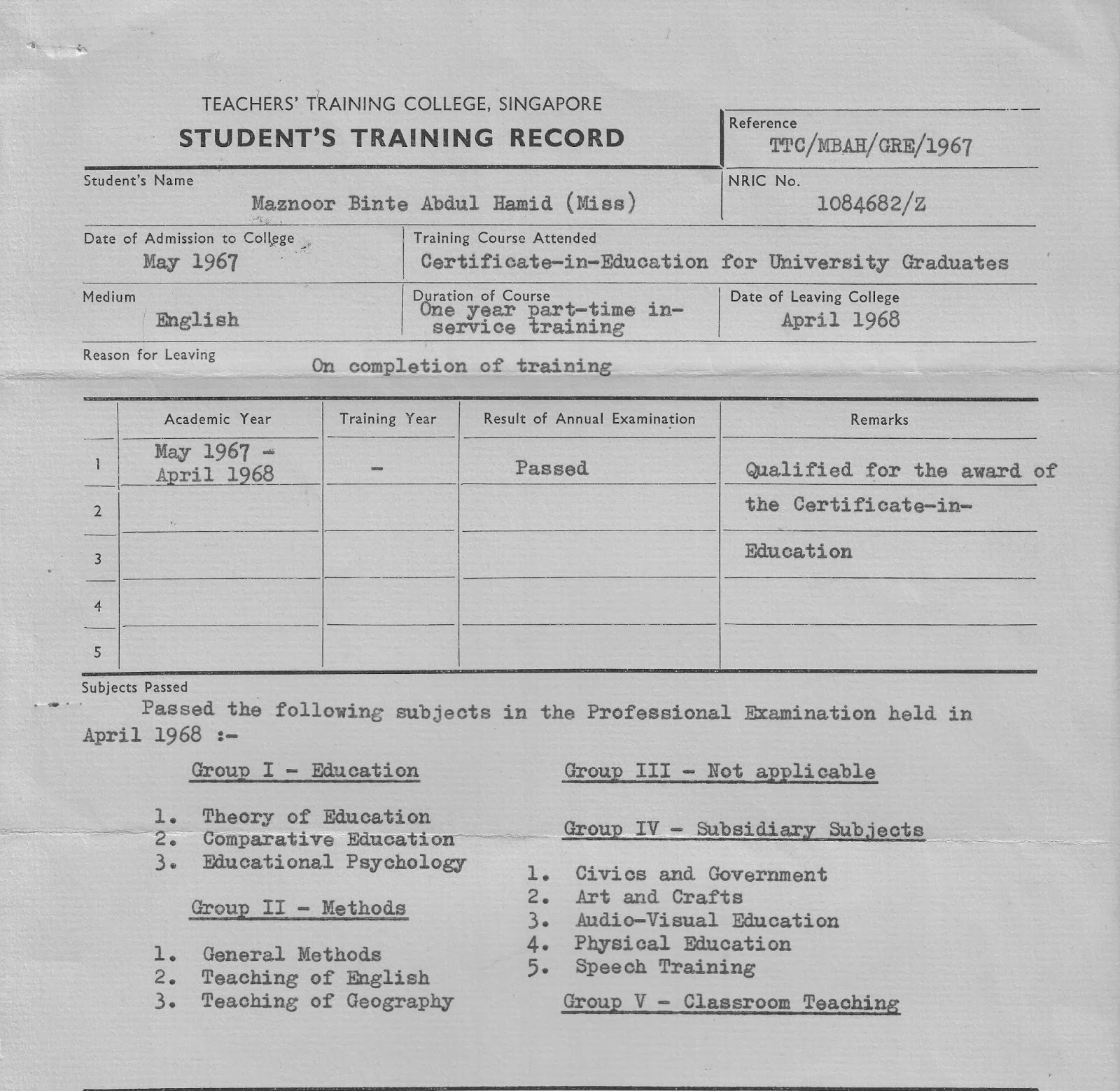 But for me, there was one problem.  For Group V (Classroom Teaching) nobody came to supervise me in the classroom until just before the Professional Examination.  Why?  As there was no provision for training graduates to teach in the Malay medium, I did my training in the English medium.  Of course no lecturer could supervise my classroom teaching because I was teaching in Malay!  So I was left on my own, dutifully writing and preparing my Lesson Notes waiting for a Supervisor.  I attended my lectures in the afternoon (after teaching in the morning), wrote my essays, did my Examination - albeit with a bit of ponteng now and then to Orchard Road and the Lido Cinema.  Then someone must have noticed that Maznoor binte Abdul Hamid had not been supervised for her teaching practice - at all!!  So towards the end of the school term, the Director of Teacher Training (Malay Section) at the TTC came to 'supervise' me.  Well, there was nowt to supervise because the school examination was just over and we were just minding the kids with quizzes and games.  Nevertheless, I had to make a 'show' of teaching  my students who were puzzled at what was going on.  He  checked my Lesson Notes of the last few months and then he left.

That was how I cleared the Group V - Classroom Teaching for my Certificate-in Education.  No wonder  the Che'Gu at the Ministry showed me the "Rokok".

As for the part of teaching in Malay,  I shall try to summarise my agony and grief in teaching Ilmu Hisab, Ilmu Alam, Tawarikh and Karangan during my first year of teaching.  I was given Menengah Satu to teach -  children from the Southern Islands.  Normally Menengah Satu classes would be in the afternoon but they were given a concession because of where they lived.

Here they are - my unforgettable first class. 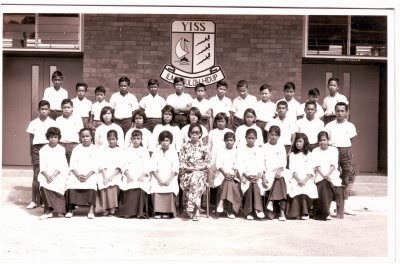 I reckoned they had a lot more to teach me than I could teach them.

I think I now have to clarify my situation about teaching in Malay.  Firstly, I'm an anak Melayu through and through.  I have not deigned or  'forgotten' how to speak my mother-tongue.  But that does not mean I am automatically qualified to teach various academic school subjects in a Malay secondary school.  As teachers, we know that it is more difficult to teach young children.  You need the right technique and to choose the right words to put across simple terminologies like suhu, tekanan udara, sistem pentadbiran, tamaddun, angka pecahan (fraction), segitiga, segitiga tepat, segitiga duasama etc. etc - especially for my Menengah Satu charges.


How did I survive ( if I did ) my first year?  Well, every weekend my Abah and I would spend hours translating and preparing my Geography, History and Mathematics lesson for the week.  We would have at our disposal the English-Malay Dictionaries prepared by DBP.  We had to look for the right terms to use as well as construct the right sentences to frame the lesson.  I guess I really earned and deserved that $700 salary!.

But one little faux pas I have to mention.  Our Senior Teacher for the Malay medium was Che'Gu Shukur - a gentle hardworking teacher of the old school.  He was passing my class one morning.  He then called me over to the door.  He corrected me - ever so gently and kindly and quietly that the word 'river' was spelled as sungai and not sungei.  I did feel stupid and I thanked Che'Gu Shukur for putting me right.  You see, my English language textbooks spelled it with and  'e'  and not an  'a'.  The colonials spelled it  the way they pronounced it.  I wonder if that Che'Gu in the Ministry knew about that problem before he suggested the word  "Rokok" to me.  Compared to our refined Che'Gu Shukur, this bureaucrat was too clever by half!

Just for laughs:  This was how my use of Malay - as my mother tongue, my medium of teaching and a requirement for confirmation in the Civil Service - became slightly entangled.  Even though I was considered 'good' enough to teach in Malay in a secondary school I still had to be certificated with this piece of paper. 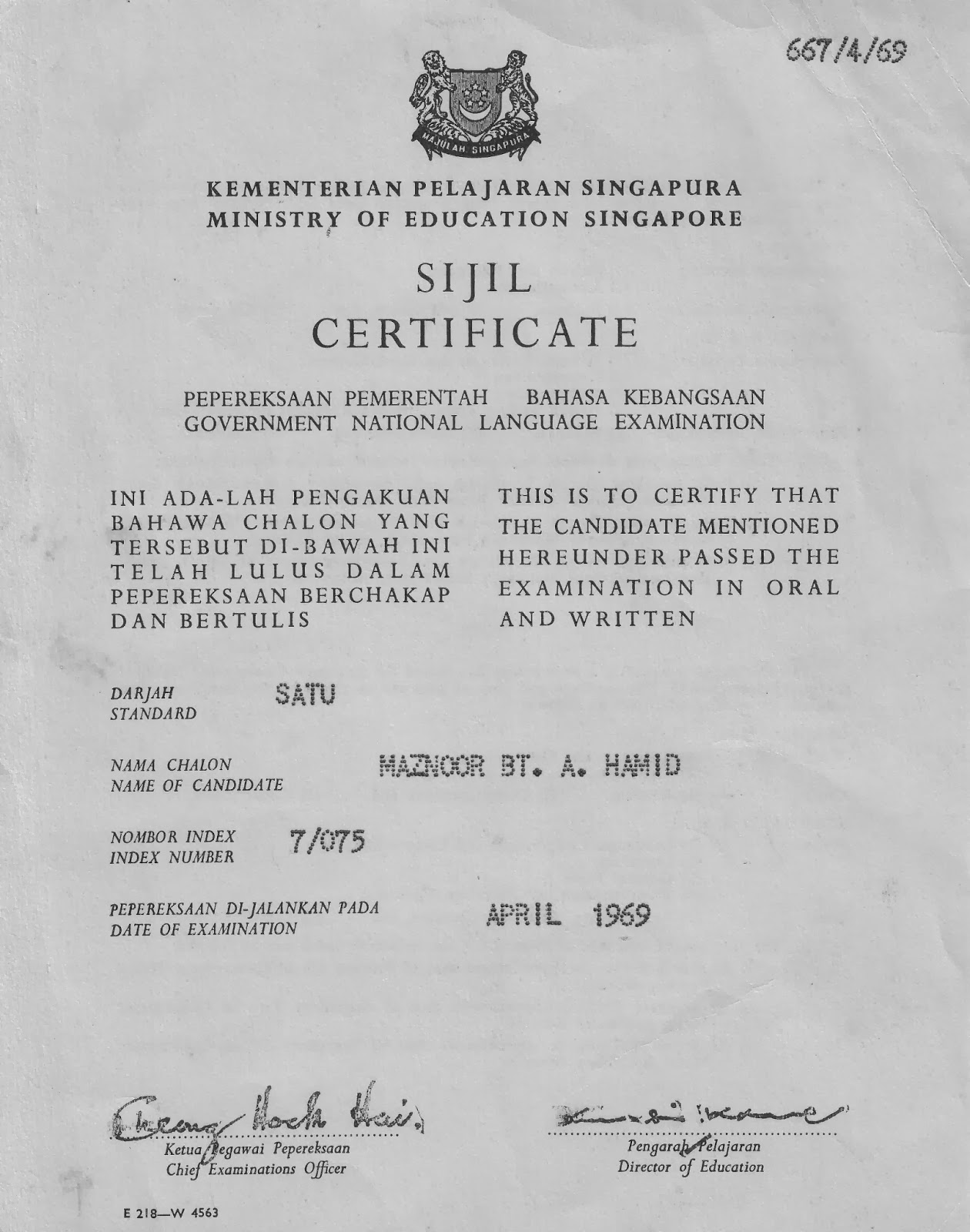 What level does this certificate identify with?


All in all, my qualification for teaching academic subjects in Malay in a Malay Secondary School ranged from P7 ( for my 'O' Levels)  and  a pass at the level of Primary Six in a Malay Government School !!

I now think I will really need that "Rokok" from the Ministry's CheGu !

There are so many stories and experiences I could recall  in my seven years at Sekolah Menengah Yusof  Ishak.  But we old people have to be careful not to natter on too much about the past.  But bear with me these few samples.  I have a higher estimation of Che'Gu Shukur - an older generation of Malay teachers- than I have of those of my peer group and those a little younger than him.  Because I was a woman and (I will not hesitate to state this) because of my qualification,  many of the male (and female) Che'Gurus did not regard me as their 'cup of tea'.  I was almost an anathema to them.

It's ironic that the non-Malay English medium teachers in YISS did not harbour such a hang-up over their younger male and female graduate teachers.

In those days, schools were not provided with Overhead Projectors.  Maps had to be drawn on the blackboards - especially special maps that were not available in the Malay textbooks.  In the Geography Room, I drew a map of  the Industrial Region of the Ruhr Valley  (for my Menengah Empat students), which took up less than a quarter of the board.  I left a courteous note asking that the map remained on the board as I had four classes of Geography to teach.  The very next day, I discovered it had been erased by someone, a colleague from the afternoon session!

Examination questions which had been discussed and chosen by a panel of teachers were leaked to students - so that the teachers concerned would look good when their classes gained top marks and many passes.

I embarrassed my poor Abah when I asked him the meaning of a word that my colleagues were bandying about during recess time in the Canteen. Each time they said this word, they looked at me!  This word was part of another teacher's name.  Abah bit his lower lip and said , "That word refers to a man's private part."

From then on, I would sit away from these Malay male colleagues in the School Canteen whenever I could.

One Saturday, during an  ECA  period, I went across to this Malay girl who was crying by the staircase.  She told me her father was ill in Malacca and she had no money to pay for her fare.  So I gave her $30 to help her out.  (I was then earning about $23 a day.)   In another instance, I offered a monthly allowance of $20  for two years, to my  student, Ang S.C. ( from Pulau Semakau ) when he started his 'A'Levels at National Junior College.  I had taught him for 4 years in YISS and he came from a needy family.  I thought my little contribution could at least subsidise his bus fare from Old Jurong Road where he lived to the NJC at Bukit Timah.

I found out later from my students that the crying 15 year-old had actually used the $30 to run away with her boyfriend!  Ang S.C. did write once or twice to thank me for the monthly Money Order.  I heard later that he had joined a Christian Group in NJC.

All these sound very much like "Meludah ke Langit".  But there were also wonderful people like Che'Gu Ayesha Bevee and Sim Loo Lee.  Ayesha is seated to the extreme left, front row, Loo Lee is fifth from the right and  Che'Gu Syukur is seated eighth from left. 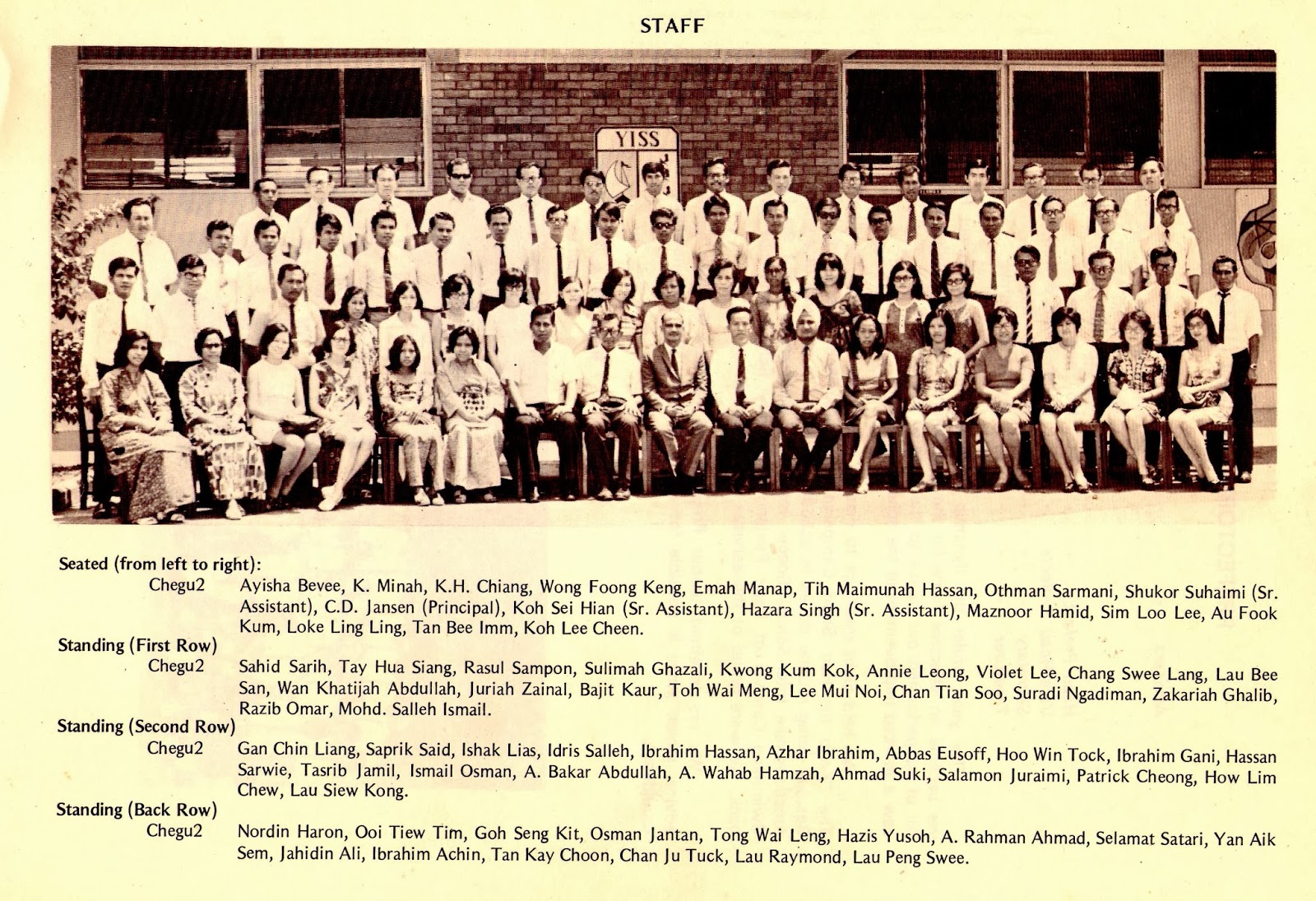 In 1972, after 5 years,  I cleared my bond with the Singapore Government's Public Service Commission.  With my dear good friend Loo Lee - in 1974 - we headed west for London to further our studies.  But that took some doing for me - that's another story which will only bring up too much bile.