Our good friend Jack has been over on most recent Saturday evenings to watch a very interesting TV programme on "Wild China".  We would share a small supper and after the programme, Jack and spouse would  depart to the latter's study where the two of them would go surfing YouTube for Opera songs,  not the fluffy modern singers like  Katherine Jenkins and Il Divo but the ones from the 30s, 40s and 50s like Amelita Galli-Curci and  a younger Maria Callas.     In the process they discovered a fabulous young tenor from the US called Lawrence Brownlee - Jack, an expert on classical singing, reckons he's the best singer around at the moment.....better than Luciano Pavarotti.

At about 11 pm we would walk Jack back to his house which is just 5-10 minutes away.  Before the three of us became old and decrepit it would have taken us just short of 5 minutes !!

Last Saturday, on our way home from Jack's, we bumped into our former neighbour and friend Doug.  He was walking home alone from Barry's house (about 20 minutes distance from his own house).   The time was nearly a quarter to midnight!   He was just as shocked as we were to meet up so late.  We told him of our trip back to KL and there was a hint of disappointment in his voice when he expressed his regret that we had shared only one get-together since we got back to Leicester.  You see, we had arranged for Doug to pop over for dinner five weeks ago.  But we, especially AsH, had a nasty infection for three weeks and everything had to be put on the back burner including our planned  return at the end of  January.

We got back home, we pondered and we agreed that despite our imminent journey we must have Doug over for a meal.  And we did just that two days ago.  And Doug was so pleased to share the meal and the time.  And we walked him home as well !

Douglas Holly and we went back a long way, since the mid 1980s.  He was then a lecturer at the University of Leicester School of Education.  I had applied to do my Masters at the School of Ed in 1983 when I was about to end my teaching contract in Brunei.  I waited and waited in vain for a reply from them.  Finally I had to call upon my former Geography Tutor who was teaching in Leicester University to make an inquiry.  He got in touch with his 'mature student' Frank Moule who knew a lecturer from the School of Education.  That lecturer was Doug Holly.

Now one could describe  Doug as an old-fashioned liberal - his political stand  would be very much to the left of centre.  He went to see the lecturer-in-charge of Admissions to find out what had happened to my application.  It seemed that this lecturer Dr RK  had chucked my application to the bottom of the pile, simply because it had come from Brunei!  Doug then called upon Morag Carsch who was in charge of one of the courses I was applying for.  They both looked through my 'suitability' and they both advised Dr RK that I should be given a 'yes' reply soon - before I  'relocated' to another University.  I did Doug and Morag proud because I became one out of two students to gain a Distinction in the M.Ed course.  And I did enjoy bumping into Dr. RK whenever  I could - just to gloat.

After the spouse and I got married we visited Doug at his little terrace house at Oxford Avenue.  We liked the cosiness of the Avenue  (and Doug!).   So sometime during late 1986 we bought No 10 Oxford Avenue and we moved in.    I could not think of a better and happier place to live in - our neighbours and the neighbourhood  were just perfect.  Today, sadly, as with most things, it has all changed - for the worse.

We were neighbours for 19 years.  We got on because on many political and social issues we had a lot in common.  However at the height of the protest over Salman Rushdie's  "Satanic Verses" in 1989, we discovered a chink in our relationship.  We could hear on that summer's day in 1989 loud protests against "Satanic Verses" and Salman Rushdie coming over from nearby Victoria Park.  In summer, most of us kept our front doors open.  From Doug's door we heard him shouting angrily against the protests from the Park.  His one sentence  "After all we've done for them!" shocked us.  "Them" referred to the Muslims!  And this came from someone who saw himself as a broad-minded liberal and a vocal supporter of multi-culturalism.

This made me realise that the white man's liberalism, anti-racism  and broadmindedness are really skin-deep. When it comes to Islam and Muslims, that entrenched hostility and insecurity which fills their religion, literature, history and  culture floats up to the surface - even for someone like Doug who sees himself as an atheist.

We decided we had to square this circle with Doug.  We went over to his house and had a civilized discussion about freedom of expression, about the pathological phobia of the West against Islam and Muslims and what we thought of Salman Rushdie the Wog, the darling of British culture and of the literati. It did not break our friendship - we were sensible, thinking adults and were willing to listen to each other.

That incident - and what I saw and heard in later years - pushed me to read and learn even more, especially about Christianity and Western history and culture.

Just after we got married, my father-in-law Professor  K.M. Buchanan posted me a little pamphlet ( from Wales where he was staying)  about what the West owed to the Arabs - in the field of mathematics,  philosophy, architecture, medicine etc. etc.   It was an eye-opener for me.  It only told me how ignorant I had been about the world , about my Muslim world.  I began my own journey into this world and the western Christian world starting with books by Edward Said , Noam Chomsky - and  V.G. Kiernan's "European Empires from Conquest to Collapse (1815-1960)."  For these discoveries I have to thank my father-in-law Keith and his son.

After that little fracas with Doug I articulated my frustration in a long essay about the context of the  "Satanic Verses" issue which I still store in my files.  I wrote a letter of protest to The Independent which was of course heavily edited. 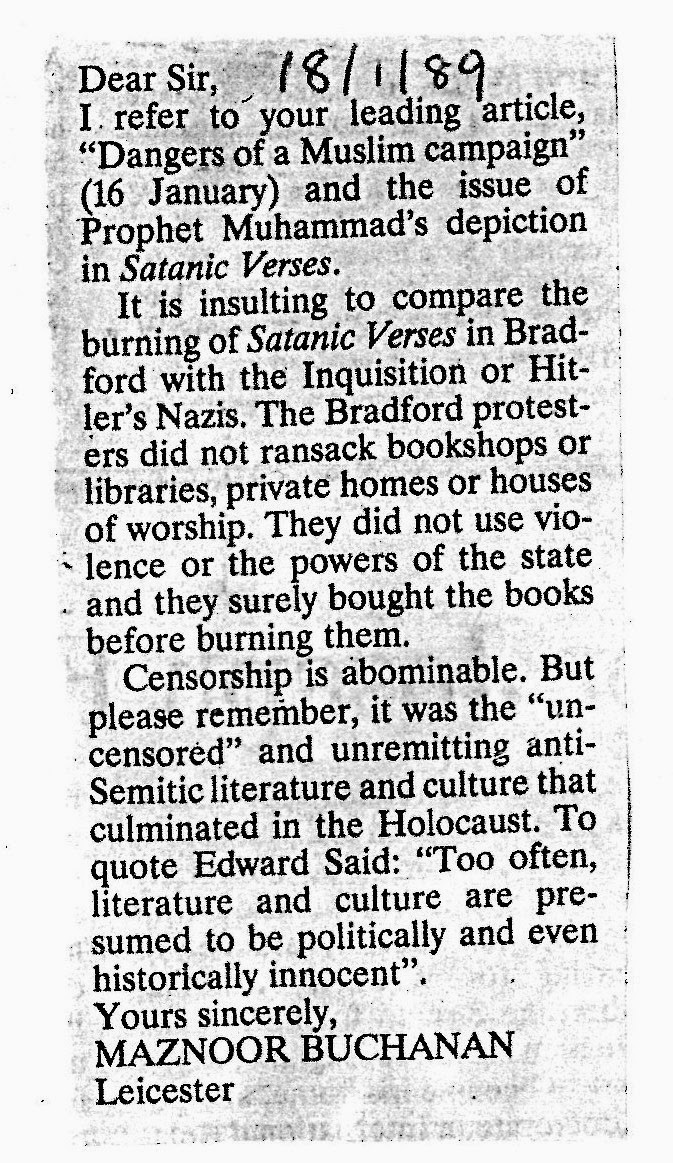 From then until today,  my inquiry and my learning have not ended  The maverick and rebel in me became even more consolidated and tenacious.

As for Doug and us, our friendship grew stronger with the years.  We have a lot of respect for him.  He remains committed to CND, Friends of the Earth and the local Community Committee.  He has lived alone for as long as we've known him.  He has his family who keep in touch with him especially for Birthdays and Christmas but he leaves them very much to themselves and makes sure that he doesn't become a burden to them.  He is a keen solo traveller, has been round the world sans the frills and luxury, goes to the gym and takes a long walk in the English countryside  ( usually ending at the local Pub) every week - and he loves my cooking!

This has turned out to be a long posting when all I wanted to write was about our trip back to KL - arriving InsyaAllah on Friday 21 February - just a day short of my 70th birthday.


Anak si Hamid and Son of Buchanan have travelled a long way - physically and metaphorically - together,  and with people like Doug Holly and Jack Marlowe as inspiration we hope to do a lot more, InsyaAllah.

Have a safe journey...Welcome home Puan AsH and Mr Buchanan.
May Allah bless you both.

Thank you Anak Md Deris - from the two us.

We leave for Heathrow in 6 hours time - we could do this with one eye closed and one arm tied behind the back - there have been so, so many.

Look forward to putting up our feet in my Tanah Air.