The Yusof Ishak Years - A Preamble

........ is somewhat like recalling one's first love.  It's a touching experience - but sometimes it's one you prefer to forget or suppress.


My launch into Singapore's Education Service and into Sekolah Menengah Yusof Ishak - today known as Yusof Ishak Secondary School - was not an inspiring encounter.

As a recipient of the Special Malay Bursary for University, a career as a teacher would be my destiny.  And so it was a requirement for the Bursary that you  take up teaching subjects like History, Geography and English.

In the first year of Singapore University an undergrad had to choose three subjects.  You then specialised in your choice of your Degree during the Second Year.  You could decide on either a One-Subject or Two-Subject Degree.  Of course you needed good results in your First Year before you could qualify for a One-Subject Degree.


My subjects in my First Year were English, Geography and Political Science.  I loved the challenge of Political Science (PS) - it widened my interest in what was going on in the political maelstrom of Southeast Asia and the rest of the world.  This was the time of the bloody Vietnam War, of Singapore in and out of Malaysia, of Confrontation with Indonesia, of racial riots and the rising serpent's head of racism and racist politics in and out of the Campus.

I desperately wanted to do PS One-Subject.  I was eligible for it and it would be so satisfying for me to study a subject I loved.  But, because of the conditions of the Bursary I had to twin PS with Geography, a teaching subject.

I had been keen on Geography since my days in Primary School.  Even today, I am still fascinated by maps and atlases and analysing the connection between climate, landscape, demography and economic activities. But then, as an undergraduate, I was to be sorely disappointed.  The Professors and Lecturers in the Geography Department were quite soulless and unimaginative.  The members of Staff - some of them, not all - ranged from the self-centred and smug to the opportunistic.  To be fair, I suppose you could find the same atmosphere in most of the Departments in Singapore University in the 1960s.

As for the PS Department, they were not partial to any particular category of students - we were all undergrads who needed to learn and to be taught.  Also there was a very mixed assortment of Staff members from different parts of the world. As far as I can recall, there were hardly any local dons.  I supposed that mixture encouraged a more liberal and open relationship between the academics and the students. For me, that made learning a very fulfilling and enjoyable experience.

My choice of subjects was an odd one -  I think I was the only one in my year combining Geography and Political Science. For the Final and Third Year Examination (which also determined whether you got a General or Honours Degree), my Time-Table was so ridiculously tight.  I reckoned it was scheduled for a candidate in a pressure cooker.  I clearly remembered completing  half of my 8 papers on two consecutive days.  I just didn't have time to breathe or to stagger my revision like most of my peers.  We all know how the scheduling of an Examination Time Table can make or break a candidate.  But that was the luck of the draw and it had to be taken in its stride - a good lesson that served me well for the rest of my working life.

When you are young, you harbour such idealism about life and learning in the hallowed halls of a University.
You imagine your lecturers to be dedicated scholars purveying their knowledge with much pride  and interest.  But the scales fell from my eyes. Most of them were condescending and treated us like school children, like a kind of low life.  Some were blatantly lazy like the American lecturer who took up half of the lecture period on British politics regaling us about how the English hold their teacups. Then there were those who were pathetically 'hamsab'  (lecherous in Cantonese) and who spouted cliches like  "Singapore has the highest density of pretty girls in the world".  Still, these we could handle.  It was the arrogance and  the patronising attitudes of some of the Academics that were harder to absorb.

You also imagine your fellow students would be keen to discuss, debate and share their knowledge and interests with you and others.  Instead they stashed and hid the required reference books in nooks and crannies of the Library only for the eyes of themselves and their cronies.  As for the Red-Spot books, really crucial reference books which could be borrowed for only an hour - you would  find your name as fifth or sixth on the waiting list and yet you'd notice the same person consulting the Red-Spot book for more than two hours.  I soon discovered their technique - you got your boyfriend/girlfriend or cronies (that word again) to sign after you!  As I had no boyfriend, I reined in the help of my sarabat stall undergrad mates to sign after me.  As they say, 'when in Rome, do as the Romans do".

There also existed an unwritten Social Cycle - that female undergrads should start scouting for a boyfriend during the Second Year so that by the Third Year they would have a "steady" - to be followed by a wedding after Graduation.  There you are - you've made it - two pieces of paper!  A Paper Degree and a Wedding Certificate!

Crikey, was this what University was all about?

I felt so disillusioned that I would ponteng lectures and make a getaway to the nearby Botanical Gardens at Cluny Road to enjoy the company of the trees, the lake and the resident monkeys. I very nearly made a decision to leave University during my Second Year and apply for a scholarship in Physiotherapy in New Zealand.  But the head had to rule the heart because I could not renege on the Bursary - my family did not have the resources to fund my discontent.  Furthermore I had to remain where I was and eventually get a "good job" after my Degree.  That was the only way we could persuade our Abah - who had a heart problem - to retire.

After three years - in 1967 - my parents and I finally saw the day that we had been struggling for - my Convocation. 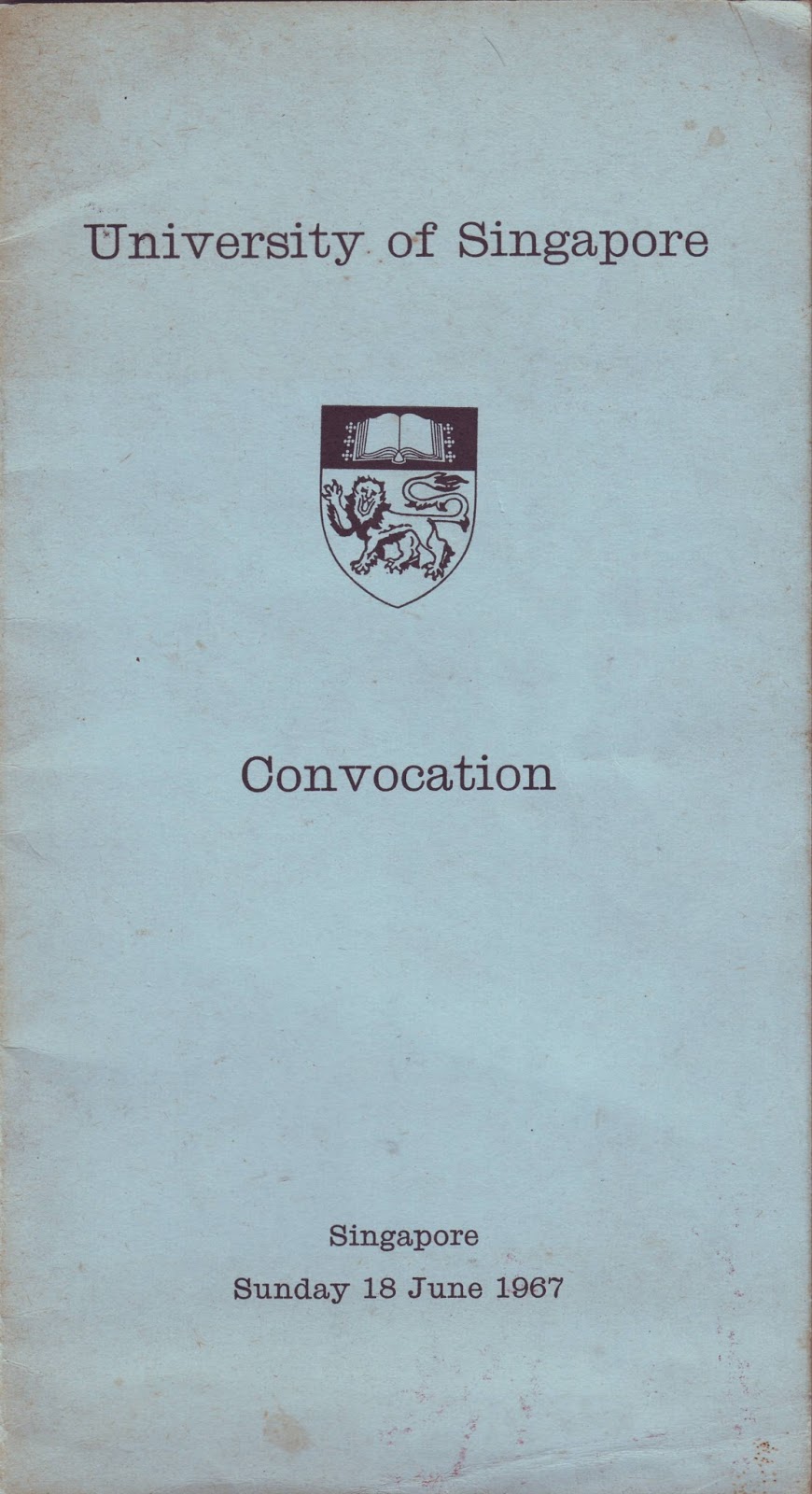 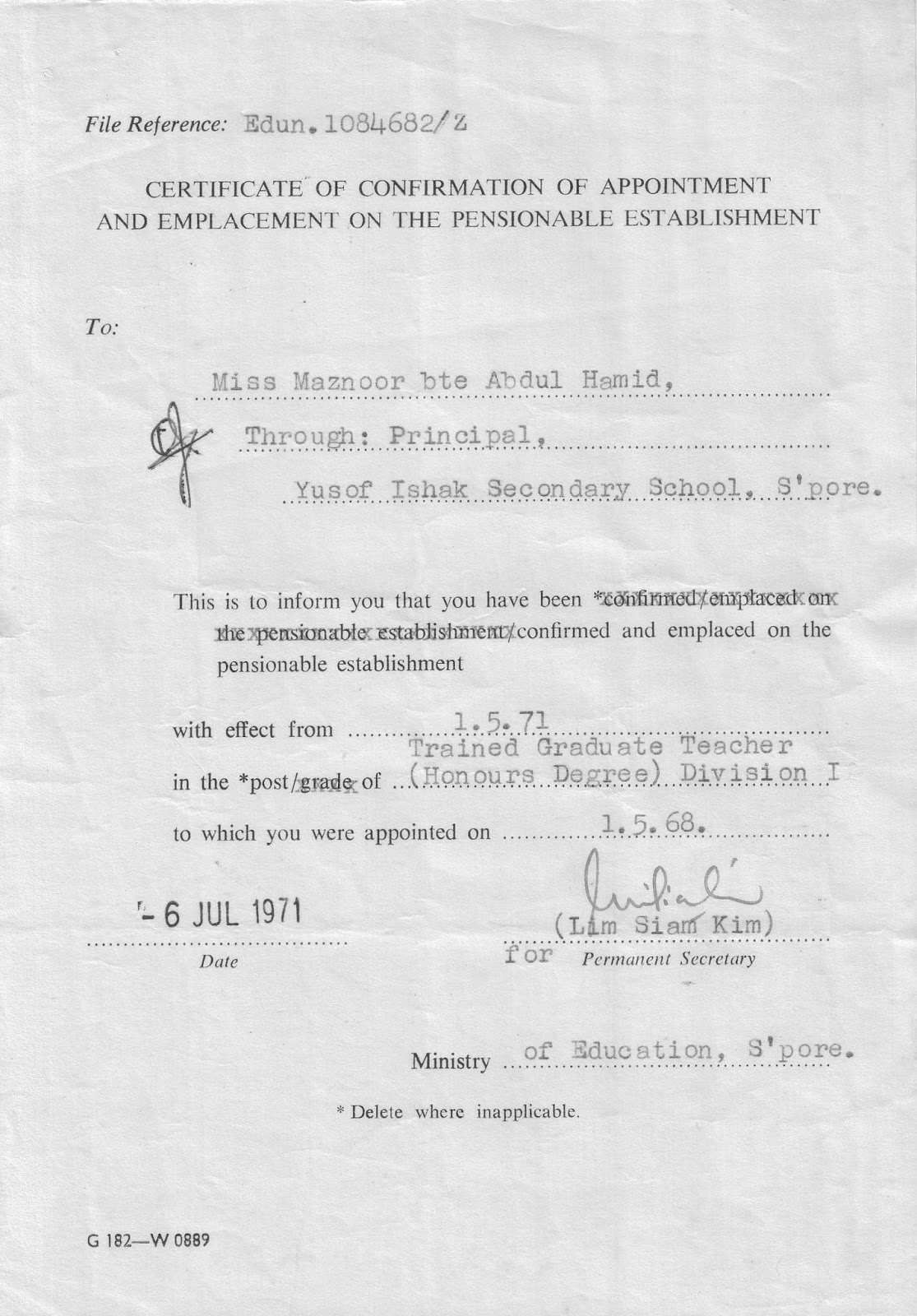 The real world was banging on my door.  University days were beginning to feel like a big sleep-walk.

Honours degree, Division 1.
Wow..
Keep writing, Mdm. I enjoyed reading your postings. I use your posting to "recalibrate" my English. Being surrounded by "malaysian english" speakers, my command of the English languange is going south, day by day...
Anak Md Deris

Thank you Anak Md Deris. Apologies for the tardiness.

Am pleased you enjoy the postings. I enjoy writing them.

I am flattered by your 'application' of my postings, but there also many examples of good writings in English like Putri Kamabakar.

The ability to write in English depends on the amount and type of reading that you undertake and continue to do so.

However someone who can speak well in English does not necessarily make a good writer and vice-versa.

I will never forget to speak my Bahasa Ibunda but I so regret my inability to write - my education was so lopsided. I do envy the younger Malays who are adept in both.

And writing is like riding a bicycle - it's very difficult to lose one's grip.