Every time we come back to Leicester we would bump into Denise and we would ask about her three boys :  Tony, her  husband and Elliott and Jordan her sons. She would smile and say "They're all fine - just a bunch of lazy gits", she would joke.  Denise and Tony were our neighbours when we were living at Oxford Avenue.  It's a tight little community - two rows of terrace houses facing each other and sharing a large garden in-between. We all knew each other quite well - just well enough to be helpful without being nosey and keeping our privacy despite the layout of the mews-style avenue.

In 1991, we had a street party to celebrate the 100th Anniversary of the Avenue and we managed to get ourselves into the Leicester Mercury - our local paper.    And here we all are, me, Iain, Denise and Tony, dear old Eva, Philip and Celia, old Doug, and everyone else: 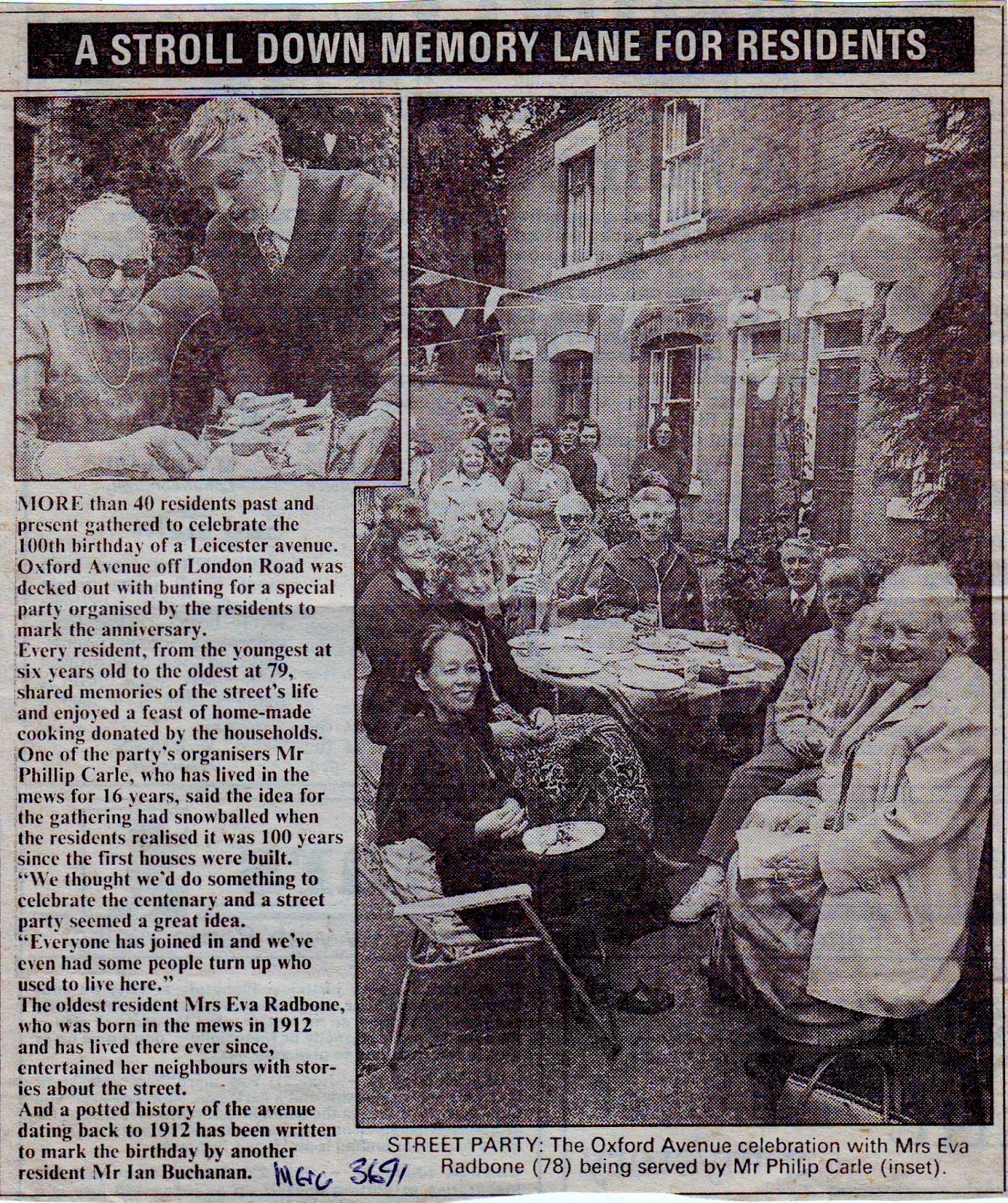 Nineteen years ago in 1994,   this lovely boy - Jordan - was born and he still remains the youngest member of Oxford Avenue's Community.

He was such a joy - a bubbly and happy little boy, with a mop of curly hair and bright, intelligent eyes, who always had a smile and a greeting for the older denizens of the Avenue.  I recalled summer days when we had our front door opened - just like Jordan's, whose house was just opposite ours.  He was about 4 or 5 when he would wander to our door and asked me "Where's your Da?"  (Da is Dad for Jordan). I pointed to our backyard to where the spouse was doing a spot of gardening and Jordan decided to check on my "Da".  Denise of course would be reminding Jordan to behave and not get in the way.

He was such an endearing child and always had some interesting questions to ask. When my nephew Shah came to visit, Jordan would be tailing him - wanting to know what Shah was doing with pieces of wood, and bits of wire and strings.  When the oldest member of the Avenue stepped into her little garden, Jordan would ask,  "What are you growing Eva?"   When he got a little older, we lent him some books because he was interested in planets and the Solar System.

Jordan was a loving and lovely part of the Avenue's life and our life too.  When he was 12 we moved out of Oxford Avenue but we lived near enough to still keep in touch with our former neighbours.

About eighteen months ago, Iain met Jordan at Evington Road.  He had grown into a strong sapling ... and he remained the same gentle and friendly kid that we knew from long ago, and still remembered to ask , "How's Maz?"

About two weeks ago, Iain met up with Denise and she told him Jordan was in jail. We were shocked and upset - what could this gentle lad have done to deserve this?  We were told by our former neighbour that in May 2013, Jordan was imprisoned for four-and-a-half years for trafficking drugs. 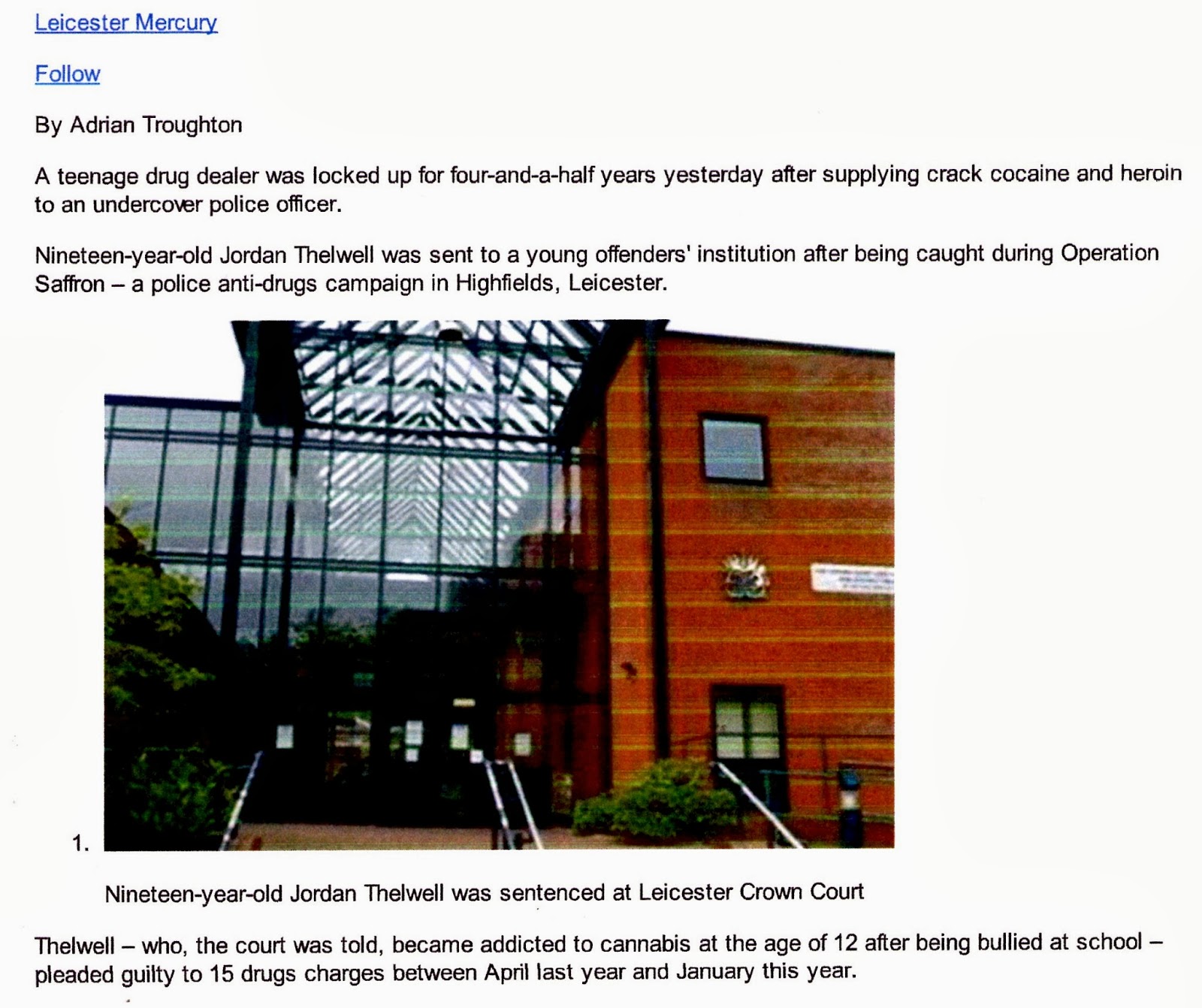 He was not the only one.


"The Child is father of the Man" - a saying attributed to William Wordsworth.  The sort of upbringing one is given as a child will determine the kind of adult one becomes.  However, I think this cannot be applied to Denise's and Tony's son - they brought him up in a very loving family environment to be a caring and courteous person.  Somewhere along his growing up years other agencies like the schooling system, the social environment,  and the mass and consumerist culture took over Jordan.   According to the local newspaper, Jordan "became addicted to cannabis at the age of 12 after being bullied at school".     Yes, Jordan was gentle, Jordan was bright - the perfect object for bullying by the hard and streetwise majority in a city school.

But it gets worse.    After all, mainstream bankers and financial consultants,  corporate international drug dealers, crooked and corrupt businessmen, politicians with blood on their hands all get away from the arms of the law.   Or, like that big global bank that launders Mexican drug money, given a pittance of a fine they can laugh at in board meetings.    A small fry like Jordan (and his loving, hard-working family) pays a far, far higher price.

It's heartbreaking for us and I cannot imagine how Denise and Tony must feel.  It's just one young life.    But Jordan's is such a gentle and sweet life.

Dear Jordan "Golden slumbers fill your eyes.  Smiles awake you when you rise".

Salaam, Ma'Ngah. I couldn't help but leaked tears when I read this posting. It's really sad how the system works. What good would imprisonment be for young Jordan? When so many crooks in ties and jackets, holding briefcases walk the street, robbing funds from people... and it's legal....

My dear Pootz in Boots,

Salam and thank you. Glad to find another soul with a soft spot.

And you know, what happened to dear Jordan is also happening in Malaysia.

And with the same crooks in suits as well!!

As Salam cikgu,
You're back in Leicester again. How nice. The next time you take a walk at Victoria Park just remember I used to be there too. I hope to share with you some of my pictures during my stay at Leicester. Hopefully we can connect through email and mine is at fatimah_kari@um.edu.my
Every time I read about this type of thing, it takes time for me to recover and feeling so " heart broken " and depressed too. As for the guy in black designer suite, they suck - most of the time.

heartbreaking. and yup, you are right, the same thing here in malaysia.

and it's complicated,or so to say "susah nak cakap"..environment, family, etc. i grew up with few friends at my Kajang town who didn't "menjadi", and i knew that sometimes things happen.

i believe most parents in this world wish the best for their kids, even praying while sulking tears at nite.

Yes, it's painful to see a young, lovely life go to waste - especially when I reckon he is more of a victim and less of a perpetrator. They got him hooked, then they sucked him into their poisonous pit. Someone, somewhere, someone larger than all these youngsters put together are making a lot of money - giving themselves and their family a "good life".

InsyaAllah, we shall connect by e-mail. Victoria Park is still the same!!

Salam and thank you firdaus.

You're young enough to know the pressures that young people like Jordan and many, many others in Leicester and Malaysia are subjected to.

I somehow think the kind of lifestyle and the norms that the mass media promotes give young people the wrong sort of values and a distorted sense of self-esteem.

As you noted, the parents too become victims of this poisonous drugs trade.

But .... there are also other crimes, even worse, that are not classified as "illegal".