Baby, It's a Jungle Out There

Tourism  has become, for most countries without resources, a most profitable industry.  This year the Olympics will bring to Britain, hopefully, a great deal of prestige and earnings.  But this 'sceptred isle' has no problem in touting her history and culture as a selling point to tourists from all over the world. 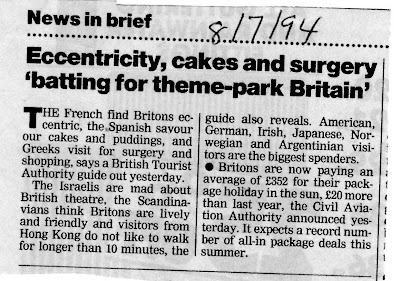 -
I saved that cutting from a long time ago - to remind me why London has more tourists than natives, why you must avoid the Lake District in summer because it is Beatrix Potter country and Stratford-upon-Avon is a must for many Americans.

Sometime in May this year I saw this product for sale at our local Evington Road Co-Op, Leicester.  More than the product itself, it was the advertisement that caught my attention. 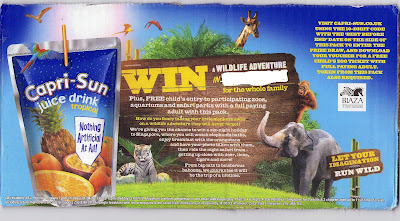 Buy Capri-Sun and you have the chance to win an all-expenses paid wildlife adventure.  This adventure promises : 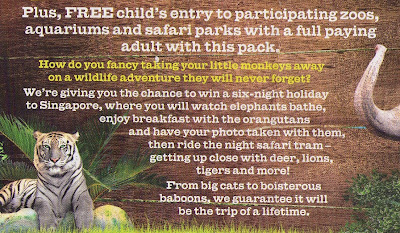 Watching elephants batheing? breakfast with orang utans? fraternising with deers and lions and tigers??
Is this jungle deep in the Amazon forest, the jungles of Borneo or the Congo Equatorial Forest?

No, it's in a country that's just 682 sq. km in area but which has 3,000 km of roads.  It's the largest exporter of ornamental fish ( 25% of the world's market).  The highest man-made waterfall is located here and at 30 metres high it's about one-sixth of the country's highest natural point.  It boasts of having the largest fountain in the world.  All these in the second most densely populated country in the world  (after Monaco) and where 90% of the population live in high rise flats.

It once described itself simply as an island, but now that teeny-weeny pockets of land and sand and reefs can be 'stitched' up to the mother island  (like the Southern Islands in the south-west) to create an extension - the existence of 63 other tiny islands have been included in the CV.

Well. this is the location of the Grand Prize. 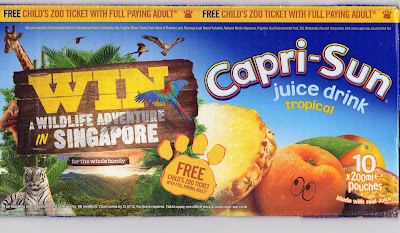 Perhaps the most enticing part is the Night Safari, which has been well publicised in the brochures. 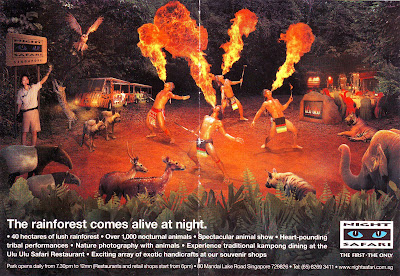 NB : Bukit Timah at 164 metres is the highest point, the waterfall is at Jurong Bird Park,  the fountain is at Suntec City,  SE Asia's largest gambling joint and the Night Safari is the pride of the Zoo, the first night zoo in the whole world!

The people who made all these wonders possible live here.

﻿
I wish all the winners a great time prowling in this promised  jungle theme park.  I wonder if George in Leicester got the prize.   Perhaps I should have made an effort too!

You sure know how to make things very interesting.. Iread it some where that Singapore was 578 sq km.. It seems to have grown in size.. They have made huge efforts to increase their land bank.. Buying sands from neighbours..

And she's still growing. Hope to do that in another posting.

Wow! I just happened on your blog today, and what a surprise! We in the UK are pretty depressed right now (non-stop rain, recession, bank corruption, etc., etc.). We need some excitement. We shall book a trip to Singapore! Just one thing though: those Singapore tribals look pretty cannibalistic - are they kept safely in cages? are they fed regularly? can they even speak English? But...Wow! Here we come - kids and all. Can we get fish and chips in Singapoor?
Dick Headley (Peterborough)

No, you and your brood are quite safe in Singapore. The natives have stopped the tradition of cooking white men in big cauldrons.

We are well on the way to wanting to be 'whiter than white' and this has nothing to do with a detergent advertisement!

And thank you for popping in.