From the Magpie's Nest - Part 2

This is taken from one of the books under my staircase. http://anaksihamid.blogspot.com/2011/04/raking-cupboard-under-stairs.html

Rich Cargoes of Tropical Fruits on their way to the Malay Market
The more insignificant of the trading craft are employed for this purpose, and on market days a perfect fleet of small vessels may be seen plying up the river bound for some convenient centre where they may discharge their ripe cargoes.  The craft used are chiefly dug-outs, or light fishing boats - things so small and crazy that only an amphibious creature like the Malay would trust himself in them. 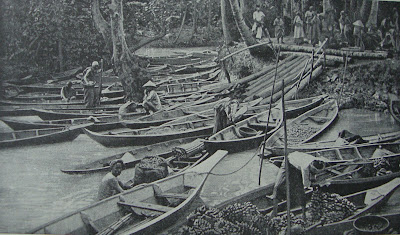 And this is from Look and Read which catered for schoolchildren in the urban areas during the colonial days. 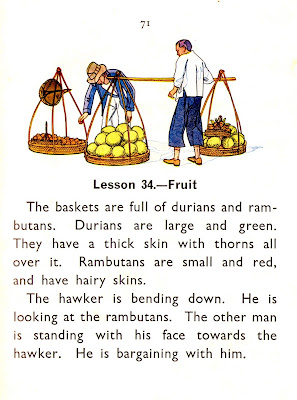 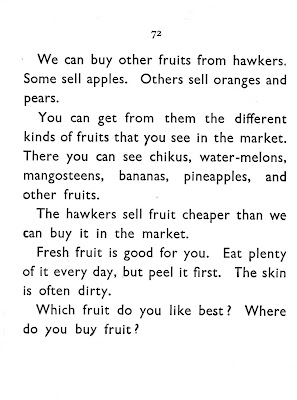 Wouldn't it be nice if Look and Read had also included the information in the other book?  It would make a very pretty coloured picture.  Also the non-Malay and Malay  school kids in the towns would have a more balanced  conception of the role of the Malays in trade and in their ability and willingness to work hard!!!  It would also reinforce the history  of the Malays as a sea-faring people who brave the waters of South- east Asia to trade and settle in an Archipelago that sets no cultural and political boundaries.  I love the idea of having an amphibious heritage.  But it's well-nigh impossible to practise and cherish that when the islands are turned into oil refineries and the coast, as at Pasir Panjang, becomes wharves and container ports.

The art and act of sailing are now a rich man's game, played at opulent Marinas and Yacht Clubs located at selective sites.  The Republic of Singapore Yacht Club (RSYC) has a state-of-the -art marina with 168 wet berths including a 140 metre long mega yacht berth and 135 dry berths. Care to know more?http://www.rsyc.org.sg/

And where is it?  It's located at West Coast Ferry Road, on reclaimed land  directly opposite 6 1/2 milestone Pasir Panjang Road.  My kampung was at 5 1/2 milestone.

Not too long ago,  Singapore would celebrate this. 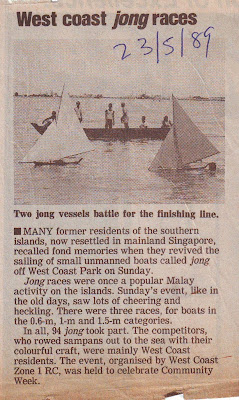 It's now classified as a lost 'maritime culture'. Read http://web.akitektenggara.com/index.php?option=com_content&view=article&id=297:reconnecting-to-lost-maritime-cultures-revive-interest-in-jong-racing-in-singapore&catid=40:articles&Itemid=56