Raking the Cupboard Under the Stairs

It's spring cleaning time again.  This time I steeled myself to clearing out the junk in the cupboard under the stairs.  It took three days in all, endured a bout of skin rash because of the dust and aching arms from moving and sorting volumes of heavy books.

﻿
I  re-discovered the Grease Filters for Cooker Hoods (bought 4 years ago),  my beautifully comfortable Kung Fu shoes which I bought at the Chinese Emporium, Orchard Road in 1985,..... 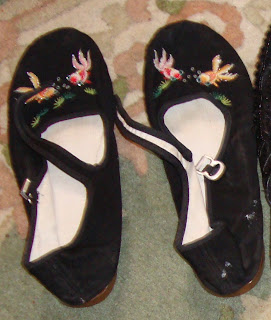 ..... our now dysfunctional cameras.  The Nikkormat was the spouse's good companion, bought in 1965 which took him to places that other parts cannot reach.  I reckon that Nikkormat received more TLC than I ever got - at times.  My Konica,  chosen by arwah Akim in 1979  went with me to Brunei, Sabah, Sarawak, India, Sri Lanka and Britain.  Both items are still much loved and I was over the moon to see them again. 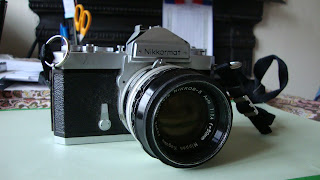 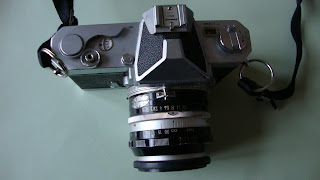 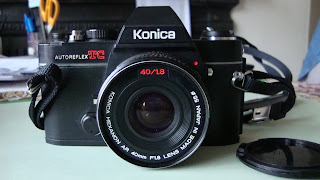 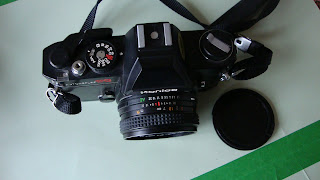 As I dug further into the deep recesses of the cupboard I found Iain's little hoard of books, all hardcover, all very intriguing for their content  but especially for insights into the history of Malaya and Singapore. As Smeagol (Lord of the the Ring) would say :  "My precious, my precious."
﻿
﻿﻿

And this is the piece de resistance from my cave under the staircase!!!

The above image is extracted from The Geographical Magazine  (May 1950 - April 1951).  Amongst other things, Ian Morrison wrote :

1. A love of colour, in their whole way of life as well as in their dress and articles of daily use, characterizes nearly all the Malay races.  [Why not?]
2. In Malaya today the position of the Malays has been seriously threatened by the arrival of the immigrant Chinese.  Although the Malays still outnumber the Chinese in the Federation and although the birth-rates for the two races as revealed in the 1947 Census are now approximately the same, Chinese outnumber Malays in the economically important States of Perak, Selangor, Negri Sembilan and Johore...  [ How did this happen?]

3. It is generally agreed that, if Malaya is to be a peaceful and prosperous country, an effort must be made to correct this unbalance.  But it is easier said than done.  It is as hard to persuade the Malays to modify the political rights which they enjoy and which they regard as one of the chief safeguards of their own survival as it is to persuade the Chinese to admit the Malays to a greater share in the economic life of the country.

Here (Item 3) is an example of a Colonial Bureaucrat who failed to acknowledge that Malaya is Tanah Melayu,   that the Malays' political authority is not a   privilege granted by the Colonial Powers for them to 'enjoy' and it's certainly not negotiable.  This is the very same bland attitude that regarded Lim Chin Peng as Malaya's Freedom Fighter!

After all Mr Morrison's  descendants in Britain today are adamantly against  immigration from non-EU countries.   Future British Nationals are now required to take English Language and Citizenship Tests, and an oath of loyalty to Queen and Country.   Best of all, David Cameron has abandoned the policy of multiculturalism.  So, why is Malaysia, or rather the Malays, expected to be  'whiter than white'?

All this I raked from the cupboard under the stairs!!  There are lots more salacious revelations when and if I can get away from living up to my  reputation as an 'indolent Malay' gambolling amongst the flowers in the English Spring.

Who says 'History is Bunk'!   It's the  interpreter of that history who writes bunkum.
Posted by anak si-hamid at Tuesday, April 05, 2011

Interesting historical observation (or can we say evidence?) you have there..

Goodness...you keep all those goodies under the staircase?
Those books are really jewels. And the words you quoted from Ian Morrison's pre-merdeka book is right on the dot. I just hope the Chinese in Malaysia realise their humble beginning in the then Malaya. Today, you cannot even quote history and cannot utter the word "pendatang"; lest you are labelled as racist. The Malays have been so patient, so willingly sharing the cake to a point they just ended up licking the icing on the cake while the crust of the matter is swallowed by others... Berputih mata... The Malays were so accomodating to assimilate the new comers to a point of changing the country's name from Malaya/Tanah Melayu to Malaysia..so everyone feels at home. Years have gone by since that day and you can see now what a mess we are in right now. We are still one nation, but 3 schools (national schools, chinese schools, tamil schools). Europe has started to show her true colours now...you can see how they openly and shamelessly shun immigrants. If you are not white, you are "one of them" and therefore a terrorist, a nuisance. I went to the UK late last year and as I get off the gate and made my way to Immigration - I saw this 2 lines - One for EU passport holder and the other line was for Non-EU. So, being a Malaysian pasprt holder, I queued behind the non-EU line. I was second in line; a Malaysian lady was in front of me. There was an officer at the EU counter and another one at the non-EU counter. The guy on the non-EU counter did not even look at us. He kept calling "next" from the EU lines! After a few "next", the lady in front look at me in disgust. She did not say anything, but I can read her. I then stepped up to the officer and politely asked " Excuse me Sir, should we queue in that line? (pointing to the EU line).. He just said in a stern voice - " I will be with you in a moment". I kept my cool eventhough I am boiling inside. Finally, after the EU line was cleared, he called us. When it came to my turn, he questioned me on my purpose of visit. I told him I am there to do equipment inspection. What equipment and what inspection?, he asked. I said I am a specialist engineer and I do oil and gas metering inspection and testing. I test the meters to ensure it complies to international codes and specification. My job takes me round the world, I boasted intentionally. He then asked " Malaysia has good universities?" I dont know what I answered...he obviously thought people in Malaysia are living on trees!
Anak Pak Deris.

I could kill for those books! Used to buy cheap second hand classics and Malaya memorabilia from antique shops in Birkenhead and Norwich during my student days back in 1987-92. Nothing beats browsing through book shops!

There are lots more from where that came from.

Did you notice how they now man ( and woman, to be PC) the non-EU lanes with non-white officers. And they are more unfriendly and sometimes downright hostile than the whites.

For all these and other signs of bigotry and double standards from the West we still harbour their sycophants in Malaysia!

When will all the well-educated Malays remove the scale from their eyes?

Why didn't we meet then, from 1987-1992? Think of all the fun we could have rummaging through the second hand bookshops, Charity Shops, Rummage sales, and the Car Boots??

Happy to find another addict.

By the way those precious books were bought by Iain at a Car Boot. He got to them before I could. DARN!!! But he has such a good nose for such gema.

Gosh, that's a treasure trove you have there.

I love reading about pre- post-war malaya/singapore (which is why I read you). I wonder if Mr Morrison was the Times journalist who was killed in the Korean war. Said to be Han Suyin's lover, the hero Mark Eliott(?) in her semi-biographic book/film Love is a Many Splendid Thing. The timeline is just about right I think.

I knew your sight will be focused on the cameras, especially the Nikkormat.

I'm glad you're a 'fan' of post-WW2 Malaya/Singapore. I think it's a fascinating period.

That's an interesting piece of news about Ian Morrison and Han Suyin. She's quite a go-er eh? I think she married a Police Officer, can't remember his name.

You might be right about Morrison. He wrote this article in August 1950 and in another article about the Chinese in Malaya (by another Caucasian) he was referred to as the late Ian Morrison. And 1950 is the period of the Korean War.

Many thanks for the interesting information.

Thanks, puan, for your reply.

Last time I looked, Dr Han is still alive and well and living in Switzerland.
My youngest aunt, my Mak Su, once told me that she was treated by the good Dr Han in JB for some childhood ailment. If I remember what she told me, Han Suyin had a practice in S'pore and held clinics in JB. Maybe late 50's, early 60s.

When I have time later, I'm going to google the good doctor again.
But you are right about the husband. He was quite high up in the police force of British Malaya. They divorced.
You met her? Did u ask for an autograph? I've seen pictures of her and she looked good. And yes, from what I've read she was quite a go-er.
Regards,
Ribut (child of the late 70's who wishes for the gentler era).

I know just how you feel - for that kinder and gentler era.

Your aunt's contacts with Han Suyin are amazing.

No, I was too petrified to ask for her autograph.

Iain has just told me that he has a First Edition of Han Suyin's "And the Rain My Drink" which he bought for 20 pence at a Church Sale 30 years ago!

Those shoes will go very well with the "payung perempuan joget".

Those are kung fu shoes - for attacking nitwits who can only think of having a good time.

how big is the space under the stairs??!!! how many nitwits can go in there? hehehe..

I certainly could squeeze you and your 5 nincompoops into that cupboard.

It's about the size of the cupboard at Oxford Avenue - just narrower but higher. My sweet little Elyas can have the space at the top, next to demure little Anis.