﻿﻿
﻿
I love those old pictures and photographs of our people taken from those days when David Camoron's (not a spelling error) forefathers were ruling the roost in Malaya and Singapore.

Most of such illustrations and narratives convey the message of the superiority of the Caucasian masters.  This patronizing attitude is still alive and well today, albeit a little muted.  Modern writers like Anthony Burgess, Paul Theroux and quintessential WOGS like Naipaul do carry on with the tradition  of  contemptuous writing about the coloured people, especially the Malays.  There's a great deal of political and pecuniary capital to be made with this genre of writing.

Sadly our own people, so often enamoured with such authors,  fail to notice the lip-curling derision of  these wordsmiths.

However, since the great financial collapse of 2008, we can begin to see cracks in the make-up of the West.  It is a picture of the chickens coming home to roost - of hard times and dark days.

Since we got back in January I can't help but notice these changes  from the  roost in my room.

But this is just a drop in the ocean.  The real picture is quite dismal.

When our late friend Frank was Clerk of Works at the City Council he specialized in Health and Safety.  It was his job to ensure that there were two men at work whenever a ladder was being used.  While the first man is up the ladder the second must be holding it down.

Well, this is the BT man at work, all by himself. 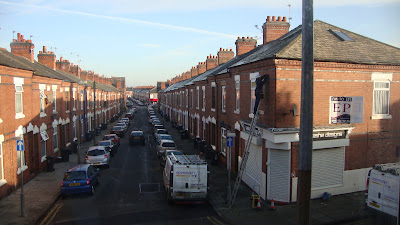 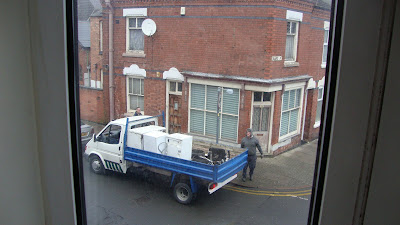 Over twenty five years of living in this first-world country﻿, and it is the first time I'm seeing this!  You can tell he's coming every morning when you hear the musical call from his lorry.  He keeps on trying.  He never gives up.  I have more respect for him and his mate than the elites running this country. 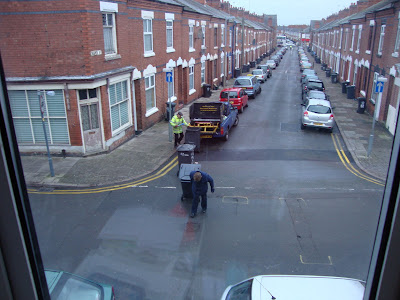 This old couple turn up every Wednesday morning after the bin-men have emptied the bins.   They drag the bins to their special  vehicle, give them a thorough wash and then pull them back to their rightful place.  You can see how the wife is bent over doing her task.  Why oh why should they, at this age, have to do this?  I can't begin to think how many bins they  clean up each day, how much dragging and pulling and how sore they must feel at the end of each working day.     And in this economic climate, how much longer will this indefatigable pair be able to survive? 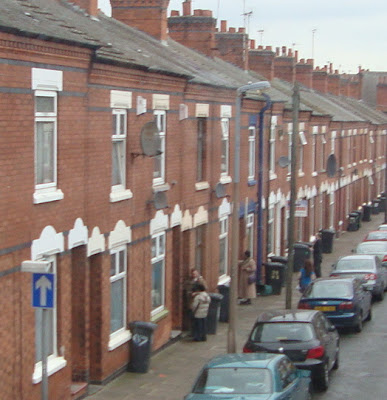 for here come the Evangelists - to seduce us with their offer to save our souls and their promise of a better kingdom than this benighted existence we now have.   Hallelujah!

And wait... There's even more light on the horizon.  There's the Wedding of Prince William and Katherine Middleton on 29 April.  We can all have a party. ﻿ There's hope for all the Cinderellas and Ugly Ducklings and Paupers in this nation.

My heart goes out to the couple washing the bins and the karang guni man.

And yet today i read in The independent:
£100 million cash boost for English waterways.

This is the weird thing about this country. As a tourist you will find beautiful landscapes, enchanting canals (re waterways), lovely gardens and flowers, but the poverty of the people remain invisible.
And today the news mentioned that Britain has the highest rate of stillbirths in Europe!!!

Sometime,
People see good things in us..
sometimes only the negatives..
may that be dependent on their personal bias or upbringing.
Appreciate what you have written here
(selalunya begitulah ;).

We were just saying at breakfast this morning about how sweet it would be if we don't have to live with the hypocrisy, bigotry and self-serving pronouncements of the politicians, the media, the academics and the arty-farties in this country.
Maybe we should try to be like Lunchai and just float down the stream on our pumpkin.
But we should be back with our cats next month and we'll see you then? InsyaAllah.

I love those folk sitting on the tangga so much that I have purloined it from your page.

Yes, patronising in 'praise'. I said that about the photo of Abdul Hadi that I use as my Awang Goneng logo. He was praised and patronised to the hilt by the writer who spotted him at some world fair, years ago.

Ditto for Burgess. I met the man once and went off him immediately. He did a documentary which saw his return to the MCKK and so he went on, in a why aren't these natives like the English sort of way. I find his books too sneering for my taste, famous though he is (was? well, he's dead now and his books are disappearing from the shops. Can't say the same for other famous dead writers). In his Trilogy, Malay kampungs are Kampung Lanchap, etc and Malaysian names are very crude too in a jokingly, insiderly I-know-you sort of way . I only like him for one story. An English speaking Malay gentleman once said to him, "Tuan Burgess, I like your English puns." He replied, "Saya pun!"

Thank you Purloiner, for the tale of Burgess.
When I was teaching in Brunei I met an elderly Eurasian lady who knew Burgess from those days when he was a teacher.

According to her, he faked his illness so that he can go home to the motherland without jeopardising his gratuity.

She also whispered to me about his fondness for boys and that he was not the only one out of the bunch of British teachers who migrated to Brunei from the Teachers Training Colleges in Malaya and the MCKK.

Reading this piece, i never thought that I can be inspired like this. Amazing! Your works are very credible enough.. Meanwhile. If you are interested and looking for
Curtain SingaporeFeel free to check and visit our site and look for our affordable items with a very nice quality. Thank you and Godbless!