The Art of Saying Sorry

Last week, my 14 year-old great-niece Nadia, mailed me her little story titled  "I'm sorry, Mum."  She realized she had not been a "responsible daughter and sister"  and this was her way of coming to terms with her shortcomings.

In the English language several words are available to show contrition:  words like sorry, apologize and excuse me.  It is generally agreed that saying sorry is an expression of regret while  an apology includes an admission of responsibility.

However,  the English language also has the facility to mix words of remorse with aggression.  For example : 'I'm sorry, but you cannot come in.'  But nowadays we hear  a lot of 'Excuse me?' to tell the other person 'You must be some kind of idiot!'

I can only think of two words in Malay for expressing regret - maaf  and  ampun.  The latter is usually used to indicate a strong feeling of compunction or something asked by an 'inferior' from a 'superior' when admitting culpability.

But we also have a 'conscience valve' in our culture where we can wipe off all the hurts we caused in the past year when, on Hari Raya, we ask for maaf zahir dan batin.  The reason for this practice is very laudable although at times it becomes a convenient cop-out clause for those who want to evade accountability for their transgressions and misdemeanours.

This brings me to the sorry state of putting right the wrongs.

Mr Tony Blair, then PM of Great Britain, expressed in November 2004 his 'deep sorrow' for Britain's role in the Slave Trade.  The Atlantic Slave Trade which lasted from 1440 - 1879 was one of the most shameful practices of Western civilization in their desire for profit in the New World. 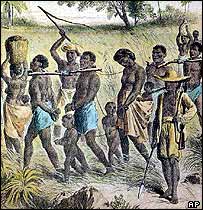 The Church of England was an accomplice in this trade.  The Church owned sugar plantations, such as the Codrington estates, worked by slaves.  There were bishops in the House of Lords who voted against the abolition of slavery in 1807.  Adam Hochschild, the author of "Bury the Chains" wrote that the "Church's missionary organization, the Society for the Propagation of the Gospel in Foreign Parts, branded its slaves on the chest with the word SOCIETY to show who they belonged to."

When you visit Liverpool (the city of the Beatles) or Bristol or Amsterdam, and admire their architectural splendour do remember that their wealth and growth were based almost entirely on trading black men from Africa to work as slaves on sugar and cotton plantations in the Caribbean and what is now the United States of America.  And when Slavery was ended in 1883, Parliament voted compensation to former slave owners rather than the slaves.  The Church received Sterling 8,823 which is about half a million pounds in today's money and the Bishop of Exeter and his associates received Sterling 13,000!!

And, the Anglican PM (now turned Catholic) Tony Blair could not bring himself to issue the full apology which admits responsibility on behalf of his culture, his country and their wealth.


Across the Atlantic pond, President Clinton, in May 1997 apologized formally to the victims of the Tuskegee experiment.

For forty years between 1932 and 1972, the U.S. Public Health Service (PHS) conducted an experiment on 399 black men in the late stages of syphilis.  These men, for the most part illiterate sharecroppers from one of the poorest counties in Alabama, were never told what disease they were suffering from or of its seriousness.  Informed that they were being treated for "bad blood", their doctors had no intention of curing them from syphilis at all.  The data for the experiment was to be collected from  autopsies of the men, and they were thus deliberately left to degenerate under the ravages of tertiary syphilis - which can include tumours, heart disease, paralysis, insanity, and death.  "As I see it," one of the doctors involved explained, "we have no further interest in these patients until they die."

A whistleblower from the PHS revealed this story and it came to light on July 25 1972 in the Washington Star in an article by Jean Heller.  It took 25 years before an apology was made by the President of the United States.  Perhaps it was no coincidence that Clinton was seeking a second term in office in 1997 and depended very much on black votes!!

Then on 1 October 2010 the USA "apologized for 'outrageous and abhorrent'
experiments in Guatemala by American doctors who infected hundreds of prisoners, soldiers and mental patients with syphilis in the 1940s."

This time an American Government led by a  partly white(?) or partly black(?)  American President made the gesture 13 years after Clinton's  remorse.

And now, more recently, and closer to home (though they are nowhere near as abominable as the above cases) we have two more examples of the art of "(not) saying sorry."

In June this year, Lim Kit Siang (LKS) made a faux pas by ticking off his host the Sabah Progressive Party (SAPP) for being unrealistic in not joining the opposition coalition front in the next general election.  LKS quickly sought to assuage the feelings of his SAPP comrades with this apology.

"If people think I was very harsh, that was not my intention.  I apologise."  In other words it's not his fault that they misinterpreted his intentions.  Just as the Tuskegee experiment's state health officer claimed that people were trying to 'make a mountain out of a molehill.'

Minister Mentor, now Emeritus Senior Minister Lee Kuan Yew (LKY) made a statement on 7 March 2011 regarding  a remark in his book "Hard Truths" about the failure of Singapore Malay-Muslims to integrate. 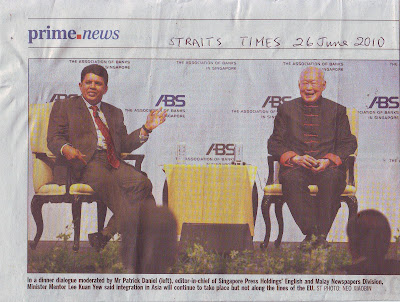 He said   "Hard Truths was a book based on 32 hours of interviews over a period of 2 years.  I made this one comment on the Muslims integrating with other communities probably 2 or 3 years ago.  Ministers and MPs, both Malay and non-Malay, have since told me that Singapore Malays have indeed made special efforts to integrate with the other communities, especially since 9/11, and that my call is out of date.  I stand corrected.  I hope that this trend will continue in the future."
(The Straits Times March 8 2011)

LKY does not do sorry or accept sorry except in a libel case.  The imperious "I stand corrected" only implied that his statement about the Malays was not really wrong.   It was just 'out of date'.  In other words, before 9/11 the Malays made no 'special efforts' to integrate.   Excuse me?   I thought they have been doing just that since 1819!!

Now that LKY has been brought 'up to date' by the men at the top, he looks forward to this trend continuing.    Aaaahh, a pat on the head for all Singaporean Malay-Muslims: carry on with the special effort - and continue being a good and and obedient community.

Here endeth the lesson on "How not to say sorry".

Honesty is a good
thing but
it is not profitable to
its possessor
unless it is
kept under control.
(Don Marquis  1878-1937)
Posted by anak si-hamid at Thursday, June 30, 2011

Thank you for posting a very informative (tuition;)) on the art.. Always found your writing educational if not inspiring :)

Thank you Wan Sharif for your supportive comments.

This posting is just me donning my teacher's hat and I absolutely detest hypocrisy!