In the Name of Holy / Holey Charity

My desk-top computer collapsed completely a week ago. My brother had a tough time trying to retrieve the backup but a visit to Low Yat saved my skin or rather the computer's.

Going through what had been 'saved' brought me to this posting.

These beautiful children from the poorest parts of the globe are being put up for adoption. This includes the appropriation of their souls as well in the case of this Christian Compassion Charity.

For US$38 per child (tax-deductible), your adopted one will be connected with "a loving, church-based child sponsorship programme". Other than food, water, education and medical care - "Most important of all, your sponsored child will hear about Jesus Christ and be encouraged to develop a lifelong relationship with God".

I could suggest another country where these soul-snatchers could ply their trade.

Yahoo News UK revealed in October 2010 that in UK, nearly three in ten seven-year-olds are living in poverty. 20% of the children are "living in such poverty that their family's income is less than 50% of the average family's weekly income".

But such Compassion to these children will not be tolerated and there's not much cache in harvesting the souls of children from the West.

Remember the old saying? The road to hell is paved with good intentions. But the intentions of this Charity reek with the odour of self-serving righteousness.

ON THE OTHER HAND:
If religious-based do-gooders turn you off, you can always divert your good heart and wallet to adopting an Orangutan instead.

You can select what you please from

However she suffers a terrible malady. "Treated as a human while being with her 'owners', it will be difficult for her to adapt to life in the forest".

I discovered some fascinating aspects of 'bringing up' adopted orangutans.

1.Diaper them from day one. Why? To keep your floors clean.
2.Feed them a non-soy formula because some believe that soy causes aggression in adults. Bang goes Darwin's Theory of Evolution. As far as I know soy is marvellous for us human primates. And it's especially good for women to ward off menopausal problems.
Also sambal pedas tahu and tempeh is one of our top favourites. But maybe that's why I'm so bolshie and bloody-minded?
3.Give them biscuits as a snack or a treat. Hmmmh - The spouse also enjoys this for his elevenses.
4.Baby orangutans love stuffed animals. Which animals, I wonder?

Both Charities apply the same gambits for extracting the milk of human kindness. Christian Compassion offers this.

"Receive a free Compassion scrapbook when ....you make your first payment. This scrapbook will serve as a handy way to organize the photos and letters that you receive from your sponsored child.
When you sponsor a child, you are linked with one particular child who will know your name, write to you, and TREASURE the thought that you care. He or she will pray for you often and write to you.
......you'll receive your child's photo, personal story".

What are we doing to our suffering children and animals?

FOR CHARITY WILL HARDLY WATER THE GROUND WHERE IT MUST FIRST FILL A POND. (Francis Bacon 1561-1626)

P.S. I have a habit of scribbling on bits and pieces of paper what I consider to be telling and fascinating ideas that I see on TV and hear on the Radio. This I wrote about 15 or so years ago in my kitchen note-book. So I must have heard this over the radio while I was cooking at Oxford Avenue, Leicester. 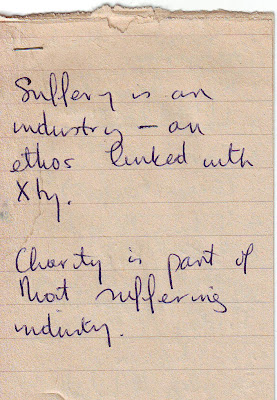