I had planned a posting about matches but the happenings on Friday, Vesak Day compelled me to write this instead.

Once upon a time, in this piece of Kuala Lumpur suburbia there was this beautiful mango tree. 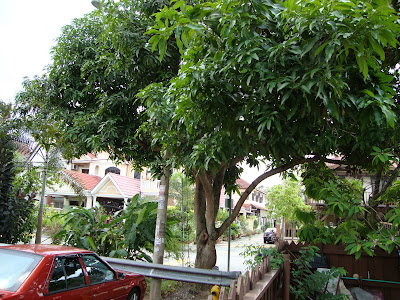 It was planted by a neighbour about 15 years ago and it is now such a healthy tree that almost one-third of its top overhangs our garden. This tree, for the past two years had been providing a bounty of fruits for many humans in this residential area but most crucial for us, it gave succour to the civets who had been driven out of their habitat by the growth of houses, condominiums, shopping centres and car parks in this neighbourhood.

Only last year, DBKL (Kuala Lumpur City Council) came along with their lorry and crane to cut down the mango tree. The man-in-charge came to our gate and asked me to sign the letter of acknowledgement. I was perplexed and when it dawned on me that I was being framed, I was furious. There was quite a brouhaha when the 'owner' of the tree and several other indignant ladies told off those poor blokes from DBKL. They knew who was responsible: a certain Datin nearby, a newcomer. What a soap opera - right on our doorstep.

On Vesak Day, Osman and Aisha came to our house with a lorry from their kampung to take away or rather, to recycle their collection of discards from the nouveau riche residents who are obsessed with renovating their houses. O&A had accumulated solid window frames, bags of clothes, household goods and boxes stuffed full with plastic bags. According to Aisha, the people in her kampung, just outside of Kampar, would find these bags useful. Also, when she and her husband are finished with working as road sweepers in the BIG MANGO that is Kuala Lumpur, she hopes to set up a food stall in the kampung and her plastic bags would come in handy, so she says. Aisha is basically a magpie, just like me.
Now all these worldly collection of O&A were kept on our verandah.

About eight months ago, an unknown resident complained about the two of them storing their brooms and sacks on the grassy tracks adjoining the houses - even though these were well camouflaged behind some thick bushy plants. So we gave them a corner of our garden for their storage space. Most recently, again because of another complaint, they were told by their Supervisor that they cannot rest or eat on the same grassy verge. Although we offerred them our verandah, these two plucky souls refused to give up their cool and shady resting place.

How do all these reflect on the Malay arriviste , on Malay budi-bahasa (courtesy), or the spirit of the Ummah?

So, as Osman and Aisha and their nephews were busy with their move, the husband of the 'owner' of the mango tree came along and brought down with the aid of a long pole some clusters of mango from the part of the tree that were overhanging our garden. We have always allowed anyone - when they asked for permission (or even turn a blind eye) - to get at these mangoes because it is not our tree and even if it is, there's enough for sharing.

But our Pendekar Mangga (Mango Warrior) took the opportuniy of the wide open gate to bulldoze his way into our garden without as much as a Salam or an 'excuse me' to pick up his fallen fruits. He then boldly and haughtily walked out with his pickings. Iain and I looked on with utter disbelief!

Often, - during my nearly 20years of living in Leicester - I grumbled to the spouse about the uncivilized attitude and behaviour of the mat salleh (a slang and sometimes a derogatory word for the white man). We have been in this Malay middle-class enclave for hardly 3 years and we have observed and experienced some weird (at the least) and odious (at the worst) neanderthal behaviour.

AND our Panglima Mangga had carried out this 'raid' just after his Friday prayers, dressed in his Friday best of a crisp and clean baju Melayu, sarung and a kopiak.

i hear the Datin Ridset is now also known as Datin Sapu Lidi ??

ph,
Heve you been reading my diary?

After reading about the Pangila Mangga, this Hokkein saying comes to my mind,"chi mi boh kia cheng" which literally means, the blind is not afraid of the gun.

It would be good if the cats could be trained to SHIT in their datin shit's garden !

Thank you Wan Sharif,
Diplomacy and lots and lots of sabah are required for old people like us to deal with the younger 'arrivistes.'

Helas,
Thank you. If you want any mangga, don't come near this tree. Wait until AsH's tree in the backyard begins to fruit.

Next time do hv ur video camera on standby. Would b nice to post his 'silat' in youtube...

Thank you Azan,
I think I may have to learn the silat! Pretty tough area this.
I like the Panglims 4D. He doesn't hedge his bets, does he?

Dear Raden Rohaya Lopez,
Thank you for the sisterly support. I thought at 60plus, life in the midst of my brethren would be nice and stress-free.

Then there will be bigger helpings of mangoes on the ground for the higher class animals like the civets.

Dear Mr Bojangles,
You're a man after my own heart. Your priorities and mine are exactly the same.
If I do as you suggest, I will have to get an elephant gun - to pierce the thick skin.

Such a greedy neighbour!His wife must be craving day n night for the mangoes!

Thank you wawa,
I can see it's going to be a big harvest this year.
All cravers are welcome, at least on our side of the garden..... as long as they are not too craven to be courteous.