Mrs G.P. Darke was my Girl Guide Captain when I was in Crescent Girls' School. She came to visit me and the family at our kampung house - partly to ask my father's permission for me to attend a Thinking Day service, in honour of Lord Baden-Powell's birthday on the 22nd of February at St Andrew's Cathedral.
She brought us this 'buah tangan' (literally, fruit of the hand) of a tin of Cadburys Milk Tray Chocolates!! 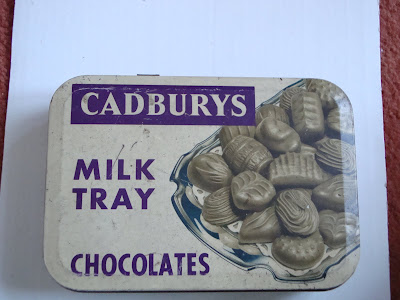 Can you imagine my joy! A whole tin of chocolates! In those days (1958/1959?), we couldn't begin to imagine the luxury of touching a piece of Cadburys chocolate, much less consuming even a tiny morsel. Kacang putih and kacang rebus (types of roasted and boiled peas/nuts) wrapped in newspaper cones- yes! But chocolates? Never ever. It was so special for me that I kept this tin all these years to store my little treasures.
So we both attended the service at St. Andrew's Cathedral. I was nervous to be in this huge and formidable structure but Mrs Darke was good company and she made sure I followed the routine.
I was so grateful to my broadminded Abah for allowing me (and Mrs Darke) to undertake what could be regarded in those days, and now, as a chancey thing to do. Then and today, such trusts can be misplaced and abused. There's always the old English proverb of 'beware the Greek bearing gifts' and our own equivalent of the 'udang di sebalik batu'. It is sad that one has to be suspicious of kindnesses and gifts pressed upon one but in our part of the world and even here in England for a foreigner like me, it is better to be safe than sorry.
Attempts to evangelize young and especially educated Muslims have been around since my school days and maybe even further back since the imperialism of the Portuguese, the Dutch and the British. Today however, the process has become more corporatised, more perfidious and persuasive.
Although my Sixth Form History teacher Miss Then attempted to seduce me into her faith with her books and her smiles - it cut no ice with me. Thank goodness I was an unrepentant teenage hedonist then!
But any teenager at that time of life would have a lot of questions to ask of the present and the future, of having and concealing so many fears and uncertainties as to what life is all about. I wrote a letter to Mrs. Darke about some of my questions. It's no disparagement to my wonderful parents, but sometimes it is easier to talk with non-family members. Mrs. Darke replied and she was very down-to-earth, understanding and non-judgemental. As to my query about religion she simply wrote (non-verbatim), "Go and read and learn more about your faith. A religion is more than just rituals. Give Islam a chance."
Years and years later, a student of mine posed a similar question to me about his Hindu faith. I gave him Mrs. Darke's advice. "Read, and give your religion a chance".
I am glad that I did not consult Miss Then about my queries. I would be like the fly entering the spider's web! I am also pleased that this student of mine decided to talk to this eccentric and strict teacher and not to his very sweet Primary School teacher who had invited him and his classmates to her house for drinks and cakes and an introduction to Jesus and the Good News. 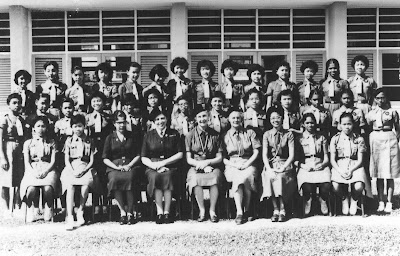 Mrs Darke is fourth from the left in the Front Row and chubby sapling AsH is third to her right - on the edge as usual.

Appendix:
To Jooli,
I wished I had joined USM earlier - just for the chance to know you and torment you!!
Posted by anak si-hamid at Monday, February 15, 2010

I too was a Guide, cycling once (or twice) a week to the 'Guider's' house in Telok Sisek, Kuantan, from our house in Jln Dato' Lim Hoe Lek, about 5 km away. Our guider was Mdm Zaleha, Yasmin Yusof's mum. I guess I joined the Guides partly because I was interested, but also because I was in awe of her, being orang putih and all.

Ha ha ha (to the appendix).