Remember that 1996 movie "Executive Decision" about the hijacking of a 747 jetliner by Islamic terrorists? We were watching it on the video in the Express Bus from Kuala Lumpur to Batu Pahat. However we were more fascinated by an elderly Hajjah sitting just a couple of seats in front of us. She was quite hypnotized watching this American movie peppered with shoutings of Allahu Akbar. I cannot imagine what was going on in her mind.
Well, that was not the first or the last of Hollywood movies that capitalise on demonizing and mocking Islam for political and pecuniary purposes.
Let's put the shoe on the other foot and listen to this.

The above is a hymn, an invisible inspiration at the core of Western politics and policies - from Imperialism to the War on Terror.

As to the War on Terror in Iraq, Afghanistan, and of course Guantanamo Bay, Norman Solomon has this 'Orwellian Logic 101 - A few simple lessons' - to contribute.
"When they put bombs in cars and kill people, they're uncivilized killers. When we put bombs on missiles and kill people, we're upholding civilized values. When they kill, they're terrorists. When we kill, we're striking against terror." 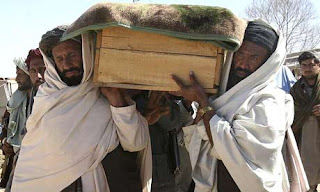 Photograph : Alauddin Khani/AP
This is how a terrorist is buried. He's an insurgent, a killer. 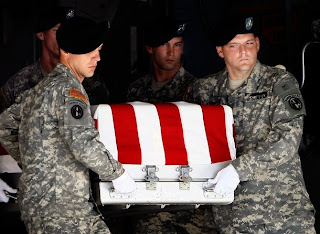 This shows a hero. He's a warrior, he died defending our freedom.

Two nights ago, Channel 4 News revealed the compensation given by the British MOD (Ministry of Defence) to civilians killed in Afghanistan as a result of their 'tactics'. Firstly it involves a long drawn out process for the relatives concerned. Secondly they have a tough job to prove that they are 'genuine' victims. 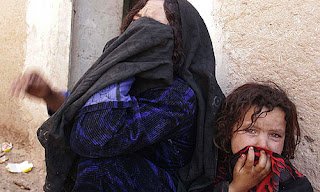 Photograph: Fraidoon Pooyaa/AP
An Afghani woman and child terrorised out of their minds.

We were informed by Channel 4 News that the MOD gave a compensation of USD210(MYR 741) for an Afghani mother killed by British firepower.
How much is a Muslim woman worth - alive or dead - compared to a Judaeo-Christian woman?
Will she be less worthless had she discarded her burqa and her hijab?
Will there be a bonus value on her if she emulates the norms and mores of the West like President Sarkozy's glamorous wife?

We are all culpable : for hiding our heads in the sand.

There is no doubt that US government is one of the biggest terrorist in the world. Its just that they try to find every single reason to justify what they have done. But sooner or later, I believe they'll receive their judgement..

Thank you Sicko for your comment.
All the more we have to learn - not from them, but about them.