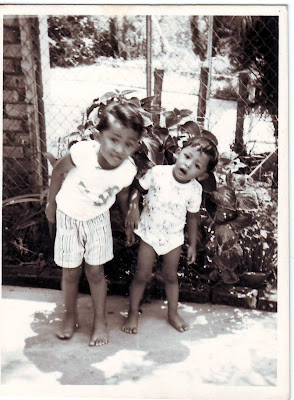 Hisham and Mahzan - many moons ago


Got back from 5 days in Penang two days ago and now off to Singapore tomorrow to undertake a task that is too painful even to contemplate - for the exhumation and reburial of my father Abdul Hamid and his son Mustakim because their grave plots are to be recycled for the next 'generation'.
And so I have to pick on you 'Zan to give me a little levity and levitation of my spirit. You, after all, were the one who nagged me into starting this blog and pushing us into the latter end of the 20th century. I know I have arrived into the 21st century when I can stop calling the thumbdrive a thumbprint, when I can remember how to create electronic folders and 'roaming' is not a great big walkabout by adventurous folks. And I have done a lot of roaming without the company of a mobile phone.
Why the Leap Year Lert? Years ago, in Leicester, when Unc and I were returning from the shops, we saw a sticker on this car : BE ALERT. BRITAIN NEEDS MORE LERTS ! As you are our favourite lert, you deserve this posting, or pasting? You were born on the 29th of February and each year you try to remind us about your birthday but for 3 out of 4 wistful attempts we just ignored you.
Last year, I wrote this for you.
Today the 29th of February is Mahzan's birthday - and he is reminded of his increasing age only once in 4 years. I find it hard at times to see him as a father of three, because he somehow remains the little (horrible) boy who loves to collect stones and pebbles to store under his pillow, away from his mother's eagle eyes. He collects broken down clocks or clocks broken by him, mostly from my mother's collection, which he then strips down to the barest wire and springs.
But he was also the one who sat with me in the taxi from Batu Pahat to Singapore , after picking him up at SDAR in Seremban to attend his Ucu's funeral on 21 Sept 1982. In a calm and composed way he asked, "What did Ucu die of?" I said 'asthma' and from my agonised and grief- stricken self, I added. "Zan, I hope one day you will be a doctor and be of help to people like Ucu."
This I said to to the little boy who loved fiddling with anything mechanical, who wanted to be an engineer. He was only 14 then, I was 38 and his Ucu died at 33. Today, he's a doctor and a helluva good one too, very caring and with wonderful bedside manners.
He has Akim's dry and ironic sense of humour. When he is expected to do jobs he doesn't want to do he "make don't know" - only Mahzan can construct mangled translation from "buat ta' tahu". He enjoys playing games with his kids and his nephews and nieces. I last heard of him giving riddles to the kids like "What is the biggest 'jam' (clock in Malay) in the world? After a few seconds of puzzled silence ; he answered "jamban" (toilet). Of course he was pelted with furious attacks by tiny hands, but that's Mahzan. Silly Boy, I say.
This lertish tendency I can see in his son, Muhammad Adam aged 4. We were on our way to dinner some time ago when we were staying with his family in Johor Bharu. I made some remarks about the moon; like blue moon, full moon and half moon. Then Adam chipped in and yelled "timun!". Another SILLY BOY, third generation !!!
Thanks for the memories 'Zan and have a happy birthday in 2012.

PS The budding Lert is the one on the right.

I'm so glad we have finally found you and Uncle Ian! Thank goodness for the review of 'Fatimah's Kampung' that led me to your blog. Congratulations to both of you, finally the book is published. We want a copy definitely. We miss you and Uncle Ian and when we're marching through the streets in London during one of anti-Israel demos, we thought of you both. Please let's stay in touch!

wah lau eh...kena arrow!!
thank you - thank you for the nice words.
btw, what's Lert? :0
Searched cambridge online, merriam webster online, thesaurus etc can't find the meaning. I can only think of it as the opposite of 'Alert'..which exactly explain my state nowadays.
I've got 3 imp mtgs(minutes are taken but hours are lost) today, & will try to join you in the afternoon (no promise).

http://www.urbandictionary.com/define.php?term=lert
I hope its the first option!!

Do not believe everything that you read on the blog - especially when it comes to this person! Ha Ha Ha!

One of the sister - the other one! And for this one I shall remain anonymous!

Oh dear, I think I have started a fratricidal war.
Hip hip hooray !

But you girls must admit he looked so cute - then. Now, only Sabrina can adore him! Bless her.

one glance I know which sister is this mak anon!!

the one who makes mini earthquakes on weekends, right?!