Jackie and Julia. Episode 2 : The Magnificent Seven coasting along on the East Coast of Semenanjung Malaysia.


Do you remember the movie "The Magnificent  Seven"?    Well, it was recreated in the adventures of the characters below.


I know,I know, I can count only up to six on my ten fingers.  There's a good explanation for the miscount.

On the far left is Iain, the aircon engineer who fiddled around with the car's cooling system and left us ladies at the rear fuming with perspiration.  (Ladies perspire, only horses sweat!).  But he is a fantastic beverage manager.  During his stint he must have made loads of mugs of tea - maybe 24 mugs a day.

Next to him is his batty wife (somewhat like Nora Batty in "The Last of the Summer Wine" series).  She  runs a tight ship.  She takes charge of the comestibles while they're on the move and also manages to keep a tight leash on her man - ever watchful whenever his hand touches the aircon controls.

Sitting all by himself in the middle, is Nulan.  He is the youngest in the group.  As he is just a sprightly forty-niner you can guess that the others are all way over the hill, but not so with Jackie and Julia.  Some of my former students are much older than them.

Nulan is the epitome of Magnificent - he holds the rank of two (plus) characters and thus turns this motley crowd of six into seven.   He is the pilot, the window engineer (his pieces of tape were always very handy), the travel guide, the gourmet and food chaperone - and he also works part- time as a tutor in the art of unconstrained mental and physical exercise. Here is his recommended gymnastic approach to relaxing after driving around in a car full of an elderly bunch of 1 Mat Salleh, 2 Minah Sallehs and one MOG (Malay/Miserable ole git).


Jackie is to the left of Nulan.  She is our Resident Polyanna, ever so positive and lively and has a wonderful habit of clearing up the untidy mess that the others leave behind, all done with a lot of smile and good cheer.  On her first sight of a beach on the East Coast (somewhere near Kuantan), and on dipping her feet into the water; .....


...... she exclaimed  "The water's warm, it's lovely and warm"!  Well, this almost turned that sunny disposition to sultry hot.

Som is the sixth member of this Magnificent mob.  He is our good friend and our frequent lunch-companion in Kuala Lumpur.  He is also the Squire of this beautiful beach house, Che Beach House (CBH), located at Marang, just south of Kuala Terengganu.  Jackie and Julia were impressed by the images of CBH on the website and they were not disappointed with what they got on the ground.


Magnificent belle number seven is Julia.  She has taken on the task of being the lookout lass for cows (an animal she's very familiar with because of her farming background), monkeys, monitor lizards, creepy crawlies and sharks/whales.  Also because she's very handy with tractors on the farm she's very interested in Nulan's mechanical and DIY skills.


But this I could not resist.


But Julia did not give up on her search for the local non-homo sapiens.

Top Right - With her plucky camera woman, they are seen scouting for creepy crawlies on the beach on a lovely sunny morning at CBH.

Bottom Right - Then at Teluk Chempedak we saw this blob (circled in the picture) that seemed to be moving.  We gasped!  Could it be .....?  Shall we call on Nulan to give us his expert opinion.   But he was too deeply engrossed  chin-wagging  with his air-con engineer .......

Lucky for us he was otherwise occupied.  What we observed was just a small rock sitting in the sea with the waves lapping around it. Ooooh we must have turned red in the face - actually only Jackie and Julia.  AsH's brown face cannot turn red - just darker brown.

Bottom Left - What 's this?  A little Malaysian panther?  No, you ninnies - that's Jackie's and Julia's Minx, their beloved cat left behind in a Leicester cattery.

Top Left - At last!!  Julia the farmer's daughter and ex-farmer got to see her cows - in Terengganu. They were grazing at the front gate of CBH.  According to Julia, one looked almost Friesian.  Jackie had to dash across the road just to capture this snap - she's a really dashing photographer.  In fact most of the photos in this posting came from her collection.  After this jubilant experience there were no more laments of  "Where are the cows"?

Well, that's a pretty informative introduction to The Magnificent Seven in Terengganu.  The sequel will follow in Episode 3.

Episode 3 will explain and elaborate on the background of these next two pictures. 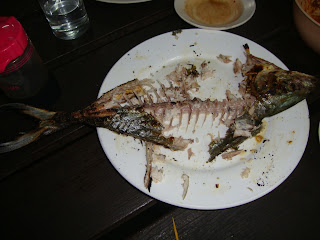 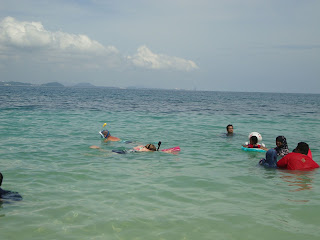 These photos were taken by AsH - who has an eye for  really good scoops.