Tears and Fears and Dirty Water

I have not and I do not think I shall ever get over the hate and bigotry that murdered this little three year old Mucaad Ibrahim on 15 March 2019 in Christchurch.   He was shot twice by an Australian white supremacist Brenton Tarrant :  the first when he was on his father's lap in the Al Noor Mosque  and the second time in the head when he was separated from his father, calling out "Daddy, Daddy"!


During his funeral, little Mucaad "was carried aloft in a shroud - almost weightless", wrote the reporter from New Zealand Herald.


How do you fathom the images and trauma in this survivor's soul and being? 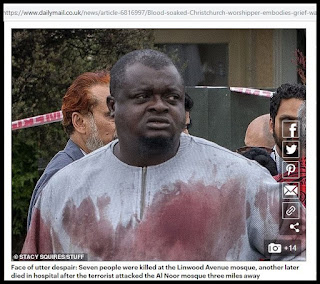 The victims and survivors of that massacre in Christchurch were all Immigrants: from Palestine, Egypt, India, Pakistan, Syria, Libya, Iraq and several other Muslim countries torn apart by war and poverty;  who had hoped for a better life in New Zealand.  But it was not to be.

There are other immigrants too, from another time and another country who sought and were given refuge and succour in a foreign land far away from their motherland.

They not only survived but also prospered enormously.   See Video below on the 10 richest people in Malaysia- January 2019 - all the sons of Mr Chiak Boh Liau.


If only those immigrants at Christchurch were as lucky as these.

The claim to victim-hood has become one of this century's foremost fads.  Every one demands the right to be victims of oppression, bullying, persecution, exploitation and discrimination.  Forget about being heroic which involves being courageous, unselfish and gallant and true.

50 people were viciously murdered at prayer -'victims nonpareil' - by an ideology that is no different from that which created The Holocaust of the Second World War.

So I was quite amused to read about our 'Made in Malaysia' victims of oppression, discrimination. persecution etc etc being given so much publicity and succour from the Press and even a Minister!   All these Little Corporals , all these pathetic "cry babies"  how well they grow in Malaysia Baru.