Many, many yonks ago the newspapers inserted a little competition to promote their sales.  It was called Spot the Ball Contest.  The picture of a ball had been removed from a photograph of a football match.  All you had to do to win a prize was to locate the position  of the ball.

Now, on browsing through today's The Independent I noticed this headline :


My heart sank.  Trump's acknowledgement of the Zionists' and Christian Zionists'  appetite and prayers for acquiring Jerusalem had angered, understandably, the Palestinians.  But
this 'attack' on the Patriarch of the Greek Orthodox Church would not help their cause!!

So I clicked the item and this was the headline in the article written by Ali Sawafta and Nidal Almughrabi from Reuters.

In the eyes of the world,  Palestinians mean Muslims.  Palestinian Muslims are a violent lot of terrorists - like the 16 year old girl Ahed Tamimi who slapped an armed Israeli soldier just last week.

So, on the face of it, a headline like that suggests a certain very predictable chain reaction from the guardians of Christianity?  I am thinking of leading lights like ....


That would certainly be the scenario if one only read the headline.  What is the purpose of a newspaper Headline? It is mainly to catch the attention of the readers.  It is also supposed to present the gist and the main thrust of the text to follow.

But this headline has failed miserably, whether by commission or omission  BECAUSE this is the actual content of the report  ...... 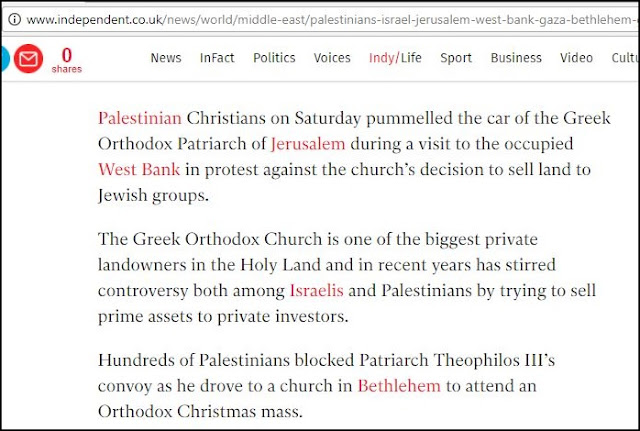 ...... that the "attack" was carried out by Christian Palestinians ( and with justification)!

The missing "ball", the missing word is Christian.

This is not simply a matter of distinguishing a religious denomination.  If  a Malaysian commits a crime abroad it does not matter if that person is Chinese or Malay or Indian, or Muslim or Christian or Hindu or Buddhist - he is just another Malaysian, albeit a nasty piece of work who has brought shame to the country.
,
But in Palestine, the cradle of three monotheist religions and a killing field where the powerful perpetrators are labelled the victims (with the collaboration of an omnipotent Big Brother abroad), where blood and tears are cheap especially for the Palestinians -  religion matters especially in a world where violence is always attributed to one particular religion; to Islam.