Three days ago we read about the grand finale in the career of a British Asian icon.     He is the Rt. Hon Nigel Keith Anthony Standish Vaz, the Labour MP for Leicester East since 1987 - who holds the record for being the longest serving British Asian MP.     I say he is a Leicester MP; he actually spends most of his time in London, where he owns properties worth around £3 million. 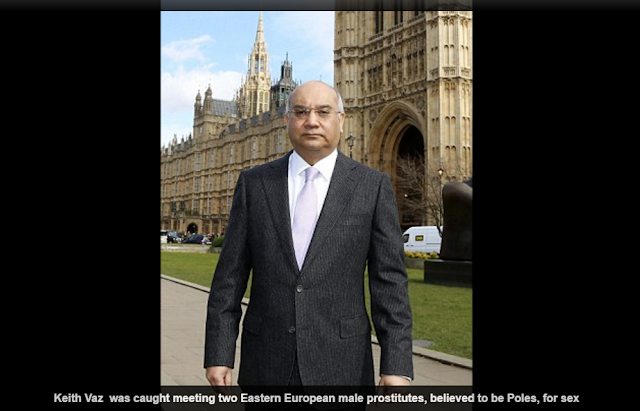 He was exposed in a sting operation by the Sunday Mirror just a few days ago.  It was a beautifully organised operation - no need for a trial or the presence of mattresses.

I suppose he has a right to his private life ( he is a married man of 23 years and has sired 2 children) but as someone elected and trusted by the good people (mainly traditional Asians) of Leicester East to represent them, and as a member of the Privy Council (since 2006) and (since 2007) the Chairman of the Home Affairs Select Committee  he is expected to be whiter than white in upholding the integrity of Parliament, his country and his community.


But who knows?     Time and tide, opportunity and opportunism might see the reconciliation of Vaz and the Sunday Mirror?     Politics and media have that kind of relationship.

They can always take a leaf from Malaysia's book and kiss and make up like ........ 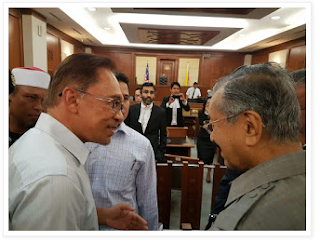 Oh, wouldn't it be loverly -  " lots of chocolate for me to eat, lots of coal making lots of heat".

Who knows -  in the spirit of Malaysia's example as the Mother of all Reconciliations - we might witness a similar scenario: that of future President Hilary Clinton (she has a good chance) smiling and hugging Monica Lewinsky.   Who's Monica Lewinsky?    Well, her dress almost brought down the world's most powerful leader - husband Bill.


I could think of other mind-boggling rapprochements - like Hang Jebat and Hang Tuah. But no, they were battling for principles.

Let's just remember, when we see old friends, turned old enemies, turned friends once again: there is not always a worthwhile principle at stake.   Especially when they're all politicians.

Three cheers for Malaysia - Land of Opportunity and Opportunists!

All were for principles, I doubt not. But remember Monica And Bill were in it all gallant-hearted. After all which giggling sultry intern wouldn't heed the call of a beckoning POTUS, especially when the latter convinces her that he has ... errr, a job, for her to do?

Its a std procedure...arch enemies soros forgiven, anwar forgiven....so njb just wait for his turn, just get ready with lots of tissue boxes for lots of tears of joys and dramas....

Don't worry. We are all safe.

After all, Najib is still the most important Malay leader we have ever had. He'll still be up there despite all the reconciliations and what not that you have among the rejects of Malay society.

And after Najib, we'll all have Zahid Hamid PhD and/or Hishamuddin Hussain Onn, scion of one of the most illustrious Turko-Malay families in the land.

Salams ASH,
I remember Keith Vaz being there when my kids were babies. What a way to go eh? Hmmm...happens everywhere, human beings are without their faults, politicians included.
Mahathir needs to rest and spend his remaining years with his family, especially the long suffering wife...time to really pass the baton ..truly.
A belated Selamat Hari Raya Aidil Adha to you and spouse. By the way, do you know that theres a new Inclusive Mosque in London now? This time round the imam was a male and the sermon was abt the Haj. They believe in female leading the congregational prayers and males and females offering the solat side by side and welcome gays and lesbians. Personally, I would be most uncomfortable offering my prayers shoulder to shoulder with guys. Its bad enough standing under a guys armpit in a packed train ).
I think its not inclusive, more divisive by the looks of it. As far as I know, Regents Park Mosque or any other mosques have always welcomed Muslims to offer their prayers in their premises... gays, lesbians, transvestites, whatever.