AsH will be going home from home in a few days' time.  Here's my mental preparation for the return to a hothouse - weatherwise and political.

When the prospects for the future of my Tanah Air seem so gruesome, perhaps I need to look back - to what we were like - or rather, how we were portrayed - way back in 1839.  In fact, the Malays were never really in charge of their own fate and their future.  But certainly, looking back to my experience of 70 years, we are masters of shooting ourselves in the foot and stabbing each other in the back.

According to this encyclopaedia the 'mental powers (of the Malays ) are little developed'.  Look through the old books referring to the Malays and you'll find no end of negative comments about our mental and economic prowess.  In a way it has become a self-fulfilling prophecy that has landed the Malays in their present state of disunity and cretinous infighting.

However the element of bodoh-sombong cannot be discounted.  Also some of our prominent politicians have also shamelessly added another factor : that of 'shame' for which only the Malays are guilty of. I suppose, in this post I can be accused of the same malfeasance for exposing our 'pekong di dada'.

When Humpty Dumpty fell from the wall, "All the King's horses and all the King's men couldn't put Humpty together again".  Is there a lesson to be learned from this nursery rhyme?

Perhaps we can pick up more tips from the fables of Aesop - which we old-fashioned ex-teachers would resort to - in attempting to teach morality to our young ones.

2.  Politicians have a knack of making promises and trying to please all just to attain their place in the halls of power.  One who works without principles and manages to eat his cake and keep it, will end up like this.

3.  What motivates the policies of those who are power-hungry?

4.  What is the price of disunity and greed?


5.  As for the rakyat who inevitably become  cannon fodder in the battle of the Caesars, take heed of this tale. 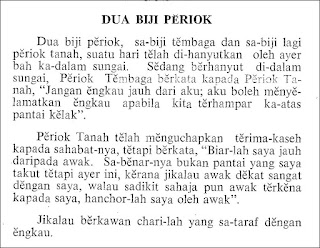 Equality is what the elite -  made up of the articulate and powerful and rich - promise to the dispossessed!!

For all confused, jaded and outraged Malaysians - as we have to make choices (or should we?) - think of P. Ramlee's lines.

It usually ends up in deciding between ...

And in another room, in the background is the kingpin counting his money:

As usual, Mam, you dish out very interesting parables and anecdotes.

How very justifiable and appropriate.

That's why yours is one of my favourite blogs.

I am sure many others also share my sentiments.

We need more of the good stuff from you.

I just wish the powers-that-be are also reading this.

Meanwhile, have a good day.

Thank you for the bouquet. Glad you enjoyed the posting.