I shall begin with an apology.  We old geezers are prone to repeating ourselves; with our stories and experiences.  We are inclined to slide into reminiscences, beginning with "Aaah, I remember the time when I  ... blah, blah, blah ........." and we fail to see the faces with their eyes rolled up and the silent voices saying, "Here we go again."

However, it's not my intention to foist upon my readers the tales of past times and old writings.

The trouble is, man's bigotry and ignorance tend to echo the sins and stupidity of their forefathers ; from one generation to the next.  And so you get the same old replay - with the codgers and the whippersnappers, the eminences and the hoi polloi at loggerheads over the same old bile and prejudices.

The case of Cameron is a re-run of the old scenario, with the younger regurgitating their foréfathers' contempt of others not of their ilk, and spouting the same cultural and political bigotry.   Old wine in new bottles.

For this part of the AAF (Anglo-American Fetish) I cannot add any new revelation about the mouthings of the present  PM of Great Britain.   They will be merely repetitions and extensions of the old Islamophobe chestnut that his progenitors expounded on. There is, for example, the legacy of their hero and national pride like Sir Winston Churchill.

In his 1899 book 'The River War" relating to the British war in Sudan Churchill had this to say :

There's also the four times British Prime Minister William Gladstone (1809-1898) who called the Quran an  "accursed book" and held it up during a session in Parliament, saying: " So long as there is this book there will be no peace in the world."

I suppose one could find excuses for such contempt:  those were different times, an era when white Christian Britannia ruled the waves.  We cannot expect them to know better!

We are well aware of  right-wing extremists in UK like the BNP and others.


And this list is only partial - think, for example, of LibertyGB and the English Defence League.     Such groups may be variously categorized as nationalists, far-right, white supremacists, hard-right, radical right, fascist right, ultra-right, xenophobic - and they target (so the pundits say) foreigners, coloureds, blacks and Jews.

We are bombarded with terms like Islamists, jihadists, Muslim extremists, Islamo-fascists in the print and electronic media.  However the label religious/Christianist Extremists hardly ever sticks to  white (and non-white) Christian affiliated  groups - Anders Brevik, for example, and the Klu Klux Klan are merely lone rangers and aberrations of white/Christian culture.  Christianity is likewise absolved of ungodly practices like slavery, the Holocaust, apartheid and imperialism.

Feed your eyes on these images of the Right Wing Christian Extremists "Britain First". 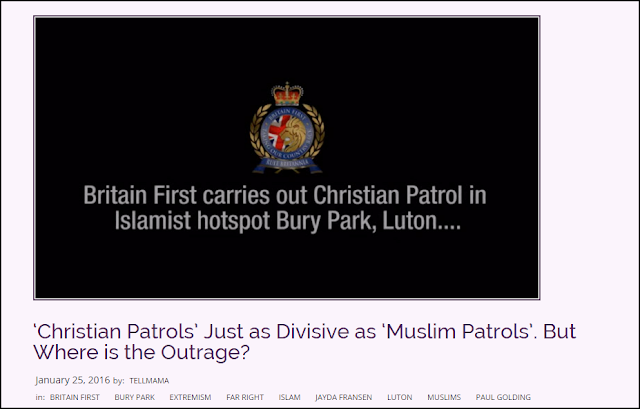 If ISIS are breeding an international group of followers - so is this German anti-Islam Fascist mob Pegida.

Pegida = the Patriotic Europeans Against the Islamisation of the Occident. 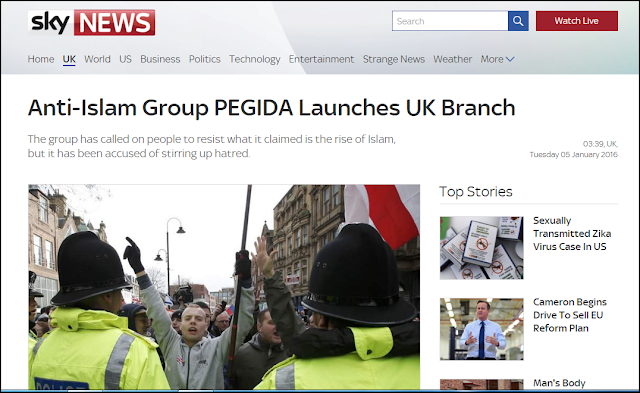 Feeders at the High Table


They are quite a hallowed lot ranging from Saints, Presidents, philosophers, novelists, Prime Ministers,  and some women too!  Here are some names you can throw into the hat : Theodore Roosevelt, St Thomas Aquinas, Bertrand Russell, Stephen Harper, Ayaan Hirsi Ali, Wole Soyinka, Francois Gautier, Taslima Nasreen, Narendra Modi,  Naipaul and Rushdie and of course Trump and Cameron.

But getting back to the British Prime Minister David Cameron.  How his heart bleeds for the salvation of Muslim women.  He reckons they should be made to learn and speak English so that they are better enabled to absorb and live up to British values  .....

He had referred to this nagging problem of Muslim integration on 14 June 2014. 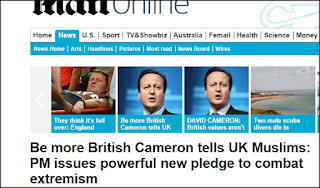 He was adamant that :

It bemuses me as to why Western men and women are so up in arms about the rights and plight of Muslim women.  There's no denying that the integrity, equity and  propriety of women of all faiths and colour and shapes require more attention than ever.

Let me quote these from  Femmes d'Islam  (Women in Islam) by Assia Djebar, translated from French by Jean Mac Gibbon.

1.  Interesting though it is to see what swamps of uncertainty lie in wait for those who think they know most about the problem of the evolution of Moslem women because they are its victims, we should also turn our attention to those who, for a variety of different reasons and on a number of different levels simply pontificate on the problem. (page 11)

2.  But there are worse forms of curiosity than these - more infuriating and laughable because more pretentious or naive.  I mean the well-intentioned, ignorant stranger who is convinced beyond proof that the benighted Moslem woman must be 'rescued' from her misery.  And those less disinterested persons - among them learned scholars - who claim that Moslem women have inferior status in Moslem society because they are excluded from its public activities.(page 12)

For your information, David Cameron, a descendant of King William IV was born in 1966.

For me, the most telling part of Assia Djebar's book is found in the first paragraph of the first chapter.

The story goes that there was once an old Arab who arrived in a European city straight from the wilds of his own land  and was amazed at the pictures of women he saw everywhere : on the films, on shoe boxes, on cheese cartons - on everything that was for sale.  He left the town the same day, or so they say, greatly pitying the women who lived there; in his simplicity he believed that some terrible nameless form of punishment lay behind this exploitation of their likeness. (page 5)

But, finally, let us indulge Cameron's angst about Muslim women in UK - and ask what the future holds for them.

What is the "right" and the "wrong'' of their future status ? 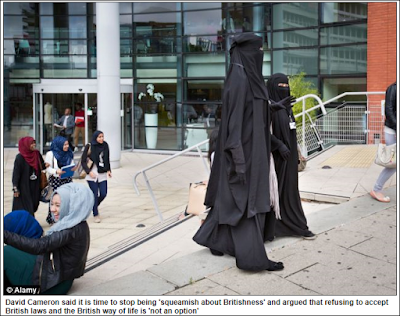 
What about this one?   Hmmmm .... not good enough.  That burka doesn't fit into our culture. 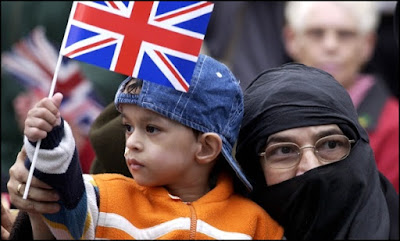 Maybe this is the ideal non-white, non-Christian British citizen.

The British view on Islam is generally true unfortunately. Ironically Islam and Muslim are brought into their full potential ONLY in a secular countries to contribute to humanity. In the so called Islamic countries, even their own people are being discriminated let alone treating the non Muslim "fairly". And fairness to non Muslim is only according to their interpretation. Europe has been through their dark ages when they try to uphold their religion politically but once religion and politics are being seperated as in secular countries, they prospers and so their citizens.