England's greatest bard is William Shakespeare.  He is often quoted to illustrate political shenanigans, hypocrisies and  'over-riding ambition'  that persist in our civilized world.  My favourite quote is Caliban's retort to Miranda in the Tempest. 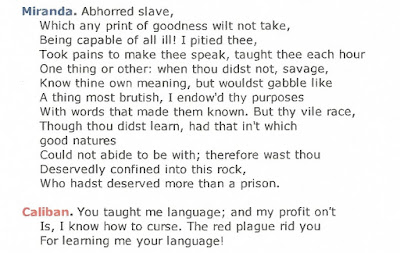 This is the voice of the colonized against the coloniser - using their language to turn the tables on them!  It has always been my desire as an English language teacher that the language my students learn will not only help them to succeed in  their career but to arm them against doublespeak and double standards.

Secondly, in the realm of politics we can always depend on Antony's speech at Julius Caesar's funeral in Act 3 Scene 2 of  'Julius Caesar' .  It is a most exquisite speech in putting down a political foe ; Brutus.

Friends, Romans, countrymen, lend me your ears.
I come to bury Caesar, not to praise him.
The evil that men do lives after them;
The good is oft interred with their bones.

In the end Antony succeeded in riling up the crowd leaving Brutus to cling on to the hope that they will listen to reason.

But we do have our own Bard, a playwright and dramatist like William Shakespeare.
P. Ramlee was also a songwriter, an actor, a singer, a director and his perceptions and observations of human nature in our part of the world are second to none - he surpasses, in my opinion - many academic dissertations and pontifications about our society of yesterday, today and tomorrow!

Here is my perception of  Sandiwara Satu Malaysia with the help of P.Ramlee's genius.

It takes quite a strong man to pedal a bicycle with two passengers :one in front and another in the rear.  It's quite similar to  trying to manage this multi-racial, multi-religious, multi-lingual, multi-conniving, multi-greedy nation !

If we go back to P.Ramlee's archive it's easy to note how naively innocent  our rakyat-forefathers were.  They were schooled mainly in Arabic and Malay.

It's hard to tell the difference between the crooks and the financial wizards, between the promises of UMNO, PKR, PAS and DAP!  They're just a load of  mambang tanah, jin mata buta and jin pakai toncet.  As for the sneering and self-righteous Pak Abu - we have them in abundance in the religious and educational institutions, in the NGOs and the social media.

We are now proud to claim that the rakyat of Malaysia are no more buta kayu, buta huruf, but sad to say we are still plagued with buta akal.

For the Malay elites and the Malays who migrated to the urban areas, they had the benefit of an English language education.  This is P. Ramlee looking at the Melayu celup which later evolved into  Mayonnaise Malays.

Along came Merdeka in 1957 and Malaysia in 1963 - P. Ramlee contributed a patriotic song  Keroncong Kuala Lumpur.

He sang the right words but you can't pull the wool over his eyes.....

Call it democracy or dictatorship - power and wealth will always be concentrated in the few.  For Oscar Wilde (1854-1900), "Democracy means simply the bludgeoning of the people by the people for the people."


However, some of the "people" in Malaysia  have a propensity for never getting enough - sikit kasi banyak minta  .........

Arrows, fishing nets, flying horses, dividends, shares, property, titles, financial fiefdoms and fat foreign accounts - these are the rewards awaiting for those who 'kasi' and 'minta'.

Sometimes this  can take take the shape of bona fide  professional financial arrangements : persuasions for setting up joint companies and mergers and various globalized forms of  perks and handouts.


I dearly wish we could have more of such experiences as seen in P. Ramlee's Ali Baba Bujang Lapok - to hear an outcry like this ...


AL FATIHA for Allahyarham P. Ramlee.  You were the brightest star in our sky - you went too soon but you left behind a great legacy - to smite the greed,  hypocrisy,  vanity, arrogance and ignorance of your bangsa with a deft touch of wit and good humour.


I'll conclude with  P. Ramlee's song of despair and faithlessness - a fitting comparison with the plight of  Bangsa Melayu in the 21st century.

Really TS P Ramlee has no peers with regards to his ideas and portrayals of Malays in his movies and you pick the right ones in highlighting the happenings in our beloved country Malaysia right now. Who are we going to blame now : the Government, the opposition or the Malays who are now divided into multi parties. I wish to comment no more.

The late P Ramlee was well to aware of what going on in Malaysia even back then .Thats why it did not get him anywhere when he moved to KL!He did not want to play ball with u know wholah.

Forgive this geriatric for forgetting to reply.

Both your comments reflect my concern for this country of ours.

Am so pleased to find such 'soul mates' in the younger generation.

Keep up theconcern and the spirit.