When I was a sprightly and happy-go-lucky 17-year-old,  my Sixth Form History teacher Miss T - who was normally an unfriendly and po-faced character - turned on her smile and niceness at me when she 'lent' me a book about Christianity.  She said,  "Do read this, take your time and let me know if there's any other information you want."  Of course I was astounded, wondering "what did I do to deserve this special treatment"?   I kept it for two weeks, and  just gave it a quick scan.  I had no interest in another religion, what I already had suited me very well, thank you very much.  Something told me there was an agenda in this 'kindness' and I returned Miss T her book with a thank you.  She "sweetly" asked me what I thought of it and I gave a  timid reply of  "it's quite interesting".  I can't really tell her what I thought of it and how I suspected her motive - after all, she's my History teacher and  an authoritative figure in my time at RGS !

When I was a 30-year-old  'woman of the world'  (or so I thought), I was doing my Academic Diploma in Education at London University.  I was invited by my Greek classmate to a party at her flat.  I am (and am still today) very uncomfortable when I attend such social gatherings.   And when, as a party piece, my classmate's English husband imitated the genuflections of his Pakistani Muslim flatmate at prayer and watched how the others  found this quite hilarious - I left the room in tears.  I vowed then that no Christian or non-Christian shall denigrate and mock my faith, leaving me in tears and unable to defend myself.

When I was 42 and  happily married to a Caucasian academic,  I got to meet a couple of the spouse's students.  There was a couple, extremely friendly and nice, who visited us several times at our house.
They were too sweet and too nice and they reminded me of Miss T, my History teacher at RGS.  One day, I was cycling at Victoria Park near the University, when I bumped into this sweet couple.  After the usual chit-chat, they invited me to a meeting that they were heading for.  I asked what it was all about - they mentioned a Christian Fellowship - I gently declined.  For heaven's sake, I was as old as their parents and they reckoned they could inveigle me into their flock.  I wonder why they did not try it on the spouse!

[And this particular story has a special twist: that very same year, my spouse's Head of Department and senior professor (a fervent evangelical Christian) invited us both to dinner.  He didn't know me well, but he did know very well that I was a Muslim. However, he assumed that I was a lapsed Muslim - and we were served pork, twice (once for starters, and once for the main meal).  I was stunned. Twice, very politely, the spouse refused the food we were given, and in the end we were given a hastily prepared omelette each. With great irritation on the host's part, and without apology - after all, we had the effrontery to actually both be Muslims!!  And to stand firm. So much for the sweet approach.]

As a Muslim in a foreign country and especially today, as a Muslim in Malaysia, one's radar system has to be carefully tuned to the siren song of Christian evangelists.  Today their agenda is camouflaged in secular outfits of education, health, welfare and anti-poverty schemes,  'human rights' campaigns and environmental concerns.  Their tactics are very different from Miss T's approach  and you ignore them at your peril.

More crucially, for those who are concerned about evangelization in their community and country, they have to learn how to counter the arguments the evangelists (and other anti-Muslim groupings) put across to plug their faith and diminish that of others.

I have compiled in this posting the 'dialogue'  that followed the previous "The Trojan Horse and Footballers from Brazil"  (28 September 2014).   Both the article in the posting and the reply to the Comments belong to Iain Buchanan.

The First Part of the Dialogue 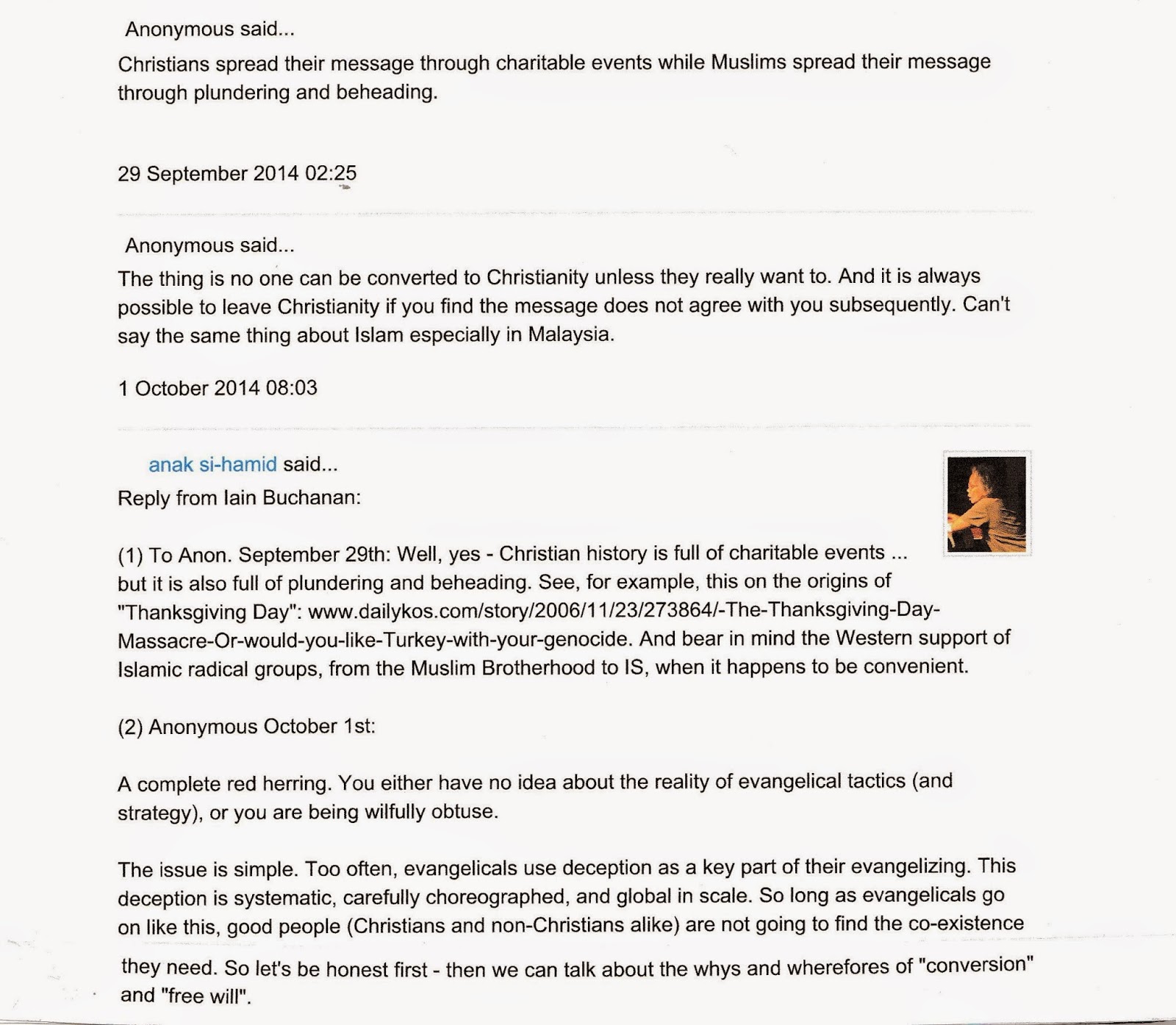 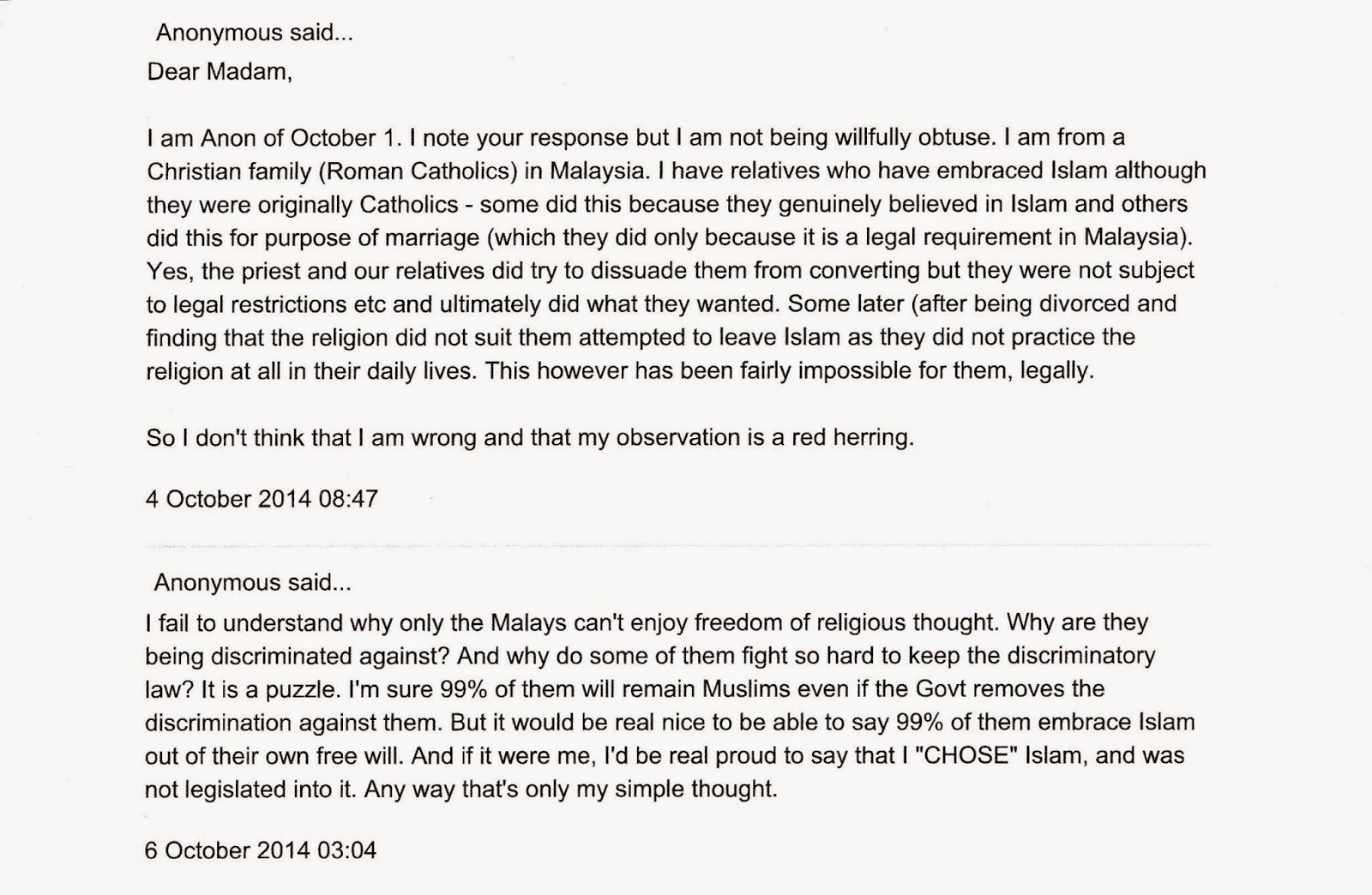 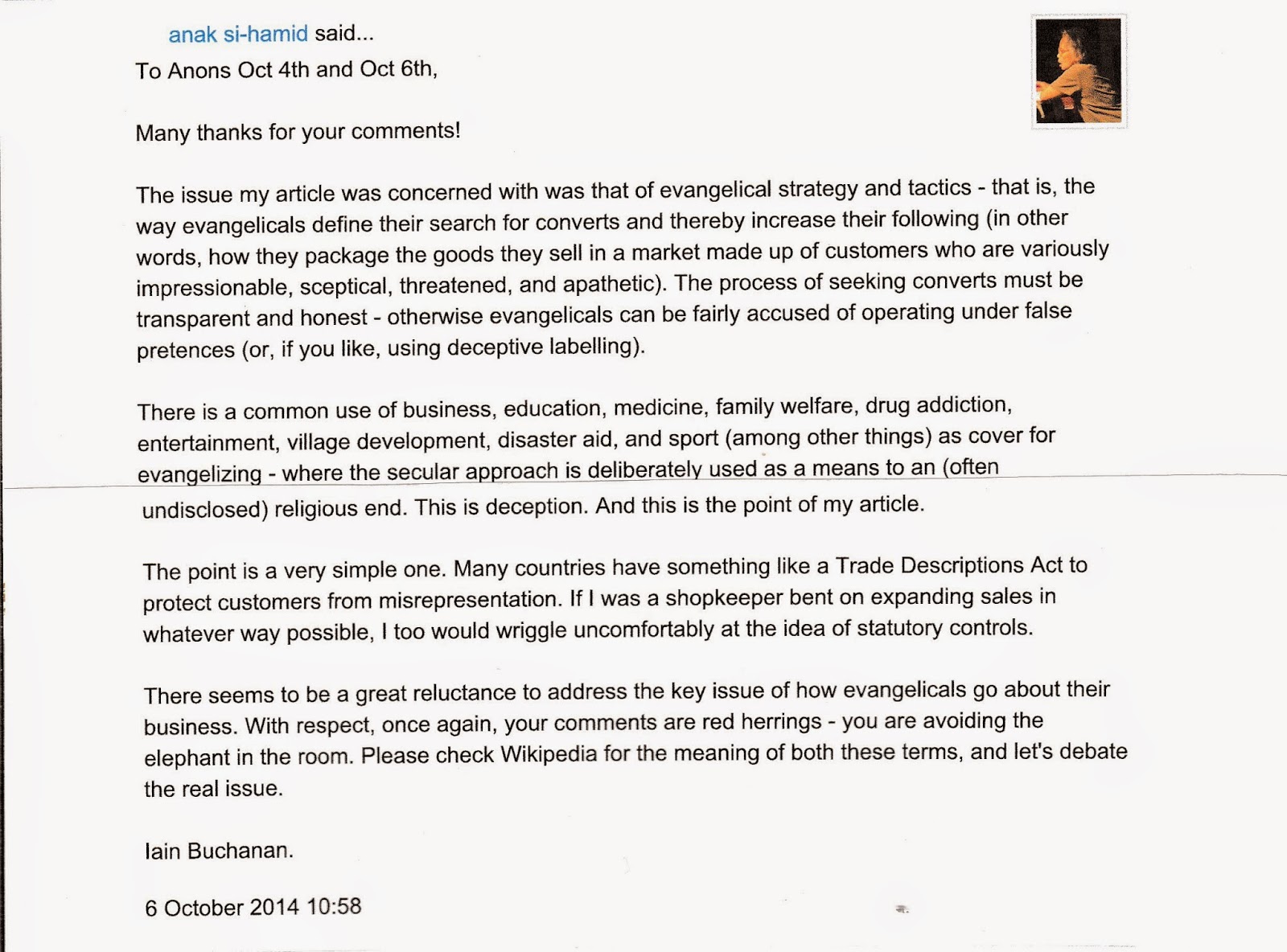 The Third Part of the Dialogue


The issue is not simply one of evangelization - it is also one of honesty.   The evangelical movement has long been corrupted by two rather unhealthy tendencies:  a belief in the utter supremacy of Christianity as the basis for global government  (the ideology of the New Apostolic Reformation is an example);  and a belief that the end (of fulfilling the "Great Commission") justifies all manner of  means - many of which are at best morally questionable, and at worst downright dishonest.   In a myriad ways, these two tendencies interweave, leading to a form of evangelization which is often aggressive, surreptitious, and extremely seductive.   And the key to the problem is the packaging - or the "contextualization".

The entire "contextualization" strategy is based upon the intention to subvert, by whatever means possible, and involves tactics which  (if practised by businessmen) would be winked at as barely permissible.   Of course when evangelicals talk about penetrating "closed " or "difficult" countries under secular guise, they don't use the word "subversion";  no, they talk about "creative access",  "tent-making",  and "Business as Mission".   It is one thing to be all things to all men; it is quite another to set out deliberately to deceive - as evangelicals have done, on a well-coordinated, industrial and global scale.   Especially since the 1970s under the Lausanne Movement.   Two examples - "Insider Movements"  and disaster aid - illustrate the problem.

(a)  Insider Movements.    Since the start of the Lausanne Movement, much of the
"contextualization"  effort has been geared towards infiltrating Muslim societies, in a
variety of ways calibrated along the  "C1-C6 Scale"  of penetration  (from friendly
conversation to  "messianic mosque").   The intent to deceive has been very clear, and is
even given biblical justification by academics:  in the words of Rick Love,  Professor of
Muslim Studies at Columbia International University,  "Jesus, after all, did not raise his
and say   'I swear to tell the truth, the whole truth, and nothing but the truth'  ".
The intention is often presented as a kind of discretion:  again and again, evangelicals
talk about the need to keep a low profile, to go behind doors, to affect local styles, to hide
real names and motives.   The Red Sea Mission put it this way:  "Think of us as
'secret agents'.   Inside the raincoat pockets are hidden gospels in Urdu, Arabic, Persian,
Turkish, and Gujerati.   We are not what we seem.   And our best stories cannot be told.   If
our target is the hidden people .......  then we must be somewhat hidden ourselves."

Of course not all evangelicals approve.   According to Patrick Sookhdev:  "Many
mission agencies are keeping secret their support for the Insider Movements for fear
that donors will stop giving to them in protest.   Some of their missionaries also keep
their identities secret, presenting themselves as ordinary foreign workers rather than as
preachers of the Gospel.   This apparent lack of integrity calls the Christian ethical basis
of the Movement into question."

And it is not only "Insider Movements".


(b)  The disaster aid industry also involves a lot of evangelical double-dealing.   There are
hundreds of evangelical agencies posing as altruistic providers of vital practical aid.   But
what are their motives?   Well, many see catastrophe as a God-given opportunity to
increase their flock  (and even to punish non-believers)  rather than as a cause for
altruism:  John Piper, of Desiring God Ministries, claimed the 2004 tsunami was "just
and good";  Pat Julian  (Southern Baptist relief coordinator)  saw it as "a phenomenal
opportunity",  while K.P. Yohannan  (of Gospel for Asia)  saw it as "one of the greatest
opportunities God has given us to share His love for people."   And then,  of course,
there is Beram Kumar, responding to Cyclone  Nargis as  " a tremendous opportunity to
see the Kingdom of God expand."

Clearly when you see disaster as a golden opportunity, you have to be pretty "creative"
in the way you present your case to the public.   In other words, evangelization has to be
"contextualized"  to be attractive to those in the direst of straits.   A truly  "good
Samaritan"  will give succour with no strings attached.   You cannot say that about a
great many of the evangelical agencies which rush into disaster areas.


(c)  It is the same with  "Business as a Mission"  (and the "Seven Mountains Theology"  for
taking over whole societies, sector by sector, for Christ);  it is the same with the "human
rights"  industry  (which is overflowing with agencies which, at best, are coy about their
evangelical connections - witness the policing of human trafficking by World Vision and
and its spin-off  International Justice Mission).

And it is the same with sport.   There is no question whatsoever that evangelicals  (at the
highest levels)  have devised a thorough-going and systematic project to infiltrate sport in
order to evangelize surreptitiously.   As the example of Brazilian footballers testifies.


And so, once again, it is NOT so much a problem of evangelization, as it is a problem of
dishonesty.   People of all faiths evangelize, or seek to spread their own particular gospel.  There's nothing wrong with that.   The problem arises when we seek to deceive.

we are all subjective of our subconscious, that can push us towards the path of knowledge, truth and freedom. It can also push us towards oppression, conditioning and dogma (given half a chance). Knowledge will win every time (long term).