I did an earlier posting on the school bearing the name of Singapore's first and (so far) only Malay President just about 2 months ago ....  http://anaksihamid.blogspot.co.uk/2013/09/the-yusof-ishak-years-preamble.html .  But I think I did too much ambling with the preamble.

In 1968 during my second year as a rookie teacher , I was given an extra-curricular duty that most teachers avoid like the plague.  Koh Sei Hian and myself were the only graduate teachers in YISS and the old guard in the school reckoned that these two must be made to jump the hurdles and  climb the ropes - just to teach them a lesson : nudge, nudge, wink, wink???   We were given the onerous task of producing the School Magazine. It involved having to organise articles from the students and getting reports from the teachers running the school's various activities.  These two jobs were comparable to extracting blood out of stone. Then we had to go with begging bowl in hands to extract donations and advertisements. I learned how to grow a thick skin while doing that.  Choosing the printers and supervising them (and the cost) needed the executive skills of a CEO.  Arranging the photo sessions for the Staff, all the classes and all the School's activities for the morning and afternoon sessions required the dedication and tenacity of a sheep dog rounding up a flock of errant sheep in the wilderness of Wales.

When the Magazine was finally produced we were  bombarded by tetchy queries like "Why didn't you do this? or that?  What a lousy photographer! The students' articles are hopeless - can't you get better ones?  The printer must have cheated you - it's such poor quality paper!" Blah! Blah! Blah!  Koh Sei Hian and I did this thankless job for year after year until one year I decided to join the Army and run the Girls' Unit of the school's National Cadet Corps (NCC). 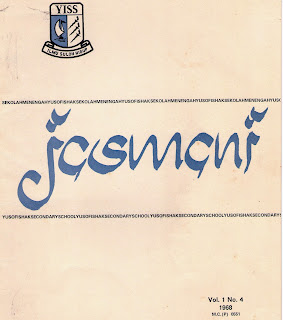 I liked the starkly simple design of the Cover,  the 'Jawi" font  and especially the two 'lines'  above and below the title.

In terms of  the development and demise of Malay education in Singapore, the context has to be understood. During the Colonial period, education  was never planned to be a leveller - as a means of improving the life and fostering the unity of the so-called "multi-racial" population.  Education in English was provided by the Colonial Government with the 'co-operation' of Christian missionaries. Their function was to oil the machinery of the Empire and as a bonus, especially for the latter, to enlarge the Congregation.  The Chinese mercantile community had always been very regardful  and supportive of Chinese education.  They were willing and able to put their money where their mouth was.  All for the tong pao.  The 'graduates' from  Chinese schools faced no problems in getting gainful employment because of their community's domination in Singapore's economy.

Education in the Malay language was never regarded with much seriousness by the Colonial Authorities other than to perpetuate the Malays' ghettoization in the unprofitable, primary economic activities like farming and fishing as can be seen in their curriculum.  In 1959 in Singapore, there were only 26 Malay primary schools and the highest level was up to Standard VII.  "Graduates" from these Malay schools ended up in the lower levels of the administration - as peons, soldiers, police and postmen.  In the private sector they were mainly  employed as drivers, gardeners and servants for the upper and middle-class European  and Chinese employers.  Although there was a request for the provision of English language lessons way before the Second World War, the Colonial authorities did not oblige until after the War itself.

As a matter of interest, the Colonial Government gave a grant of $30 per pupil  for the English schools.  In the Malay schools, it was only $17 per pupil!  We hear a lot about the massive contribution of  Christian Mission schools to education in Singapore and the Peninsula  but it should be noted that their collaboration with the Imperial Order was well-rewarded.  They were generously subsidized and granted a hefty leg-up by the British Colonial Government to the tune of $30 per pupil.

My career as a teacher began in Sekolah Menengah Yusof Ishak  in 1967.  From  Primary 1(1951) to University I was educated in the English stream, quite a rarity for a Malay, especially a female.  My exposure to learning my mother tongue in Primary and Secondary School  was very limited and sometimes non-existent at all.   Yes, I took the Examination for Malay language during my Senior Cambridge - and I got a mere Pass at S7.  I'm not too proud of that today but in the 1960s, Mathematics, English Language and Literature, Physics and Chemistry took priority.  After all, my preparation for my Senior Cambridge Malay Language paper began only in the latter part of  Secondary 4 (Form V).  We Malay girls from Crescent Girls' School were directed to a weekly class at Gan Eng Seng Secondary School on a Saturday afternoon.  We met up with other Malay pupils from several English schools who were in the same boat as us.  For my first Karangan we were told to write about any topic we wanted.  So my title was Darihal Kuching!

Six years later, I was given a simple idea on how to teach in Malay.  This time it was Darihal Rokok.

That will be in my next posting.

YISS is now located at Bukit Batok near Toh Tuck Road. Your former secondary school is still one of the best girl secondary school in S'pore. My wife and her sibling studied in Jubilee Primary just near to YISS. They lived nearby in kampung west coast at that time. Two of her elder brothers studied in YISS in mid 70's. Unfortunately don't know why YISS is not able to become one of best sought after school in S'pore like RI, ACS to name a few. No wonder if you ask young singaporean who was the first president of S'pore they might answer Devan Nair.

Thank you for the very nostalgic writing.

YISS still exists? Wow. Would you know if Jubilee Primary has been relocated anywhere? Your wife and ipar may remember this line:

"Our school has a flag of blue and yellow .."

I was there from 68 to 73, and our "rumah sewa Apek Buta" was a stone's throw away from Anak si Hamid's house at Jalan Mas Kuning (or was it Merah?). I didn't know her personally then, she only started teaching me in 76 but my two abangs and two kakaks went to YISS and she taught my eldest bro.

Miss Hamid, I've always like the YISS logo. Three keris instead of one!

Thank you for the comment. What a small world!
What if your two brothers-in-law (if they were in the Malay medium) were my former students?

YISS will never get into the same league as ACS etc - they come from a very different pedigree and even the name of the first Malay President will not make an iota of difference.

BUT - his name and face is on the currency - that should make millions of difference!

Must tell you a little tale, a true tale, about Presidents.
Some years ago, this British tourist went for a meal at an Indian restaurant just off Serangoon Road.

He observed these two photographs hanging on the wall of the restaurant and he innocently asked,
"Is that the restaurant's owner and his wife?"

The answer: "No, that is the President and his wife."

"So sorry, I'm so sorry. I do apologise." - replied the very embarrassed tourist.

The President then was Mr Devan Nair!

In the end, we all go the same way - here today, gone tomorrow - no matter how much men and mice try to perpetuate their ego! Amen.

Once again, thank you for popping in.

Yes I do like the YISS logo. I've often wondered - did any diligent bureaucrat in the Ministry of Education notice the keris - and its significance?

In the end, that badge will remain the only remnant of Malay language schools in Singapore - hopefully it will survive big brother's scrutiny.

What did I teach you in 1976 eh? You and your scallywag mates in JSS were irrepressible rascals. I loved you lot.

Kirim salam to your eldest brother Ismail. Now, he's made of different stuff.

YISS is the school I am in now, it's near bukit timah hill. Wow, your life in YISS is so long ago...I think the logo has changed and the principal now have changed << lol of course.