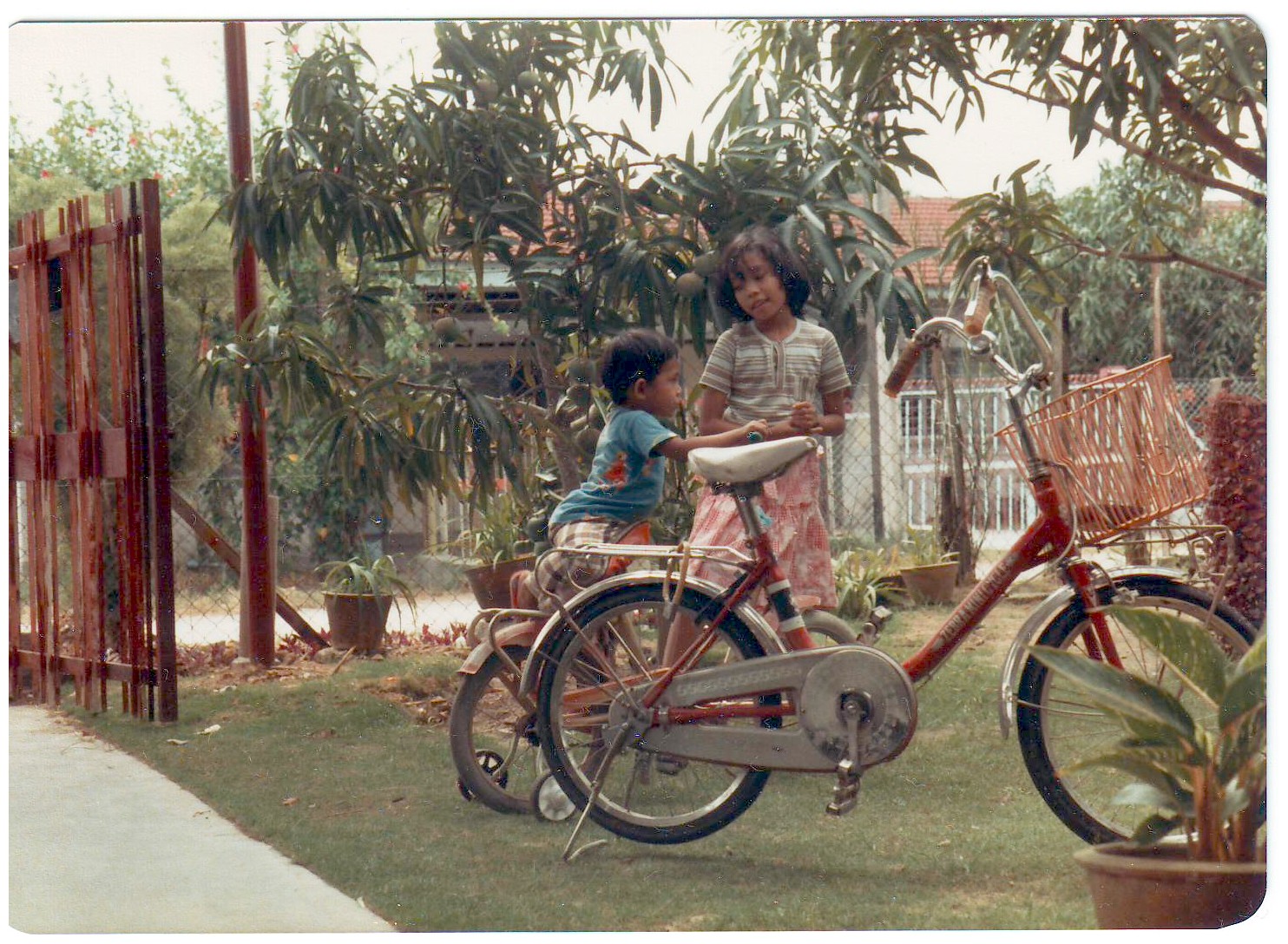 Maria - seen above with her cousin Shah - decided to share her thoughts with ma'ngah.  I have watched her grow from the messy and slightly shy kid in Batu Pahat to the cautious and curious young student in Liverpool, and to what I thought was the grand finale - her marriage and motherhood.

But this year, she has done her Atok 'Antan proud.  Together with her spouse Nadzim,  these two will lift up and re-invigorate the UMNO torch that had been blown out by the winds of greed, egoism, selfishness and ingratitude of the Malays both within and without UMNO - the original and only UMNO that her grandfather's generation had nurtured.  Here are Maria's thoughts.

Tribute to the Backbone of UMNO - the Wanita!

It never crossed my imagination that I would be involved in the country's 13th General Election.  And I didn't know how such an involvement would change how I look at things.

Let me briefly introduce myself:  I am what you would classify as a middle income earner, a graduate,  a mom to 5 growing children, comfortable in our own ways.  My world revolved around my family, including the extended one, and my work.

Now, my husband is a little bit different.  On top of his day job, he is passionately involved in politics.  So we drew up an arrangement, he will have the politics, I'll take care of the kids.  It worked beautifully.  But there were times when I could not understand why politics would take so much of his time and arguments would follow.

Things were just as usual until that fateful day in April this year when he was nominated to become a candidate in the General Election.

Needless to say our lives changed.  But I remained the contented and, now I realised, a selfish me.  Again another fateful event, an eye opener.

It started from the Introduction Event where the candidates and their respective spouses were introduced to the 'Jentera' or the campaign machinery.  The hall was packed, the crowd was huge, people were cheering,  the room was energised.  There were men, women, lads, young ladies all ready to take up the final sprint of the 2 weeks to polling day.  The crowd of ladies and their energy overwhelmed me as a newcomer.  I wasn't aware before this of the numbers of people who were involved, especially the ladies!

This was the beginning of seeing the women in action.  Throughout the campaign period in the constituency, be it in the break of a new day,  the scorching heat of the afternoon sun, till the wee hours of night, the BN machinery worked continuously.  And in that 'Jentera', the Wanita and the Puteri were leading the way in numbers, in spirit and in full commitment - knocking on the doors, giving out hand bills, cooking and so on.  It gave a knock to my heart seeing them every time.  They gave so much and asked for so little.

You see, most of them lead a humble life, even mine looks luxurious.  And they are not young either.  Most of them are in their late forties.  And these are the people who are convinced, who wanted a change in the Selangor State Government, who wanted a better future.  And it's not  just for them, it's for you and me, for our children and their children and more,

I can't find an English word to describe my feelings every day on that campaign beat, meeting them and joining their effort - the experience  "menginsafkan" and it humbled me.

So, pay attention please - to the people at the top - where you are driven everywhere in comfort and everyone is looking after you :  remember these people, these Wanita who worked tirelessly to make sure that you stay in power, to make sure that the Government of the day remained.  So when ever you're making your decisions, spare your thoughts - lots of your thoughts - for them.  For your  future and my future lies with them.  Without them, you are nothing!

Salute to all the Wanita and Puteri UMNO.  ' Perjuangan belum selesai'  my dear ladies and now you have me too.

ps.  If I may, a special thank you to my partner for the journey.

Thank you Maria and Nadzim.  The fulfilment  of the dreams and aspirations of the UMNO pioneers like Abdul Hamid bin Jala now depend on people like you.  I am sorry that my generation did not do a good job and left you to pick up the pieces.

I hope he won. Which DUN/Parliament seat was that?
We need more young, energetic and intelligent young man like this to lead this country.

Thank you Ash and Maria for the tribute. My mother worked to her bone for nothing as a Kaum Ibu member of UMNO in Batu Pahat. Bless her soul that she did not live to see Batu Pahat the birth place of UMNO, lost to the oppositiions. It was a sad day indeed.

No, Nadzim did not win but he did not lose by a huge margin either against the Opposition's bigwig.

He will carry on the struggle InsyaAllah - both of them.

I think this lesson for UMNO was long in coming. They have misused and abused their power for too long.

It's now up to the younger generation to get the dinosaurs to clean the stable and to work for those who really need it and really matter.

That was why your arwah mother became a Kaum Ibu member. And now perhaps your turn has come.

and Maria is a dear friend of mine.. I wish we keep in touch more often... I hope Nadzim will win in the GE14.

Thank you, good to see you again.

Well, you know Maria too well and I'm sure the two of them appreciate your wishes for Nadzim, InsyaAllah.

I was one of the proudest individual when I saw Maria and Nadzim's pic during nomination day. I wished them well and hopefully, Nadzim (or Maria?) will contest in GE14, inshaAllah...
It was a sad day indeed for Batu Pahat. But then again, if it were a "presidential election" kind of system where voters vote for individuals rather than parties, I wouldn't have voted for the BN candidate of BP...

And allow me to add this:
Wanita UMNO is indeed the backbone of UMNO...always has been and always will be...salute to them!

Can help but to add to Uncle ZT's comment about Wanita UMNO being the backbone. If Wanita is the backbone, what is Puteri? The Appendix ready to be infected and inflammed? Or Appendicitis already chopped off? I am bad, I know. Kill me!

Thank you for your kind thoughts and observations.

This is the problem with UMNO - their selection of candidates and the maintenance of the dinosaurs at the top. Too many behave like some kind of warlords controlling the party at the base to keep themselves at the top. UMNO needs fresh, honest and committed younger blood.