Creating a bolt - hole in Leicester

For  the last week I have been caught up in a major makeover project - to transfer paraphernalia from this back room .....

to the front room which is also the study/guest room.

This involved sorting out nearly 500 books, re-packing boxes and cases of what the spouse teasingly considers as junk.  The computer table had to be given away together with over 250 embroidery, cross-stitch, patchwork and applique books sob, sob - so as to make way for a bed in the back room.

Back in Kuala Lumpur we were plagued by the infernal noise from Ikan Bakar Sekinchan.  Read  http://anaksihamid.blogspot.co.uk/2012/07/malaysia-boleh-tak-bertimbang-rasa.html

....... in this row of Victorian terrace houses, we have the joy of having 'new' neighbours:  East Europeans on the left and East Asians on the right.  These houses which are over 100 years old were not built to cope with the cacophony from loud radio and TV and with neighbours who are not familiar with living terrace-style, almost cheek by jowl in urban centres.  In the first place, you do not shout  when you want to communicate with each other under the same roof.  When the adults shout, the children scream.  That comes from our East European neighbours.

Our East Asian neighbours on the other hand would be whooping and yelling with joy (at night) over their favourite TV programmes.  And as they work on the late shift, they would get home by near midnight to natter and clatter with their cooking.  On weekends it can get a bit more raucous - the after effects of happy boozing.

We have an additional problem on our street.  Our neighbours cannot speak English and so a civilized tete-a tete is out of the question.  We did manage a certain degree of success with our East Asian neighbours.  When we knocked on their door to explain our problem - the young man opened the door, glared at us saying,  "What, what you want?" After we gently asked for their co-operation, he muttered  "Okay, okay" and shut the door on our faces.  Albeit they did quieten down - but not enough!

As for our East European neighbours, we dare not approach them.  Three years ago, the tenants from Poland used our backyard as their ash-tray.  They pounded their Polish rap music as of eleven in the morning when they came home from the night shift and more wall- pounding music at night up to the early hours of morning during the weekends - and of course they were all plastered with vodka.

As if to point two fingers at us for trying to get help from the police they smashed their unwanted TV  in front of our window and the tyres of our Corsa were punctured.  Fortunately, as we were just getting to the end of our tether it was time for us to return to Kuala Lumpur and when we got back they had gone.
More have come and gone on both sides of our house since then.  The only decent ones were two men from Hungary a year or so ago.

Today Leicester is lauded for its "liberality"- and landed (like the rest of the country) with  a 'multi-cultural' population  as a result of immigration.  In the Census for 2011, Leicester's total population was 329,000.  The table below shows the ethnic composition of Leicester. 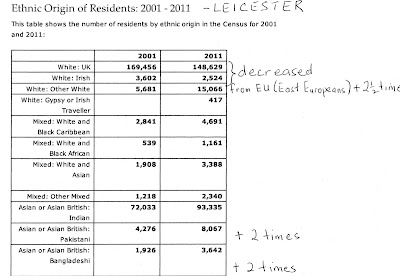 Other Features of Leicester from the Census of 2011

Of course the "White British" are fearful of what's happening to the population composition, not only of Leicester but of the United Kingdom as well.  As I said to my spouse (and he agrees with me) - it's the chickens coming home to roost.  Britain did this to Malaya over a hundred years ago and now it's happening to them.

Well, today the bolt-hole is done - for Darby.  AsH has the other room. 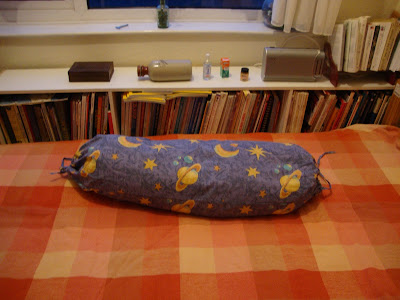 The bantal peluk in the picture is a family heirloom.  It was made by my mother and has travelled from Pasir Panjang to Jalan Mas Kuning, Royal Road and Johor Baru.  Then it returned to Singapore (Boon Lay).  In 1995 this much-cuddled bolster migrated to Leicester and maybe one day I will take it to my other home in Kuala Lumpur.  This bolt-hole bears all the hall marks of an ancient person's den.  Second from left is a ceramic hot water bottle, followed by Kwan Loong Oil, Olbas Oil and Minyak Gamat.

Finally a few days ago, we were surrounded by this..... 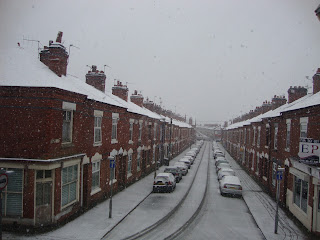 The Heavy Metallists and the Jedi Knights of Leicester wish all who read this blog a happy weekend.  May the force be with you.

This song is especially for our dearest Lely.
Posted by anak si-hamid at Thursday, January 17, 2013

just for your info...or maybe you knew about this vid.

I'll look it up. It's been snowing for days yeah! Enough to make a snowman like you all did years ago.