Facts that remind me to remember. 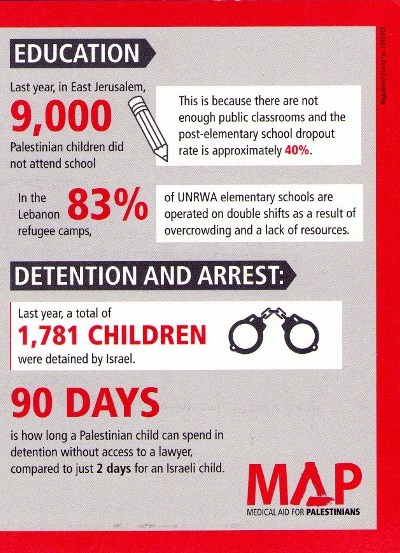 
There are those - like the 3 wise  monkeys - who shut their eyes, their ears, and their mouths whenever the
word Gaza or West Bank or Palestine or occupied Palestinian Territories (oPT) are mentioned.

It could be because their hearts and heads are with Israel.  They are made up of, at the very worst,  supporters of Zionist Israel and at  best, their apologists.

There are also those in the liberals' Brigade who make out that they are above politics, who think it's beneath them to take sides, who mouth the "yes but ......  and no but ....."  line whenever Israel's atrocities are mentioned.  You expect this in the Judaeo-Christian Western world, but when it's spouted by Malaysians it becomes a sick joke.  These brown  (and many other shades of non-white) mems and sahibs are still alive and kicking  but they now fancy themselves as "liberals" and "radicals" - the appendix of the Human Rights Sorority.

Then there are some - with no particular stand and opinion - who are like the ostrich, burying their heads in the sand and ( apologies for the mixed metaphors ) preferring their little lives in their little fish bowls asserting  "I am not my brother's keeper.  Go away."

But there are also many who do care, but who wish that this injustice, this bloodshed would go away - that these images of bloodied and maimed and dying and dead children, of women crying their hearts out in grief, of the tortured anger and pain in the faces of  frail old men, sturdy young men and innocent young boys, would just disappear  -  just like a fairy tale where  "they lived happily ever after".

Ponder on this.  "The process of national revival of the Jewish people is irreversible and has its internal logic.  We shall have no peace as long as the whole territory of the Country of Israel will not return under Jewish control.  This might sound too hard, but such is the logic of history  (my underline) The war on the Holy Land has been already fought for four thousand years and the end cannot be seen.  A stable peace will come only then, when Israel will return to itself all its historical lands, and will thus control both the Suez and the Ormudz channel.  The state will find at last its geostrategic completeness.  We must remember that Iraqi oilfields too are located on the Jewish land.  This may seem utopia to many now - but an even greater utopia seemed a hundred years ago the revival of the Jewish state  ....... if you want this, this will not be a fairy tale"
Rabbi Avrom Shmulevic of the Bead Artzein ("For the Homeland")  Movement

I must admit to feeling that way too, at times.  But at 68, life is getting shorter and more precious - and for siHamid's grandchildren and 11 great-grandchildren in particular, I must make a special effort.  I have to write them this narrative.  I want to leave them this story of the Palestinians - a story that seems to have little or no cachet even in a Muslim country like their homeland, Malaysia.  I want them to have the knowledge and the information about this ancient people in a world that cares little for them.

I  was 42 when I learned of  the gory details behind the plight of the Palestinians.  I want my father's  keturunan to learn it now because they won't get it from their history books, from the print media, from Hollywood movies, from imported TV programmes, from 'bestseller books' and computer games.

Right now it's difficult to look forward to a just resolution for the Palestinians in the land beloved of the world's three major religions.  Despite the recent entry on Friday 30 November, of the Palestinian Authority as a non-observer State in the United Nations, Palestine will  have the same status as the Vatican, recognising only its sovereignty and the right to join the International Court of Justice.

I suppose after nearly 65 years of of bludgeoning by  the Israelis - after the Occupation of their homeland by the Zionists - after the land grab by Jewish settlers of their territory - after the tractors and tanks and fighter planes and drones and missiles have demolished their homes, hospitals, schools - after Israeli/American arms (including experimental weapons) rained deaths on their civilians and children and  mutilated Palestinian babies even while they were in their mothers' wombs - they have to be thankful for little mercies.

The central truth for the Palestinians is that their past, present and future have been controlled, occupied and trashed by 20th/21st century Empires and their Centurions who have a voracious appetite for power.

You cannot describe the killing of innocent civilians as a war, dressing it up with benign titles like Operation Cast Lead and Operation Pillar of Defence.  It might do for a Hollywood movie by Spielberg and Warner Brothers.

I have already referred in earlier postings to Mark Twain's "two reigns of Terror".  There's the momentary swift terror, the "terror of swift death at the axe compared with lifelong death from hunger, cold, insult, cruelty and heartbreak."   The Palestinians are bearing both.

It has been a long and painstaking task to do the coming posting, to outline the scenario of the Palestinians' Short and Long Terrors.

Puan, your writing and the song touched me. But, I think we are doing it the wrong way as well as we do not have the support from those that should support us. The saud family wrested power and subdued the other kabilah and becomes the king but the wealth from the earth was not shared with the ppl who are supposed to be protected. He called himself the protector of the two mosque but he didnt do anything to protect palestine ie aqsa. instead we hear the extravagance of the arab families. this also applies to egypt, syria, jordan iran iraq etc.

We are also bombarded with fb to share and like pages that depict israel atrocities. and some religious msg that says doa adalah senjata orang mukmin. but for how long we have been doa'ing but nothing. I think this is God's way of telling the muslim that He is not going to help us if we dont help ourselves. The reason why I say we are not helping ourselves is the divisiveness among muslims..look at PAS and UMNO, mazhabs, sunni and syiah. If we think that the 15 century was the start of Islam going downhill,I think the 21 century is the start of Islam going into the ravines. I might sound negative but I think in my lifetime I will most probably see the dissapearance of a country anda bangsa called Palestine.

As salam Kak Maznoor,
Please keep on writing about Palestine. And pray that you and significant other will be in good health always.

Sorry for the late reply and thank you. I absolutely agree with everything you wrote and like you I don't hold much hope BUT I shall try to pass on the cause to the younger ones, at least in my family.

As Muslims we are too comfortable and lack the care and compassion for our fellow humans.

Salam Baiti. Good to see you again. Hope you're both well.

My apologies for the tardy reply. We're both well, thank you. But it's winter - in both senses of the word - and we do feel a wee bit tired. But we shall forge ahead, just a little slower.