This April has been the wettest since records began.  Gone are our hopes for a splendid springy R  &  R in Leicester.

So far, 2012 has not been an easy ride for some folks who are close to us, both young and old.  The stress and strain of the 7 weeks' mission to Singapore  had  precipitated  damage to the spouse's one good hip.

Then on  Friday  27 April he had  to take an 11-hour journey by train and ferry to Jersey to see to his dying aunt, Joyce.  Although he was two hours too late, he managed to 'see' her and to help  arrange the details for her funeral.  The return journey took longer as the ferry was delayed by three hours due to bad weather.  Train travel was adversely affected by strike action.  He was supposed to be home by Monday midnight but I had to wait until Tuesday afternoon when I opened the front door to a bedraggled man standing in the pouring rain - with an additional leg - a walking stick donated by Joyce's Rest Home!

The trip to Jersey aggravated the damage and it sealed our worst fears.  Another operation will be in the pipeline , we will have to be back in KL sooner than planned.  Tung Shin Hospital, here we come.

But I have managed to complete bits of my homework here like tidying the backshed, sorting out the paraphernalia in the kitchen, shopping at Animal Rescue Charity Shop, cataloguing my Files and Folders and Cuttings and clearing out the books and clothing to give away to the Charity Shops.  I had cooked 3-star dinners for Jack, Dorothy and Ann and later on for Doug.  Next week we will deliver 15 home-made samosas for Colin and his colleagues at Leicester University Central Photographic Unit for helping us out with an important printing task.  We have re-connected with friends like Yasir and his wife Rafiah, Mr Kadri (our electrician) and his family and with Jagdish my young workmate from CPI days.  The wonky central heating boiler, water heater and telephone land line have all been repaired.  Phew!!

As for Fish and Chips, that will have to wait for better weather.

Time and tide  they say, wait for no man.  But during the interim, they also hurl unwelcomed sticks and stones into our space.  As we have the benefit of being older and wiser (?) we have to put up with what is thrown at us and acknowledge life's uncertainties.  We cannot assume that  last year's birds will be back in the same nest.

All things are new, - the buds, the leaves,
That gild the elm-tree's nodding crest,
And even the nest beneath the eaves;-
There are no birds in last year's nests.  (From  It  is not Always May by H.W. Longfellow)


But Everything ends in songs. according to Pierre-Augustin Caron de Beaumarchais , 1793-99.

This popular Italian tango Chitarra Romana  or Roman Guitar, composed by Eldo di Lazzaro (1902-1968) has been sung by such well-known singers as Pavarotti,  Placido Domingo and Connie Francis.  But for me the best version is by Carlo Buti, recorded in 1934.

Purple shadows are creeping and the fountain is weeping.
Hear the trees gently sigh while the winds murmur by as they arrive from afar.
All my memories are waking 'neath each watching star
Like the one who's forsaking, oh my Roman Guitar.

This lovely tango takes me to the late 1980s when we were 'merayap-ing' along Arab Street, Singapore.  We found a shop displaying a box full of Malay songs on 10 inch long-playing records.  These were mainly songs from the 1950s and 1960s.  The Chinese shopkeeper was selling them at $2 per album and we bought the entire collection.  Altogether there were three sets of eight albums.

At that time I had a friend from Singapore University days who was working as a senior librarian at UKM.  He was telling us how he had great difficulty in trying to enlarge the University's collection of Malay records.  During one of his 'hunting' trips in Penang, he found one Malay 78 rpm record - dusty and badly marked with scratches.  The shopkeeper wanted MYR10 to part with this one record!  Hussein was over the moon when we gave him, for the Library, one set of those Malay albums.  I often wonder if they are still in the Library.

Here's one of those fabulous albums. 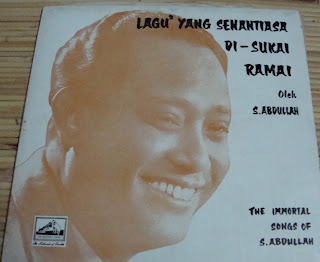 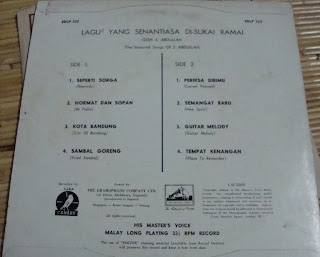 The spouse recognized the tune of S.Abdullah's 'Guitar Melody' and for some time we thought it was similar to Tino Rossi's Guitare d'Amour.      http://anaksihamid.blogspot.co.uk/2012/04/time-traveller.html

After more searching through his memory and the Internet he finally found the sister song, the Italian Chitarra Romana.  That was another successful piece of musical sleuthing.

I hope you will enjoy this beautiful melody from the 1930s/1940s - a meeting of East and West - from when most of us were just twinkles in our fathers' eyes.


Never mind about this year's empty nest, we discovered a beautiful bird-song from the nests of a misty long, long ago.
Posted by anak si-hamid at Saturday, May 05, 2012

As salam Kak Maznur,
Sorry to hear about Abang Iaian. Hope he'll have a speedy recovery. You take care too ya.
p.s. lovely oldie tune there!

Glad you like the oldie, the tune and maybe the humans? ha ha!

You take care too.

So sorry to hear of Uncle's hip. All the travellings and 'what have you' must have taken it's toll on him but saya doa2kan agar dia sembuh soon. You too must take care of health too ok? Seronok dengar lagu2 lama :)

Uncle (and I) are much soothed by your kind thoughts. Thank you.

I really love those old songs, drop in at KL if you want more.

I will be here when the two of you are you for the new hip.

Till then, take care.

Thank you Bru from Unc for your kind thoughts and he sends his salam.

Abang Iain is holding up well. It's all due to Decrepit Old Age - but we'll get there InsyaAllah.

Will definitely keep you in touch.

Salam and love from the gorgeous geriatrics