This we found on the kitchen table when we got back yesterday at 10.30 am. 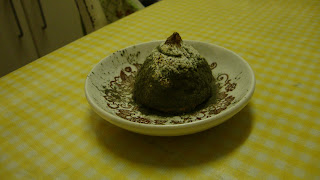 It's a shrivelled, mouldy 7 weeks old lemon-half that we left behind when we departed for Singapore on 17 Jan.

And this is my pride and joy which got here intact.  I ask for your indulgence to show off how I did it!! 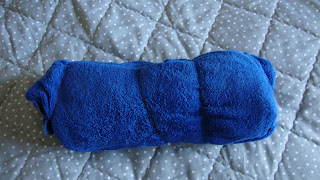 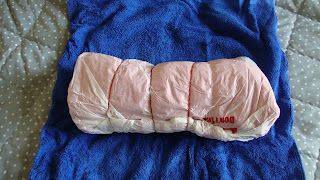 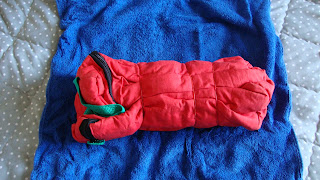 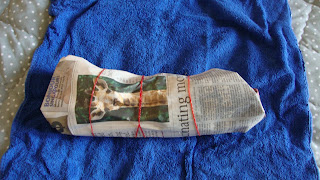 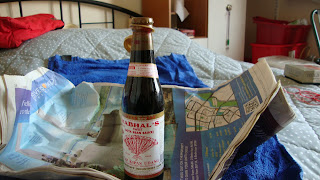 In the next day or so I shall make sambal kicap manis with finely diced onions, red chili and lemon (maybe I can still squeeze something out of that 7 week old lemon?) juice as a dip for   ikan bakar!

As we were going home to Leicester from Singapore, Oi Bek had got us an SIA ticket.  We were told in the departure lounge that there would be a slight delay as there was "a problem with the cooling system in the cabin".  Thirty minutes later we were herded in.  The  "aircon was still kaput" (using Singapore lingo and not corporate language) and the passengers used the safety instruction pamphlet to good use - as a fan.  About 45 minutes later we all cooled down.

About 2 years ago, we travelled back to KL by SIA, again by  kind courtesy of Oi Bek.  She of course ordered Muslim food for us. On the return flight to LHR  (London Heathrow Mahzan, not Lahore - you were always a silly boy!)  the Muslim food , to put it mildly, sucks!  If it was supposed to be Malay-Muslim (as it was from Singapore) food it smelled of Malay-style cuisine cooked by non-Malays as is now commonly found in Hawker Centres in the Republic.  As for the taste I leave it to the imagination.

On this journey, we had no complaints with the main meal of lamb in a sort of curry sauce, mashed potatoes and a couple of slices of vegetables.  Come breakfast the main meal was chicken curry!  No rice, no roti or chapati.  When Iain made an inquiry we were told we could have it with the bread roll! And we could have more bread roll if we wanted to!  Alamak, mana eh sai. Like dis cannot lah.  Singechiapore is in the middle of Malay Muslim world - you mean so susah to get proper Malay-Muslim food ah?  I not kiasu one, just find food on this stylo airline so teruk!

We arrived at 5.45 am.  The British Indian Immigration Officer gave me a harder time with my "Settled with Spouse" Visa than all the previous Caucasian officers.  It's a regular scenario at LHR (London Heathrow, not Lahore).

Now to the carousel.  My heart was in my mouth.  My kicap, my precious kicap, shall I see an unbroken bottle!!  Then came an announcement.  Luggage from Flight SQ322 will be delayed because they could not open the plane's door.  It was frozen, so they said.  Temperature at LHR was certainly above zero.

But I am certain there are worse stories regarding other airlines.  Except that SIA is one of the world's most highly regarded people carrier.  In the mid 1980s,  I was on an SIA flight to London when one of the engines caught fire as soon as it took off.  Somewhere over KL the plane made a U-Turn back to Changi (or Paya Lebar?).  They took over 3 hours - with us waiting in transit during the early hours of morning - before they decided to move us to a hotel at 6am.  One irate 'ang mo'  from First Class refused to board the bus to Meridien Hotel and demanded a taxi.  So there was the usual mantra of "yes, sir, we shall get you a taxi, sir".  Later I asked the family if there was any news about the engine fire on an SIA flight. What a stupid query to make.

Most important, my kicap is now safely back in one piece in Leicester.

And we left a Lely who is well on the road to recovery.  She is responding well and courageously to intensive physiotherapy.  She has got a lot of guts and determination to see her through this second chance that Allah has given her.

I am very glad to know that Lely is well on the road to recovery and especially glad to see you Kicap cap udang managed to arrive in leicester in one piece..

Good to hear from you. With Lely getting better and my Kicap Cap Udang safe in the larder, what else can one ask for?

Alhamdullilah, you and Uncle sampeh rumah safe and sound :) oh and your kicap too, hehehe
Ikan bakar with finely sliced onion and chilli sure sound nyaman with the kicap MH, bon appetit!
xoxoxox

I thought you might be fed-up thinking of food - especially after cooking for that big birthday bash!

glad the kicap made it!! :D

We flew into LHR on Saturday morning. On MH. We are nestled here in Paddington.

We had a botol of Kicap Manis Kipas Udang also!

It is the same SOP for all our overseas travel. Rolled up in clothes and checked in.

Anyway, FYI, we had lunch near Trafalgar Sq today. On each table, there is a bottle of the same Kicap Manis Habhal.

Look it up. Jom Makan. There is a branch in Westfield Mall, near Sherperd's Bush too.

Thank you for the info. We're not frequent visitors of the Big Cob (my other name for London) but you can see how vital Kicap Cap Kipas Udang is a must for Malaysian haute cuisine. It will soon be adopted by Chinese, Indian Vietnamese, Burmese, Indonesian and Thai restaurants.
Furthermore British Customs might cotton on to this Malay fetish and conduct strip searches on our suitcases ha ha!

But you know where you can get superb applications of the KCKP - here in Leicester!

Thank you for the felicitations. My Kicap saga has truly captured the imagination.

Hope you're a fan of KCKU too.

When I was studying in Portsmouth abt a decade ago, we could easily get Kicap Habhal in asian owned grocery stores. And these shops were in abundance in Leicester. Do they not stock the product now?

Indeed I had no problem in getting my favourite kicap 4 years ago.

The one Chinese provision shop left in Leicester stopped stocking it.

We now have in Leicester more East European grocery stores instead.

People may think I'm an agent of Kicap Cap Kipas!