That's my latest title from Lely just because I did not do a good job of wrapping up two bottles of Habhal's Kicap Cap Kipas Udang.  They broke inside the suitcase and made a trail of thick inky liquid dripping from the suitcase as Iain picked it up from the carousel.  Intermittent little drips persisted all the way from Terminal 4 to the Central Bus Station at Terminal 3.

I managed to clean up the kicap spill on the outside but the mess inside the case was too much to bear.  Here's a teeny sample of what it did to my CD jackets. 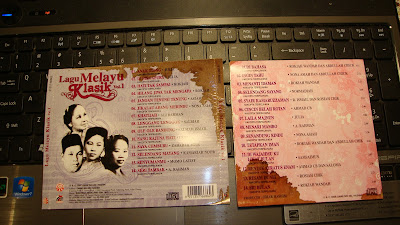 But there's no point in crying over spilt kicap.  As Oi Bek suggested,  Lely will have to cart 2 more bottles of the precious stuff when she comes over in Spring!!

Hidayah my niece was just as sympathetic as Lely.  She asked if my belacan and chili got drowned in the kicap!

As for Hidayah's brother Mahzan, when he read my previous posting  KUL to LHR  he was  "secretly hoping" that he would get an e-mail from me  "from Lahore".  You see we have a dark travel track record.  We presented the previous year's bus ticket on the Nasional Ekspres from KL to Batu Pahat and  got uppity when the ticket clerk refused to accept it - but we received an indulgent smile later when we apologised and  realised  how idiotic we had been.  Then we went to KLIA to fly to New Zealand not realising it was one day too early!

Some years ago the Hasry Bus from Singapore to Batu Pahat failed to pick us up after the Immigration check at JB.  We wrote such a stinking letter and got them to pay compensation to a local (BP) orphanage.  Besides, they also nicked my CPF umbrella which was left in the bus; a free gift from the Singapore garmen, so good one what.  This time, Mahzan and the others were hoping we would lose our direction or be abandoned again,  and end up in Lahore instead.

Well , all of the above, except Oi Bek, will be struck off my list of Sayang di Sayang  and henceforth will only be offered a meal of rice and kicap when they turn up under my roof.  As for the kicap, they will have to BYO  (Bring Your Own), like wine.  So there!!

Before I huddle under the duvet on this bright and sunny and cold afternoon, here's an image of what two English young male neanderthals left behind on the MAS seat after they pushed their way to be first off the plane at LHR  (London Heathrow - for the benefit of nerdy nephew). 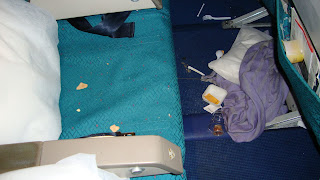 I hate to think what London will look like after the Olympics.  But they will of course blame it on the foreigners.

Halfway through the journey, the spouse had to tell them to quieten down as this was a night flight and people were trying to sleep.  One of them boasted  about how he finished off  two tumblers of beer, one of wine and two orange juice during one meal.  And at each meal he would be regurgitating his insides with 3-4 vile burps. Ugghh!!

And down in cargo, my two bottles of kicap were sloshing about in my suitcase.

Still, it's wonderful to be home.   The temperature here is 4C.

ASH - this kicap incident article is precious, so vivid, its just too funny ! Made my day.

I always bring kicap to NL too! So far no disaster though :) I agree, kicap is very preeeecious.

This "kicap incident" will be a constant tale for my so-called friends and relatives to warble about when we get home to KL.

Remember what Hansel and Gretel did to the wicked witch? And that's you!

Pray tell me, how did you wrap up your kicap to survive such a journey?

I used to be able to buy Habhal's Kicap in Leicester but they have stopped the stock for the past two years.

And thank you for dropping in.

Yes I love this Cap Kipas Udang! Wrap in plastic bag first (in case!), then newspaper.

Then wrap a few layers of clothes around it. I'd place it quite snugly in between something firm but still yields a bit (like a shoe box or clothes).

Thank you so much Sya. I failed to wrap it in a plastic bag and rolled up newspapers. I gave too much credence to a plastic wrapper for packing wine bottles. And also my suitcase was not firmly full enough.

Lely, will you take note of this for when you turn up here>

Maria , keep your comments to yourself or you'll end up like your siblings Hidayah and Mahzan

see you end Feb or early March. keep it chill till i come, please. how's hipman doing in the cold english weather?

The hip man is real cool man - back in his cold kampung - thank you. In fact he;s having his usual kip right now - as snug as a bug in a rug.

Goody - see you in Feb/March - will keep things cool till you turn up. Might be some lovely flowers awaiting your arrival.

Really look forward to having you here - we need the back shed repaired.

Datin, Rocky can bring the kicap !

Can you just picture this? Our rough and tough rocker, blogger and biker carrying a bottle of Habhal's Kicap in his duty-free bag!!!