The Great and The Small

I've been caught up doing a room clearance - checking out dusty boxes and files - and found an article on the Great Mosque of Paris,  the first mosque to be built in Paris in 1926. 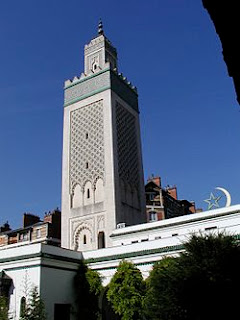 It's the largest mosque in France and the third largest in Europe.

However this ranking pales in comparison to its other credentials.

The Mosque was built to honour the soldiers from the French Arab Community (meaning those countries colonised by the French)  that perished in the First World War - sometimes called The Great War or what I prefer to term as the 'First European Tribal War" that engulfed the rest of the world.  Many of them died in the Battle of Verdun (in France) in what was considered the 'greatest and the lengthiest (battle) in world history'.  The battle covered less than 10 square kilometres and stretched for 10 months from February to December 1916.  Over 700,000 died, or were wounded or  missing in action.
The Mosque also played a very significant role during the Second European Tribal War.  I wish some renowned Hollywood director like Spielberg would note this.  The Mosque provided shelter and safe passage and even fake Muslim birth certificates for Jewish children.  (Are you listening Netanyahu?)  It became a secret haven for those on the run from the Nazis.

And recently, Sarkozy, the French President of Jewish descent banned the right of Muslim women to don the burqa and the Hijab.  Sacre bleu!!

Sometime in the 1980s or 1990s (?) I attended a Conference on the Muslim Parliament of Britain in London.  I heard mention that London's Regent's Park Mosque ....... 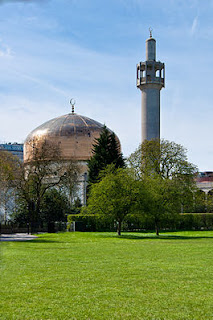 was built on land donated by King George VI in 1944  in exchange for a site in Central Cairo on which to build an Anglican Cathedral ( All Saints Cathedral). 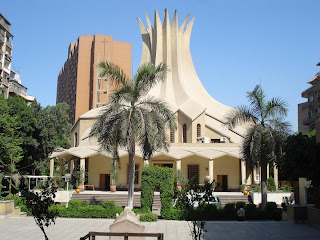 You see, 'there's no such thing as a free lunch'!  The British establishment regarded this as a tribute to the Muslim soldiers who died defending the Empire during the Second European Tribal War!

By the way what did we get in exchange for all the Cathedrals they constructed in Singapore and Malaya?

But there are also the little mosques - little havens of faith and peace.  I took this photograph ......... 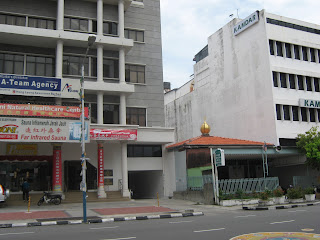 ........in Penang last year, of a little mosque hemmed-in between two high buildings.  I regret I did not note the name of the mosque or  the street name.
This image is almost symbolic of the fate of  Malay-Muslims in DAP's Penang.

Two years ago, I went on a nostalgic trip to my old haunts in Singapore and was delighted to discover that this mosque, Masjid Hussein Sulaiman, had survived the onslaught of progress and development. 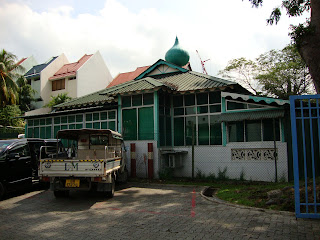 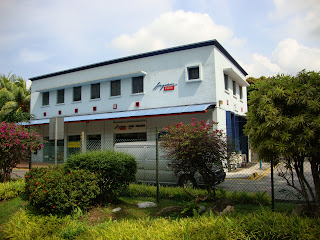 .......... which was just next door to the Mosque - to buy stamps and to post letters for the family.  I would take this opportunity to cycle right to the end of Pasir Panjang Road - just for the fun of going at 'high speed' on top gear  on my trusty Rudge.  There was hardly any traffic and it was flat terrain all the way.  Wheeee!!!

As for this precious book written by Hadijah Rahmat ...... 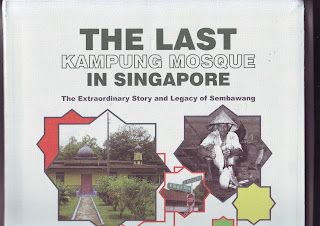 .......... it speaks for itself.  Geraldene Lowe, a good friend of Ruqxana, kindly gave me this book.  It's so poignant and sad to see the heart ripped out of the kampung.  Well, the kampung itself was dismembered.  Thank you Geraldene and Hadijah Rahmat.  This will be the only permanent  symbol of what we have lost.  I very much hope that Kuala Lumpur's Kampung Baru will not suffer the same fate.

And so, while we extol the grandeur and beauty of our grand mosques, let's remember and protect the little ones.

An utterly racist and deluded article. You come across as noting more than a myopic misguided stooge of dumno

It must take a particularly shabby and shallow mentality to regard a posting about facts behind the construction of two mosques in Paris and London, the slaughter at Verdun, the demise of a malay kampung and mosque in Singapore as racist, myopic and deluded.

When does the criticism of one political party suggest that one is a crony of another party? What's happened to democracy and freedom of expression, Mr/Ms Anonymous?

Please send your moronic and self-righteous opinions somewhere else.

and i m not aware of this Masjid Hussein Sulaiman. i must go search for it. i m happy to chance upon ur blog. and as i read blogs of those from ur generation, i'm greatly impressed by the oh so very powerful english which our generation has sadly not acquired, instead we got the easy lazy singlish.

That masjid is at 6ms Pasir Panjang.

For people like you and I where English is our second language we do get schizoid about our relationship with EL2. When we write, we do it proper so to speak. Then we talk Singlish!.

But when people start writing in Singlish it becomes a disaster.

Now ariff has been added with another knowledge and many new words for his vocabulary! Thanks!

Shall I give Ariff a Test?

And what about Tasha, Sarah Hana, Anis and Yas?????