If I was born in 1997 I would have a tough time right now coping with the pressures of being a female Muslim teenager, especially my sexuality.

There are all these early photographs of me ......... especially this one looking like a cool dude in my dad's shades, at the Singapore Botanical Garden when I was 4/5. 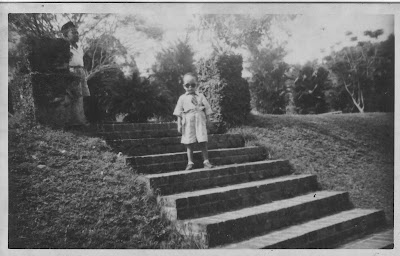 According to LGBT ideology this is most likely an indication of a non-female sexuality trying to 'come out' of the oppressed female/feminine Muslim's sexual ethics.

Should my parents be hauled over the coals for repressing my 'true sexuality'?  I think this is probably what they will say.

PARENTS:  ....... in the hope that it will catch, parents will dress up their daughter in boys' togs (mind you, not for all of the time) so that the next baby might turn out to be a boy.

And hey presto, it worked!  Mustakim was born giving them an ideal number of two girls and two boys.  Of course it's not as certain as going for a scan and then aborting the foetus if it's not the desired type.  After all, abortion is another much-vaunted human right like the right to happiness and freedom.  It has even been resorted to as a form of birth control for some busy women in Britain.

VFW:  What about this then? 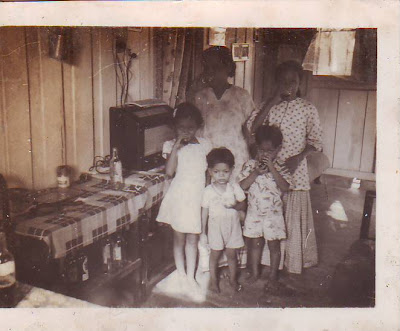 The scruffy kid on the right (front row) looks like a Hari Raya 1948/1949 version of Richmal Crompton's 'William'.

PARENTS:  Well, we can't stop her as she loves her boy's outfit.  We know she feels a little left out being the second child, stuck between the special first-born sister and the first son and the youngest one, you know, the second child syndrome.
But she seems comfortable and happy - we think she will grow out of it.  Children do go through such phases of wanting to be different, to demonstrate their distinct identity.

VFW:  What do you mean by that?  So you think that her dressing like a macho-male female is only a phase.  You believe that she could or would grow out of becoming a feminist/lesbian/transgender - that she will recover from this - like getting over a nasty flu?

PARENT (ABAH):  Hey, hold on a minute.  Where did you get the idea that a girl who likes to dress up as a boy is a budding lesbian?

VFW:  How about this picture then?  She's now 15 and she's still trying to express her true sexual identity - to escape this patriarchal cultural agenda. 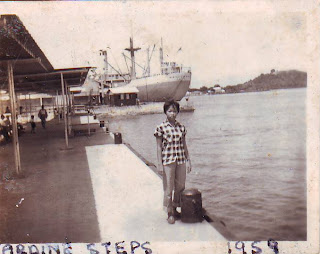 Above is the Kampung Abu Kassim 'samseng' at Jardine Steps sporting her butch hairstyle.

15 YEAR OLD TEENAGER (pleading) :   Stop it everybody!  Let me have my say.  I was born a girl and I'm happy to be one.  I love wearing those comfortable 'boy outfit' because I lead an active life riding bicycles, running around the backyard chasing the chickens in the evening to get them into the hen-house, wandering around the kampung with Mus cutting grass to feed the geese, cleaning the goose-house and uncovering their eggs  as well as cleaning the rabbit-hutch.  Also I love climbing up the hills along South Buona Vista Road (or The Gap) with my brothers - you can't do that wearing a frock or a baju kurung, can you?

Sometimes I dress up in the same girly attire as my sister which my dear ole mum had sewn for us. 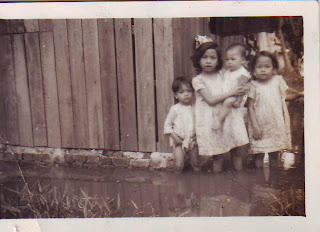 Admittedly till today,  my sister Maznah always, always looks prettier than me.  And she's a better cook too!

By the way Abah, what is a lesbian?

But Abah, I like boys too.  Did I tell you about my boyfriends when I was in Primary One? 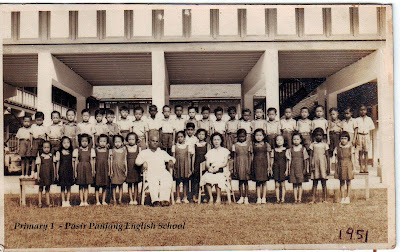 When I was thirteen, I fell in love with Ng Kian Ann.  It was a love that dared not speak its name because he was Guat Eng's paramour.  Guat Eng and I were always placed in the same team whenever we played netball.  You see, one day she fainted during PE.  When our teacher lifted her up, I had to tell the other kids to keep quiet (in those days, us demure girls never use the word 'Shaddup') and behave themselves - because they were all yelling, 'her knickers .... see her knickers!"

And then in 1957, on our last day in Pasir Panjang English School, before we all went to separate Secondary Schools,  Kian Ann waited for me at the bicycle shed ......

Abah, what's this "Seksualiti Merdeka"?  Has Merdeka got a gender?  Is it because freedom must be made more sexy?  Or is being sexy and doing all kinds of sexy stuff, freedom?  You said Merdeka has to do with seeing our country free from British Colonialism, of working hard and being responsible for our country's safety, well-being and freedom?

Datuk Ambiga Sreenevasan mentioned the "marginalised LGBT"  in the campaign for "Seksualiti Merdeka".  Can  the 'marginalised'   include the poor, the orphans, the single mothers, the drug addicts, abused children and women, the OKU, the alcoholics?  Will there be a "Merdeka" campaign for them as well?

I know now that 'L'  refers to Lesbians.  What is the meaning of Gay (G), Bisexual (B) and Transgender (T)?

The dictionary says  'gay' means mirthful and cheeky.  I am always a happy and cheeky little sod.  Does that mean I am Gay too?

ABAH:  Look, I've got a headache.  Please get on with your homework and then help your mother with the laundry and the gardening.

That's yucky work.  Can I wash the car instead and Mus can do the laundry?

Am I glad I was born in 1944.  Life was so much simpler for tomboys then, with no worries about being deconstructed by the Post-Modernist brigade.

When Hamid's daughter Number Two had enough of her wonderings and wanderings, Iain Buchanan managed to clip her wings (only with her permission of course) and got her started on wifely duties like cooking and marketing and sewing.  Strangely enough, she likes it. Mus, you refused to give me any chance to wash the car but you made up for it - years later - by introducing me to David Armand.  Thank you.

Salam AsH,
A belated aidil adha wish to you n yours.
This posting brought back memories of my favourite 'baju P Ramlee' - a red and white checked shorts and shirt ensemble which my late mother loved to dress me in.
And, of course, the close crop haircut which accentuated my round face and made it resemble a human coconut.
But the 'boy clothes' were certainly user-friendly compared to tight sam foo pyjamas or flounced frocks, which ended up ripped and tattered from frequent tree and bullock cart climbing stunts!
Dressing in male clothes had always been practised since the days of Tun Fatimah, or possibly earlier, when female clothes were simply not practical for silat moves and battle combats.
However, it doesn't make that the wearers any less feminine, in different contexts.

ahhh ... those were the days [am all misty-eyed now]

In the first gambear you're like a miniature mafia ! And of course the last one is my favourite - very stylo mylo !!!

As always, it's a joy to read your piece.

Do you know that the traditional baju kurung Pahang is actually worn with trousers? Perhaps to accommodate all those silat moves? Whatever the reason, it is not only practical but looks 'cool' too !

At the grand age of 42 I still have not owned a single piece of skirt or kain batik. Don't even know how to wear one.. hahaha.

Have a fun weekend.

Better late than never. I have erred as well in not communicating my greetings.
I like the sound/looks of your haircut - we call it the pudding basin style. Certainly trousers are more practical, very utilitarian especially for learning silat.
And they worry that Muslim women are oppressed.

And by the way, have you read the comments in your latest posting?

Were you a tomboy too?

Indeed it's all 'so far away and long ago'!

I like the miniature Mafia - could be a title for a horror movie!!

I said to Uncle, how my parents must have laughed themselves under the table, dressing me up like that.

I've learned something from your comment, about the trousers worn with the Pahang traditional baju kurung. I've often been tempted to do that but afraid I might have gone too far.

So now I can go ahead.

That's a great confession. I have loads of skirts and batik, but I don't use them anymore - especially now I'm nearer 70. You still have a long way to go.

Salam AsH,
No worries about the raya greetings.
But I do apologise for not noticing the comments from visitors to my blog due to the new dashboard format.
And I've already emailed re much anticipated meeting!

oh so u grew up here. i was born when u were 25 :) and ooh u had geese and chickens back then to play catch. cool!

You're still a baby in my book.But you can join me anytime - chasing chickens and playing with the geese and rabbits.

My siblings and I are very blessed - for the incredible childhood my parents gave us.

Thank you for piopping in